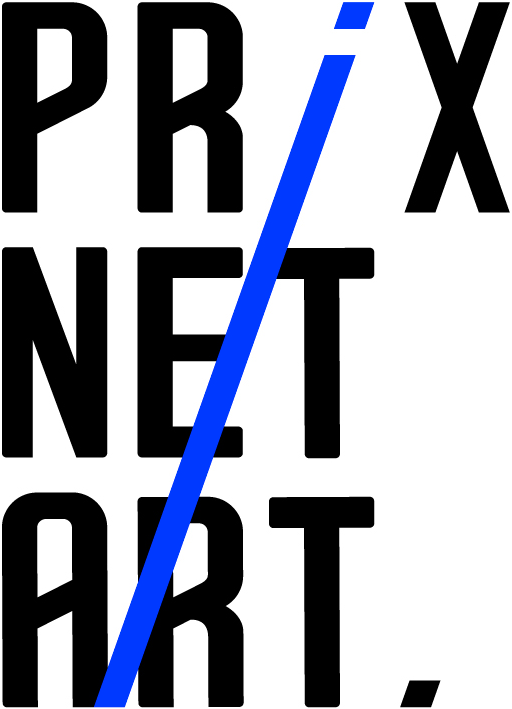 The internet is more than just a canvas, medium, or publishing platform for art. The internet is a system that links human and machine intelligence to produce politics, economics, culture, and subjectivities. To make "internet art" is to intervene in, or participate mindfully in, these processes.

For this inaugural edition of the Prix Net Art, the top award was given in recognition of the rich tradition of web-based art. Following the release of the first widely used web browser in 1993, a number of artists embraced the web for its aesthetic and political possibilities, particularly as a way of reaching far-flung publics with a minimum of resources. JODI were key figures in this generation, often disrupting the web—its HTML and other code—in order to make its processes and effects more transparent. Throughout their careers, they have remained committed to the internet, in its changing forms over the years, as a contested and vital site for artistic practice.

The Award of Distinction, in contrast, is given this year in recognition of future directions and possibilities for internet art. Kari Altmann's practice is especially important in regard to the changing role of the artist in a highly networked culture. Referring to her practice as "based in the cloud," she works as an artist embedded within internet culture, forming collaborations and sharing images across Tumblr, Instagram, and other social media platforms and apps. Altmann works fluidly across the web and the gallery space, considering each artistic medium as another kind of file format, and each artwork as a node in an evolving, collaborative, and networked system in which she is also a node.

While the selected artists have differing approaches—and, in fact, are only two examples of possible practice in a field defined by diversity of form—they both reflect a sophisticated understanding of the internet not simply as a space or an object, but as a series of processes. Through intervention and participation, they find ways to make these processes more comprehensible, and to contest and critique their effects.

JODI, or jodi.org – a Netherlands-based artist duo comprising Joan Heemskerk (1968, the Netherlands) and Dirk Paesmans (1965, Brussels) – pioneered web-based art in the mid-1990s. By radically disrupting the conventions and functions of systems such as webpages, computer programs, video and computer games, mobile apps, and other digital technologies, JODI's work destabilizes the relationship between computing technology and its users. JODI continue to work in the widest possible variety of media and techniques, from installations, software and websites to performances and exhibitions.

JODI's work is featured in most art historical volumes about electronic and media art, and has been exhibited widely at venues such as Documenta-X, Stedelijk Museum, ZKM, ICC (Tokyo), CCA Glasgow, Guggenheim Museum (New York), Centre Pompidou, Eyebeam, FACT (Liverpool), and Museum of the Moving Image (New York), among others. 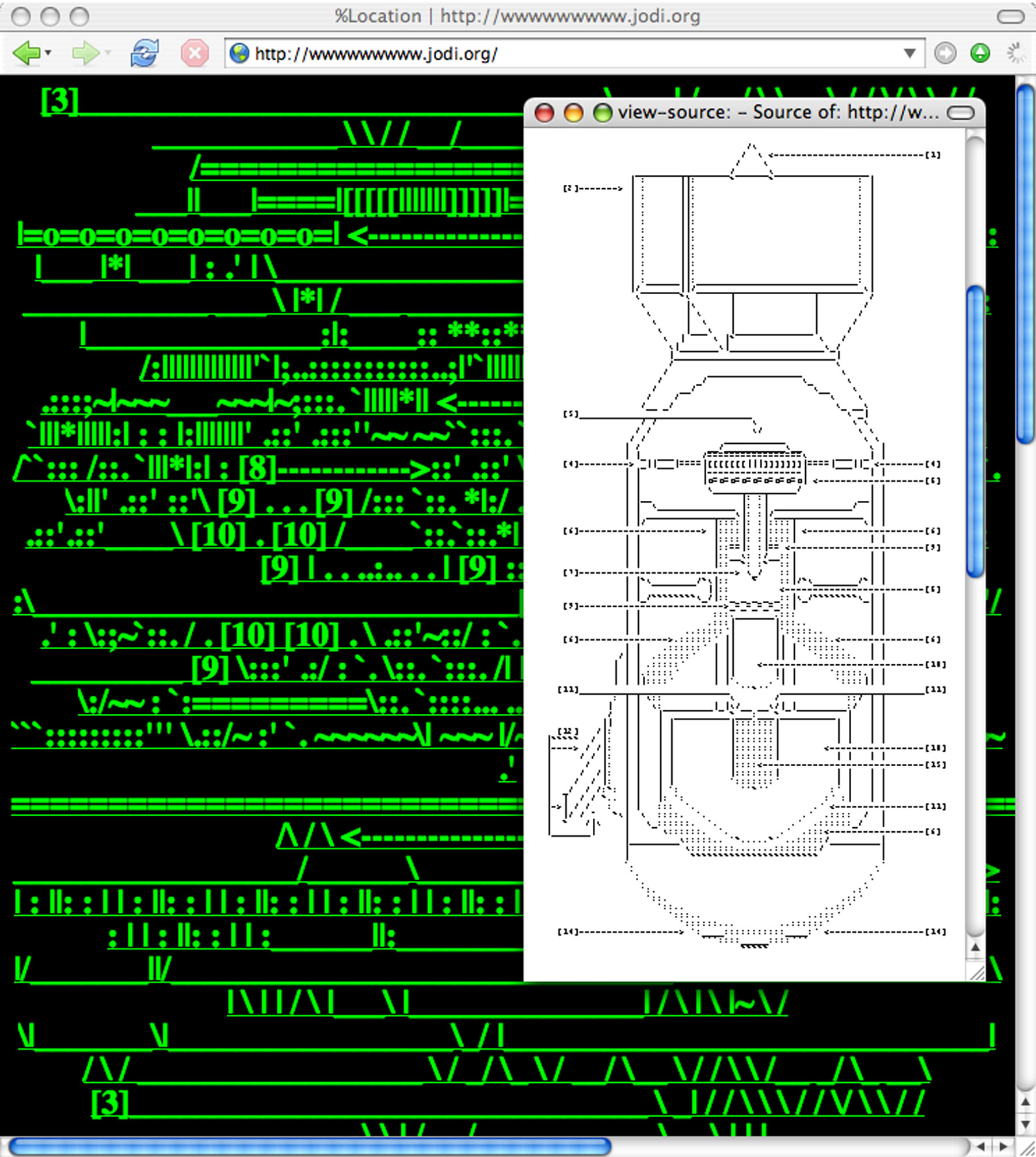 A screen of garbled green text looks like a broken website, until the viewer checks the HTML code through the browser's "View Source" function and realizes that the page is generated from a text drawing of a nuclear missile. The code also includes the <blink> tag, which in legacy browsers makes the text flash on and off, adding to the chaotic effect. 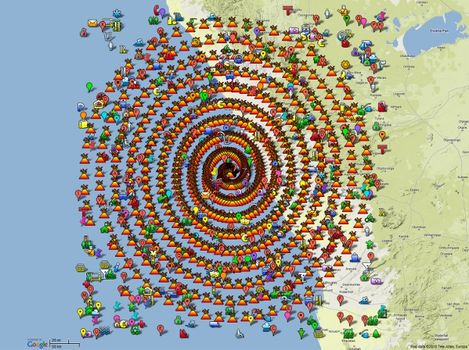 A software-driven artwork built on Google Maps that uses "dropped pins" and other default features for creating user-generated maps as the raw materials for a frenetic animation. 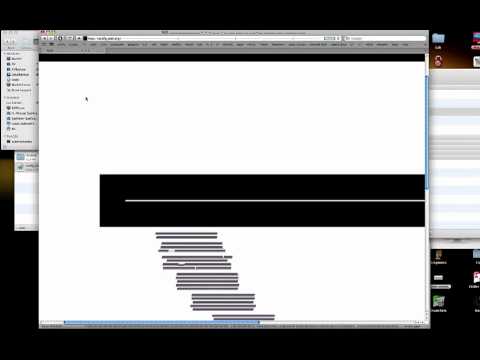 This website uses only a few lines of code to create an abstract animation consisting of rapidly changing blocks of black and white text displayed against flashing backgrounds. The site is broken up into a series of individual pages, each of which offers a slightly different variant and appears for a few moments before redirecting the user to the next in the series. 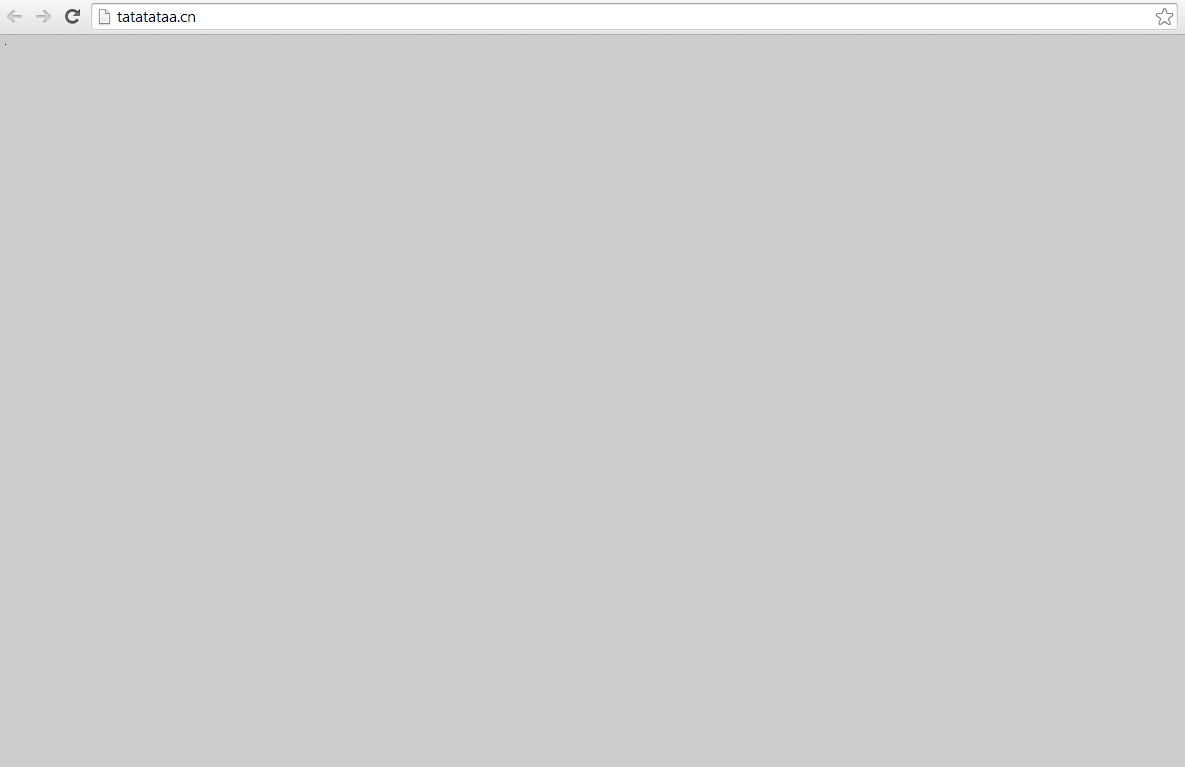 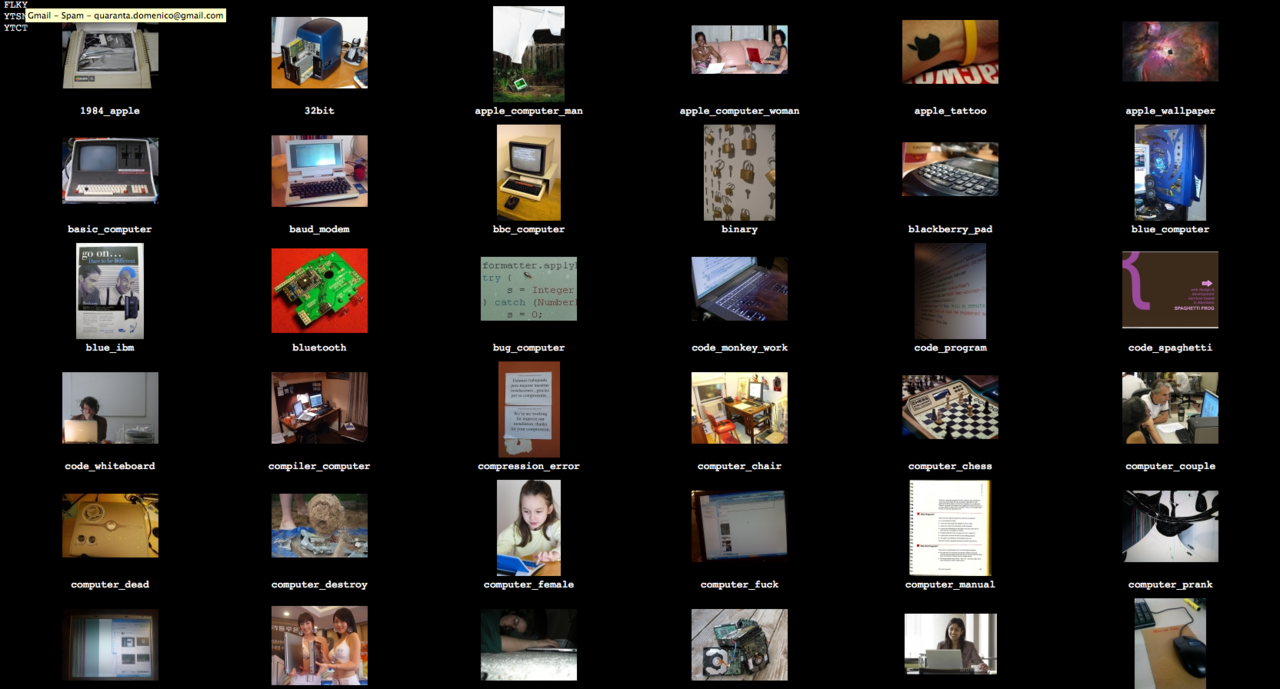 For this project, JODI collected and categorized a vast set of YouTube videos of what they describe as "people doing strange things with computers": smashing laptops, singing about their love of HTML, using keyboards as skateboards. Past iterations of the site have allowed users to choose from obscure categories such as "win" (for Windows) or "cub" (for office cubicles); the site now streams a selection of four videos at a time according to a predetermined logic. 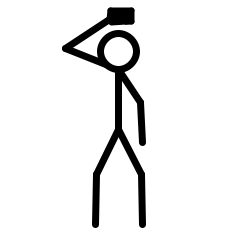 An app that uses the iPhone's built-in motion-tracking capabilities to guide the user through a series of pointless gestures. Each time a gesture is performed correctly, the phone clicks; when the full sequence has been completed, the device sounds an alarm in celebration.

Kari Altmann (1983, USA) is an American artist who works fluidly across multiple platforms and formats. Working in an online ecosystem of memes, brands, trends, algorithms, prosumer software, and other communal imaging systems, Altmann creates, tracks, and intervenes in microgenres of content that constantly evolve through her own online management. Her work often uses survival fantasy aesthetics from various sources to create new imagery that pushes this visual logic to its extremes. She circulates the resulting images back through her social networks, where they generate new meanings and versions. A resulting work can take many forms, from a reproducible meme to an installation of objects and performers to an audio mix. Altmann is one of the most influential artists involved in recent discourse around the term "post-internet" and its offshoots.

Recent featured projects include a solo web commission, Soft Mobility Abstracts, for the New Museum, New York; "Extinction Marathon" for Serpentine Gallery, London; and "Art Post Internet" at Ullens Center, Beijing. She has done projects for and with Art Dubai, The Goethe Institute, Fade to Mind, Rhizome, Mixpak, Dis Magazine, Nero Magazine, and many more. She also collaborates with peers in many industries as an artist, creative director, and ghost producer. 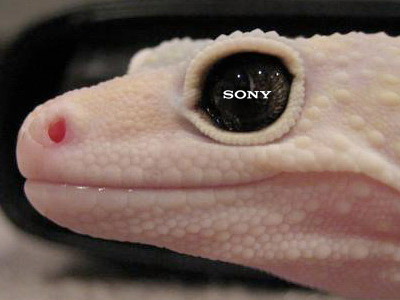 A collaborative project initiated by Kari Altmann in which a network of participants (described by the artist as "search bots for each other") search and arrange content into evolving categories—"new black market civilizational tropes," per Altmann. The evolution of the project's organizing logic could only be fully grasped by following the network over time: "Posting an image of a Toshiba TV with a canyon on the display could yield 10 videos of Toshiba products, 4 variations of demo canyon imagery, and 20 images of name-brand displays almost instantly."

Read more about this project here. 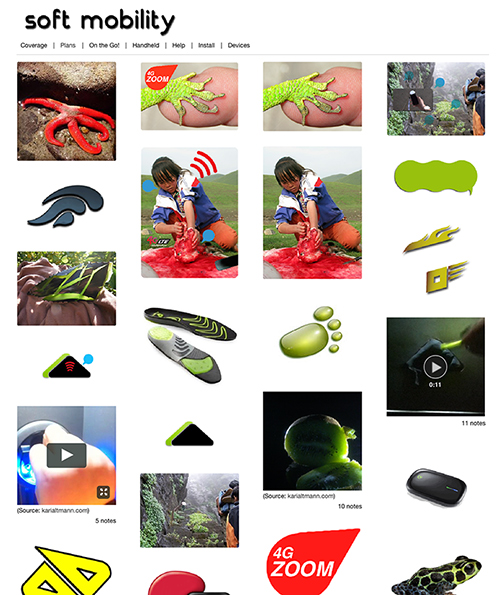 A stream of content that evolved across multiple platforms, including Vine, Tumblr, Instagram, and a standalone site, Soft Mobility Abstracts takes the logic of art direction and branding around “mobility” to an ambiguated extreme. Altmann's image stream evoked a merging of urban and off-grid survival actions, the tactility of card swipes and the hard, hi-tech surfaces of smart cities. 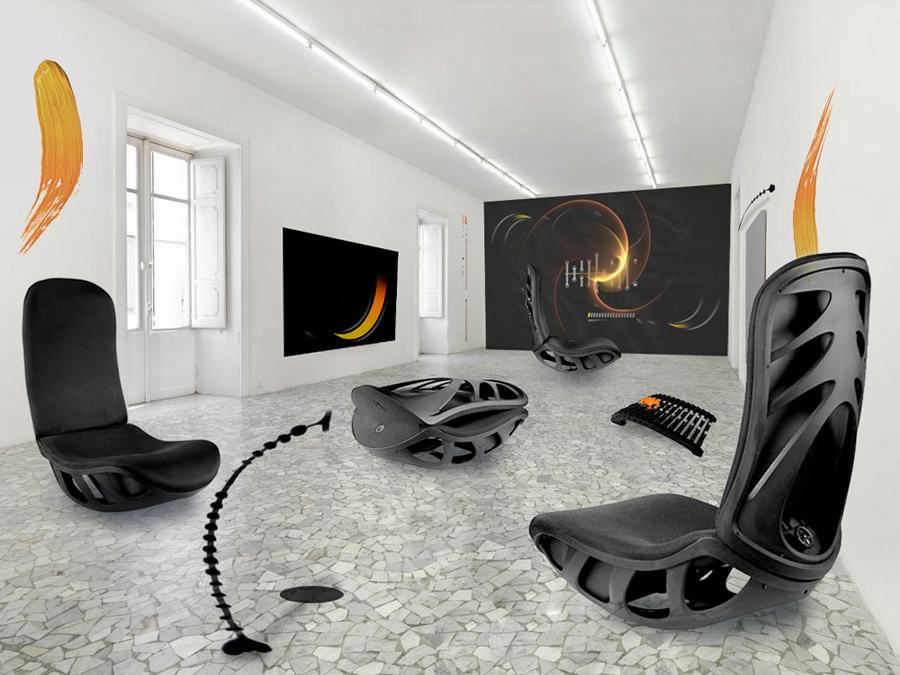 Altmann organized a series of similar content about action and acceleration into this small installation that took the form of a digitally-manipulated jpeg. After circulating only as a digital file, Resting Point was turned into an actual installation in 2014; documentation of this exhibition was then fed back into the network where it continues to evolve.