This post is part of Wavelength, a series of guest curated sound art and music mixes. 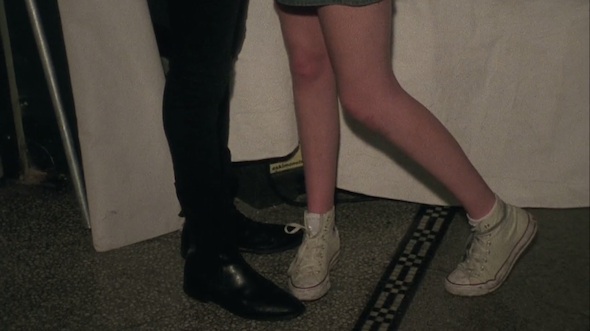 Still from the music video for Mount Kimbie, "Carbonated."

"What do you want to make of your life? A cruel question, when it is not a naïve one. What is a life if not a definitive unmaking? Whatever the gibberings of profane man, it is not open to us to make anything of ourselves."

–Nick Land, The Thirst For Annihilation

"Perhaps the young of this generation haven't the stamina to launch the epochal transformation they seek; but there should be no mistaking the fact that they want nothing less. 'Total rejection' is a phrase that comes readily to their lips, often before the mind provides even a blurred picture of the new culture that is to displace the old."

–Theodore Roszak, The Making of a Counter Culture

Alvin Toffler's seminal book Future Shock (1970) posited the modular man, the disposable person, as one of the fundamental units and products of an urban, post-industrial society. We interact with specific modules of a person rather than the full human.

Modular youth, then, is a play on modular man, and on Youth Mode, the title of a recent report by artists/trend forecasters K-HOLE and Box 1824 arguing that youth is not about age, but about endless adaptability. Modular youth is also the senselessly fluctuating standard to which we compare our own nostalgic and formative experiences ("kids today"); less a fundamental unit of post-industrial society than its abhorrent ideal. If Kevin Spacey in American Beauty embodies K-HOLE's "youth mode," then The Social Network's portrayal of Mark Zuckerberg embodies modular youth: ever-curious, pioneering, innovative, boundlessly energetic, and terrifying. The elite, amoral programmer, forging systems, is our answer, for better or for worse, to the progressive, futurist theories championed by Filippo Marinetti: reality is bound to the imaginary, reshape the former accordingly.

Once the modular youth has everything: resources, connections, access, all the information of the world at its fingertips, where to go but inwards, self-consuming? How to grapple with the truth, of being bored, privileged and permitted all: of being individuated to the extreme? How to frame a group so capitalist-realist, so neo-materialist that they can both "readymake" and "unreadymake" objects at will? Here, is the space of more acidic, cynical outlooks on consumerism and its bounty, where modular youth rages to find a foothold, somewhere in the intersection between The Rules of Attraction and Serial Experiments Lain.

Take the recent nostalgia-realist teen film Palo Alto, in which there's one vague, stale mention of a blog. All other forms of social media or cellular connection are completely absent. The ideal young viewer, in 2014, watches Palo Alto and says, "That was my experience." (We're so elite, that we control our own past). This is the ultimate ideation of modular youth: falsifying, crystallizing myths through modern media and technology. They slide fluidly between references to industrial, post-industrial and digital culture because they can, because this movement is the function of privilege. Thus, the shifting axis upon which modulation occurs.

On an aesthetic level: young people produced by internet culture are the most comfortable with jarring, bleak alienation, with schizophrenic media, its broken images and distorted, fragmented sounds. The music of modular youth flirts with newfound technology, then immediately disposes of it. The synth, represented here in early compositions from Dick Hyman and Klaus Schulze, evokes expansion, technological (and in some ways ecological) progress. If the synth is representative of a tangible, malleable material, then the distortion and reverberation of known physical objects (voices, guitars) on some tracks would be the unwieldy ecological situation bending backwards to eventually engulf the traditional whole.

With this playlist, we wanted to gather a series of aural objects that ultimately evoke a wasteland in which the modular youth roams. Our hope is that these tracks stumble and crawl through a barren landscape of chewed up materials. All this ruin manifests in a mood, found in the overlaying Perec-esque poetry of the titles: "Where Will You Go When the Party's Over?" Anywhere, because, really, "Life Ends at 30." This is Toffler's "throw-away society," one of barren potentiality, in which the promise of accelerated, cybernetic bliss turns to ruin, and liberalism is taken to its limits.