Welcome to Your New NSA Partner Network: Report from Transmediale 2014
By Jonah Brucker-Cohen

We're running our annual community campaign through March 19. Give today!

A kind of cold weather antipode of summer's "Love Parade," the Transmediale 2014 media arts festival was a beacon of light in the long dusk of a Berlin winter. As a twist on the usual curated exhibition, this year's festival opted for an ad-hoc "Art Hack Day" (AHD) approach, where submitting artists were expected to create new and original artworks in the span of two days (and nights). Opening the exhibition with a more down-to-earth feel, AHD ultimately resembled a DIY, garage-style party instead of a highbrow exhibition space.

I was invited to participate in AHD along with 90 other international artists to create projects based around the festival theme of "Afterglow," a natural phenomenon that occurs in "deep twilight," right after sunset, when dust that is suspended in the stratosphere captures the sun's rays. In his introductory speech, festival director Kristoffer Gansing described this moment as one of both reflection on the recent past and anticipation of what will happen in the day or days to come. Evoking the passage of time and the prevalence of dust, the title also refers to the advent of waste and the postdigital question of how to account for the large amount of electronics we consume on a daily basis.

In addition to the AHD exhibition, three artists were invited to install existing works to complement the hacks, rounding out the main space of the Haus Der Kulturen Der Welt (House of World Cultures, or HKW) with a lively mix of surveillance diatribes, personal data acquisition efforts, and cultural stampedes of mixed medium and introspection. The goal of the festival was to imagine ways to make data tangible again by exposing the undercurrents in global surveillance, government conspiracies, and our increasingly technology-dependent, database-driven lives. 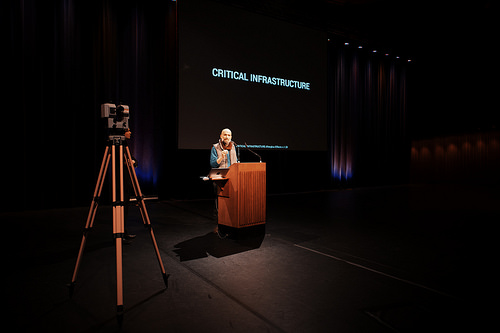 One of the invited projects, Jamie Allen and David Gauthier's Critical Infrastructure, filled up much of the main lobby space of the HKW with archaic-looking yellow survey tripods typically used by urban planners when developing infrastructure projects. Visitors could look through the viewfinders to see visualizations of data sets, ranging from how many Facebook "Likes" had been registered on the venue's wifi network to information harvested from the internet, such as the percentage of the global population who exhibit worry. Critical Infrastructure was a comment on the increasing surveillance of our daily online lives by major corporations who mine this data to sell to advertisers for commercial profit, as well as a survey of  the information pathways traveling through the conference itself. Allen called this a "collection of digital data detritus" that makes visible the sheer excess of data collection around each participant—more data is collected by the NSA and other data agencies than could be put to any imaginable  purpose—and serves as a general critique of data, dramatizing the gulf between the measured world and lived experience.

Bruce Sterling, who gave the opening keynote, went on his typical rant about how artists are forced to create work from things they can't control, such as GPS and data surveillance networks. He then explained that the NSA was present at the birth of computation as a form of information gathering and as a control system. Sterling believes that this methodology has now transferred over to corporations such as Google, Facebook, and Amazon, who are mining their customer's data to feed into a growing advertising algorithm that will ultimately target us for ads before we know what we want. This realization was coupled with the prognoses that "the rot of data is our heritage, stop pretending that bits don't decay, the internet of things is at hand, and that corporations such as Apple, Microsoft, Dell, Facebook, and Google are impositions that destroy [one's] self-respect and self-esteem." This type of prophecy was evident in most of the panels, speakers, and overall discussions around the conference floor. It is precisely the fact that these kinds of future-facing topics abound at Transmediale that makes the festival a much more interrogative platform and exchange layer for visitors, artists, and attendees than most of the other big media art festivals around the world.

Enriching this theme of controversy and infiltration were talks and presentations by NYC-based artist Trevor Paglen and Berlin-based filmmaker Laura Poitras, who famously holds a copy of the full disclosure of NSA whistleblower Edward Snowden and is working on the final film in a trilogy about post-9/11 America. Paglen is interested in developing new ways of seeing by uncovering the contradictions between materiality and secrecy. His work documents the visible traces of top-secret activities: photos of classified locations and equipment, such as military space telescopes that spy on unassuming populations from the sky, or the NSA campus itself. 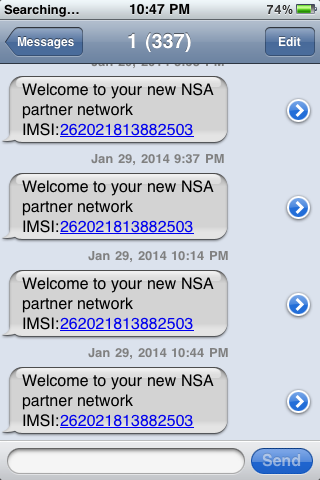 Both speakers sketched an eerie backdrop to the surveillance-related project PRISM: The Beacon Frame by Julian Oliver and Danja Vasiliev. The project's software, running on a small computer in a darkened gallery space, searched for devices in its vicinity and broadcasted messages to them. As it did so, it projected a log of its activities through a rotating glass prism onto the gallery wall, resulting in a shifting, refracting flow of data. Since the artists were not only looking for computers but also cell phones in the gallery space, it would send SMS messages to anyone present with ominous messages, such as "Welcome to your new NSA partner network," followed by a link to the project. A real-time log of these activities was then projected through a rotating prism onto the gallery wall, creating a light show from the surrounding technological landscape.

While perhaps coming across more innocuously to those in the know, the project nevertheless scared someone enough to report it to the German Police, who instructed the festival's curators to shut it down. This controversy, although rather benign for a festival used to taking so many risks, was the ultimate compliment to the artists—since perhaps the greatest form of success for a surveillance project is to have it shut down by the authorities.

Ceremonial Chamber by the Portland, Oregon-based artist collective MSHR (Brenna Murphy and Birch Cooper; pronounced Mesher), is a sculptural installation and an instrument that plays both light and sound. It features light and audio feedback systems with an interactive element consisting of an incandescent light table powered by a color organ that breaks the light into three color groups. The project is entirely analog, with an audio input into the organ that turns lights on and off based on the pitch, which ultimately creates a feedback loop on the sound. The aesthetic beauty of the piece lays in its visual design: the table? was decorated with motifs evoking totem pole art and hieroglyphics. MSHR performed the instrument twice during the festival, wearing space age eyeglasses that simultaneously conjured past and future. 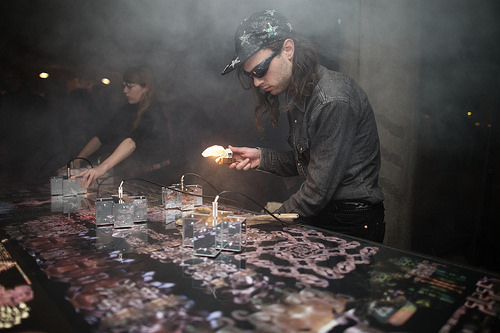 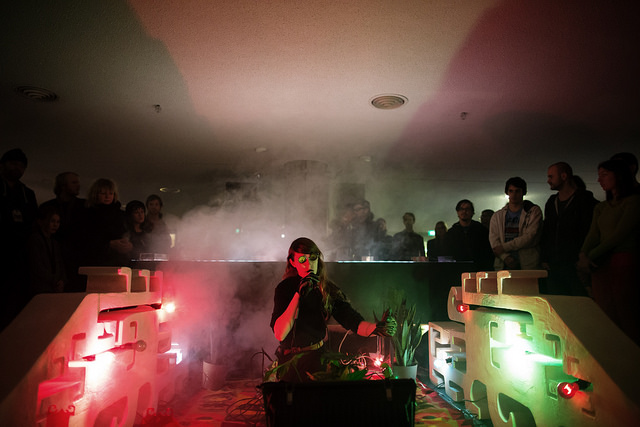 The Art Hack Day component of the festival, organized by San Francisco-based artist Olof Mathé, LEAP (John McKiernan, Daniel Franke and Kai Kreuzmüller) and transmediale, featured various pieces all created in three days of hacking, exploring, tinkering, and making. Responding to the theme of "Afterglow," artists aimed to create projects in a three-day stretch that took into account the ephemerality of data in an age where data-gathering is all important to any aspect of life online. One of the standout pieces of this component was Dennis Debel's smoke signaling device for the iPhone, which allows its user to send smoke signals from the phone itself, which are then transmitted via the built-in camera and read on an app on the receiver's device. Debel is convinced that there is a better way of achieving personal communications than centrally-controlled social networks. "To me, the internet doesn't exist anymore," said Debel at this artist presentation, "it's now become a system to help companies gain revenue with your personal data."

Other projects in the field included Bit by Bit (BbB) by Justin Blinder and Benjamin Gaulon. Subtitled as a "Cloud Shrinking" project, it fused the artists' interest in digital waste, attempting to delete user-generated information from the internet. BbB displayed the latest PasteBin.com uploads and simultaneously sent a ceast-and-desist email to its author to take the content down. The file was then projected onto glow-in-the-dark inkand a few seconds later, immersed in black space, causing the file's information to "fade away" to invoke its deletion from the cloud.

My project in collaboration with Michael Ang, an interactive installation titled PrintCade, used recycled arcade joysticks and buttons from the 1980s to control an old printer and generate sound. The project aimed to reimagine discarded technology as a hybrid video game console built into the physical world.

As the festival wound down, one of the central themes to emerge was how long we must persist in a technology-dominated society where we ultimately have little control over how our information is disseminated and spread over the vast data landscape of communications networks. The myth of the blameless user or clueless Internet Service Provider was debunked in both the three-day AHD event and the presentations of countless speakers, who kept reiterating the theme of privacy being stolen from us by the companies and organizations that are also trying to earn our trust. Perhaps it would be best summed up in the words of usability expert Donald Norman, who poignantly spoke about how Google's power is not with its search algorithm, but its advertising empire that feeds on the masses: "[Google] has lots of people; lots of servers, they have Android, they have Google Docs, they just bought Motorola. Most people would say 'we're the users, and the product is advertising,' but in fact, the advertisers are the users and you are the product. They say their goal is to gather all the knowledge in the world in one place, but really their goal is to gather all of the people in the world and sell them." Taking this perspective as its starting point, Transmediale remains one of the most controversial and auspicious risk takers left in the mainstream media art festival circuit, and this year's festival further enforced that distinction.