TEDxVaduz: Towards a new future through a moribund format
By Lucy Chinen 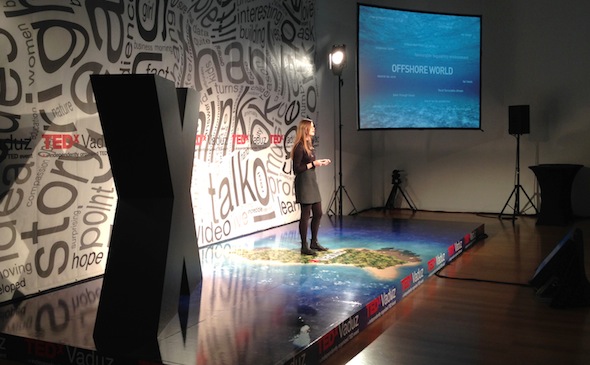 From the outset, it was clear that TEDxVaduz aimed to work both within and against the context provided by the TED brand. Denny opened the event by giving a brief history of TED and the TEDx conferences. Keller provided the current context of TED, its format and the recent criticism due to presentations that relied on pseudo-science. Denny highlighted the elements of the TED brand that match his and Keller's interests, such as Silicon Valley and tech entrepreneurialism. Denny also noted that the backdrop, a tag cloud comprised of most used words in TED talks and the floor graphic of an island shaped like Vaduz, was a collaborative design by the two.

TEDx Vaduz involved speakers with various professional backgrounds, working legislatively, empirically, theoretically, and artistically. The event's 12-minute time slots proved a real challenge as the format required extreme compression of months, and for many of the speakers years, of research. Many of the artists who spoke actively observed present trends to speculate on abstractions of the future. With artists presenting alongside other professionals, it became evident that radical claims within theoretical or academic research fields were no less imaginative and playful than those made by artists. A few of the highlights are summarized below.

Femke Herregraven, an Amsterdam-based designer and researcher, presented various concepts that run through her areas of research such as geographies of avoidance and finance's ability to carve out new geographies through spatial organization. Her research is drawn from places of legislation and the ambiguity of language in administration, which leads her to the materiality of secrecy and silence of exchange in her design projects.

Regula Stämpfli, a Swiss-born political theorist based in Munich, started her talk by saying that in Switzerland, she is known to be quite outspoken. In her bio on the TEDx site she quotes the Neue Zürcher Zeitung referring to her as "the pain-in-the-neck from Brussels," whereas her students have called her "the Lara Croft of Political Science." Appropriately prefaced, her talk pertained to the politics of how women are represented in the sphere of governance, the auto-categorization of women on online platforms like Google, and scientists' lack of reflection about their gendered analysis on society. One quote from her first slide read:

1 cliché is laughed at

Emily Segal, an artist and brand consultant based in New York, spoke about the luxury brand, its relationship to scarcity, and luxury's ability to also be mass luxury. Segal addressed discomfort and what makes us uncomfortable about consumption, which relates to luxury brand's reliance on scarcity in a place of mass crisis. She traced the fundamentally uncomfortable path of luxury itself, which leads to a search for specialness, which leads to a search for authenticity, which leads to the luxury of choosing utilitarian non-specialness, summarizing the formula of the MA-1 bomber jacket, a status symbol of not being special.

Michel André Maréchal, a behavioral economist based in Zurich, presented his research in laboratory and field experiments with corporations, non-profits, and governmental organizations. In particular, he focused on the economic and behavioral aspects of crime, offering possible alternatives to imprisonment concluded from behavioral analysis of group identity formation. Openly stating that his cross-disciplinary research can be considered experimental, his empirical findings were very narrative and at times statistically whimsical. He closed with this remark about imprisoned environments strengthening criminal identity:

In his recent TED talk about the problem with TED at its recent conference in San Diego, Benjamin Bratton criticized the placebo politics and misdirected faith in technological answers embodied by the KONY 2012-stained TED brand. Where TED is meant to anticipate solutions to global problems, it really never addresses underlying structural issues, focusing instead on neatly packaged ideas and gadgets ready for airdrop in to any crisis zone.

Can we conclude that TED is a pointless outgrowth of venture capital blindness? Perhaps it isn't entirely devoid of possibility. While we critics fall into cynicism about futuristic solutions to current problems, there is a need for other ways to think about the future. The question, "so what now?", is becoming inescapable. One crucial problem with the TED brand isn't a lack of ideas, but the sameness of its presenters' positions. While bringing people together from different expertise is valuable, it's only beneficial if these ideas also have room to be in opposition to each other and the broader world.

Mobilizing the TED brand in order to bring exposure to experimental but legitimate research and artistic practices, TEDxVaduz served as an alternative to the general expectations surrounding a TED talk. Each person's presentation was a performance in the sense that giving a presentation is always a performance, but there was no pushing of a recently published book or listing a long tail of founded companies. The variety of positions represented resulted in a considered curatorial project within the widely debunked and soon-to-be dated format of TED. Indeed, the TEDxVaduz strategy of occupying an outdated structure and opening it out to new possibilities might offer a key to the broader problem of how to refocus discourse about the future away from technological solutionism.