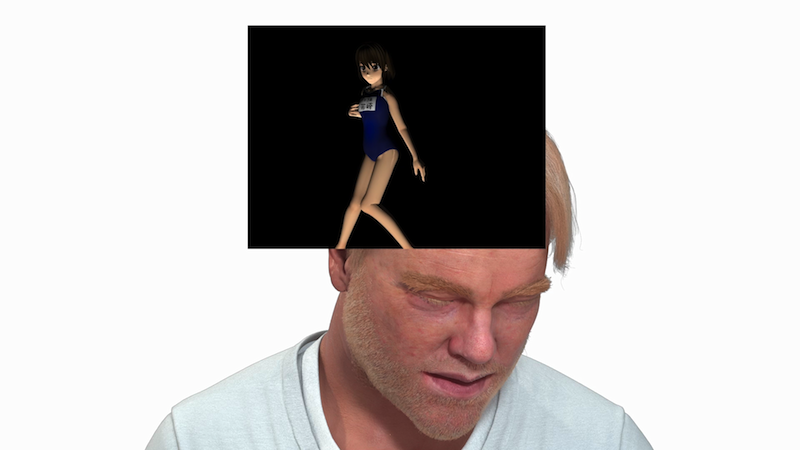 Cécile B. Evans, Hyperlinks or it didn't happen (2014). Still frame from HD video. Courtesy of Seventeen.

Media saturation in the internet's "cut & paste" ecology has become so naturalized that contemporary film's collaged aspects are not readily considered. Who are the subjects in, for example, a Ryan Trecartin and Lizzie Fitch film? And for whom do they perform? When I show these films in my class, my students switch tabs in their browsers, Snapchat each other, like photos, fav tweets—often on multiple screens at once—then state that this "work is about strange fake-tanned kids' search for a toilet."

What has made this answer stay in my mind pertains to the word "about." When used for these works, the banal statement "this work is about…" registers as a crisis of categorical closure that the simultaneous existence of disparate, accumulated content on a single screen constantly thwarts.

Central to Cécile B. Evans' show Hyperlinks at Seventeen Gallery in London is the video-essay, Hyperlinks or it didn't happen, displayed on a high-resolution TV with headphone cords installed at a comfortable cartoon-watching height in a corner of the space. Entering at the opposite corner, I navigate the gallery space, attempting to link the objects together—a prosthetic leg atop an upturned Eames chair replica near a rubber plant that counterbalances a plexiglass structure supporting 3D-printed arms (One Foot In The Grave, 2014), another Eames replica sitting in one corner (just a chair), various prints on the floor and walls—before sitting down, cross-legged, on a thick-pile rug strewn with postcard-sized images. 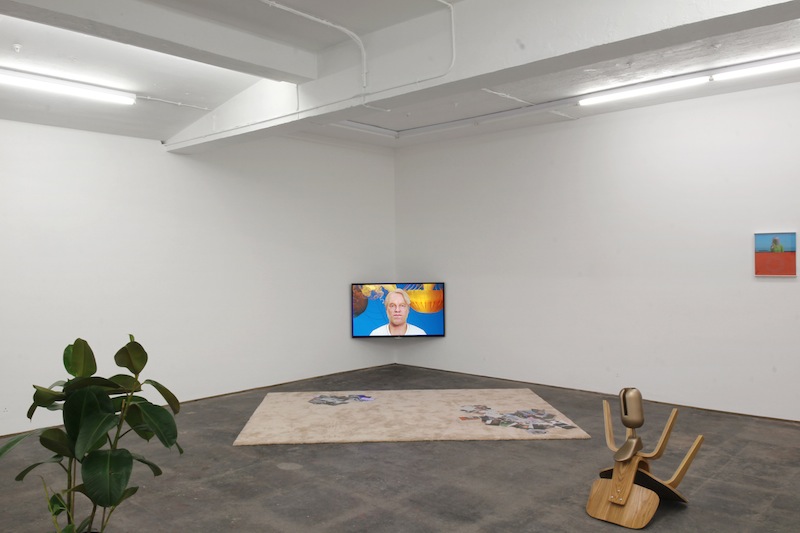 The film begins with a super high-resolution render of actor Philip Seymour Hoffman's head floating over the shimmering image of a jellyfish. "I'm not magic, and please don't call me uncanny," says a synthetically-augmented human voice. "I'm just a bad copy made too perfectly, too soon." The video lingers on Hoffman's face. His lips do not move — at least, not in sync with the voice claiming to be the bad copy. "Fuck. Fuck FUCKING FUCK! I am full of him." An audience laughter track plays. The bad copy's hair flutters as his head bobs. The follicles on his nose look like they'd be the perfect environment for a blackhead to take up residence. The subject floating on the screen does not symbolize Hoffman, rather, it is an improper metaphor for the actor's "untimely death'; for anything that transcends description, yet is saturated with meaning nonetheless. Hyperlinks is so full of meaning that, as the voice suggests, it is set to burst.

Evans wants us to feel uncomfortable at the absence of an uncanny feeling, and by referring to this lack directly in the monologue of the simulated voice, she sets up a relation the viewer and this, a highly stylized, digital avatar. Hoffman, the image-thing, is not really a metaphor, nor is he really a copy, a simulation, or even a simulacrum of a more-real body. Hoffman, the image-thing, is literal and actual, perhaps more so to the viewer than Phillip Seymour Hoffman, the flesh-and-blood human or his "untimely death" was/will/could ever be.

In her 2010 essay A Thing Like You and Me, Hito Steyerl defines the image as a thing whose "immortality… originates… from its ability to be xeroxed, recycled, and reincarnated." [1] Like the postcards strewn throughout Hyperlinks, the floating, self-referential Hoffman points out a literal truth: Hoffman's head is an "improper metaphor" [2] for the image that it actually is.

Catachresis, a term we can employ for such "improper metaphors," is a forced extension of meaning employed when "when no proper, or literal, term is available." [3] According to Vivian Sobchack, "catachresis is differentiated from proper metaphor insofar as it forces us to confront" [4] the deficiency and failure of language. In linking across the gap between figural and literal meaning, catachresis marks the precise moment "where living expression states living existence." [5]

The image-things of Evans' film are similarly analogically hyperlinked to the metaphors they supposedly express. In several sequences, an invisible, green-screened woman wanders a beach with a man who we are told is her partner: the nameless protagonist of Ralph Ellison's 1952 novel, The Invisible Man. For a few seconds, we are confronted with Marlon Brando's floating head, isolated from scenes deleted from Superman II (1980) to be digitally repurposed for the 2006 film Superman Returns, so the actor could reprise his role as Superman's father two years after his death.

The vocaloid pop-star Hatsune Miku serenades us with the song "Forever Young," referencing her own immortality in the server banks and USB sticks that confer her identity. We then see, rolling onto a stage in Canada, Edward Snowden gives a TED talk on taking back the web, through a "Telepresence Robot" (an object that looks like a flat-panel screen attached to a Segway). As in a collage, the film splices and dices contiguous space and time, producing a unique configuration of catachretic associations, rather than a continuous narrative about something. Fictions are interwoven with facts, gestures with statements, figures with subjects. Moving about the gallery, the viewer hovers about the strewn postcard-sized images of a counterfeit Kermit the Frog, the render of Philip Seymour Hoffman, and the "hologram" of Michael Jackson. The image-things in Evans' work seem to exist beyond subject/object distinctions, outside of sense, above their own measure of themselves —selves that they, nonetheless, frequently seem to be measuring and re-measuring.

The exhibition comes with its own printed glossary of terms listing references the video makes. The first term in the glossary is "Hyperlink":

A reference to external data that a reader can open either by clicking or by hovering over a point of origin. From Greek hyper (prep. And adv.) "over, beyond, overmuch, above measure."

Here again the figural and literal are called into question. In relation to what can one say the "external" or "beyond" of a hyperlink resides? Why is the etymology for "link" not also given? Though at first, the glossary seems to map the associations, the links, of the disparate imagery presented in the show, it is suggestive of the total-work, presenting an almost anarchistic circulation of imagery as a coherent system. The glossary's reification of associations gestures towards also the internet's systemic interpellation of our networked subjecthood; as well as in the film title's reference to the phrase "Pics, or it didn't happen," the show's contrast between a body's lifespan and a circulating digital image seems to also echo of our status as "poor copies" of our digital semblances.

The image-things in "Hyperlinks" serve – to hijack the words of Scott Bukatman - "as the partial and fragmented representations that they are." [6] . Through the works' superfluity of associations and meanings, I found myself considering the impossibility of categorical closure. If totalization means incorporating all disparate things, an ultimate difference erupts: a moment that also signals the deficiency and failure of systemization itself.

What makes Evans work successful is this endless calling up of the specter of the beyond, the outside, the everything else, from within the perceived totality of the internet. With the glossary, the totality of the show almost feels performative, gesturing towards the systemic totalizing we confer onto art objects in a gallery space before, after, and, especially, during their imaging. But image-things are considerably more liberated than either objects or subjects. They are more real, precisely because we recognize them as images.