Post Whatever: on Ethics, Historicity, & the #usermilitia
By Jimmie Tiptree Jr

Originally published in a different form in You Are Here: Art After the Internet (Cornerhouse Books, £15.95. Edited by Omar Kholeif).

I'll start by making two claims, which I won't return to since they speak for themselves, and because they are—as far as I'm concerned—incontrovertible. With the first, I'm paraphrasing Nicholas Mirzoeff in saying that post- should not be understood as "the successor to," but as "the crisis of." Having established this, the second claim aims to get one thing straight: every artist working today is a postinternet artist. Let's move on.

The modern-millennial hubris around newness (and, by extension, youth; and, by extension, technological progress, accelerationism, and neoliberal futurity) is epitomized by breathless discourses around the seismic, revolutionary, never-before-seen newness of the internet and surrounding technologies—and echoed in initiatives like 89plus. This feels especially damaging when many of us have been living in an essentially striated (e.g. sexist, racist, homophobic, transphobic) world for as long as anyone can remember. One of the few strategies for imagining a better, fairer world is the idea that things have not always been this way. Another strategy is the practice of intergenerational discourse, or learning from—and railing against—one's elders and forebears. Until recently, this was a required part of any art education—or indeed, any coming of age rite, even if the balance between "learning from" and "railing against" might vary across cultures.

Now, however, the notion of the "digital native" seems to draw a division—and implicit hierarchy—between those who have enjoyed access to networked technology since childhood and those who have not. This division may or may not be correlated with age, race, class, gender, and geographical location.

Another school of thought holds that the novel psychosocial situation in which we find ourselves postinternet has given rise to unprecedented fragmentation, narcissism and alienation in the social status quo, although it seems unlikely that the contemporary condition should be qualitatively different from any other technological or teleological shift in human history. Current anxieties that the internet may be making us stupid (or lonely, or sexually aberrant, or socially dysfunctional) echo Plato's worry that the widespread practice of writing would destroy oral literacy and the ability to create new memories.

As it happens, timespace as heterogeneous singularity is not unprecedented in human history: the dreamtime of the indigenous Australians in which past, present and future were held in symbiotic tension, is known as the "all-at-once-time" as opposed to the one-thing-after-the-other-time that we all became accustomed to in occidental modernity. The first synchronous electric clocks—the ones we now see on the tower-most parts of monolithic modern architectures—were introduced only in the 1920s. A synchronous electric clock has no inherent timekeeping properties, but runs at the frequency of the electrical power source, which—when coupled to an electric motor with the correct gearing—drives the clock hands at the correct time. Even time—as we know it—is virtual: a technological construct.

The self, by which I mean the essential consciousness, exists nowhere per se, but is located in time and space. In this sense we are all, to some extent, virtual beings. What Marc Augé calls a "non-place" is what Rem Koolhaas calls "junkspace," both of which summon Virilio's writing on interstitial space, or through-spaces: airports, hotel lobbies, shopping malls—places one travels, rather than inhabits. Travelling is subject to any number of contingencies and may operate over various time zones and at various speeds. This shouldn't be news to anyone, yet somehow any modal shift in the fabric of social timespace seems to produce a set of cultural crises that keep a roaring trade raging over on the commentary circuit. It's as good a way to make a living as any other.

Every commentator wants to distinguish [him]self from the dumb user who clicks and swarms and emotes all over every platform, zombie-like and addicted, generating the demographic data that provides PhD students in media studies and digital anthropology with their raw material. These distinctions may be seen as ways to demarcate class signification in an economy of symbiotic flows in which labor has itself become both commodity and production process. Scott Lash observes, "In the modern and industrial order the instrument (industrial capital) becomes the end. … That is, ideology—as a superstructure—functioned as a means to the end of the accumulation of industrial capital. But now, as Eco observes, information itself 'becomes the merchandise.'"[1] Contemporary technologies—including surveillance systems, social networks, production techniques and reproductive processes—have been marshaled and instrumentalized by artists and conglomerates alike.

Nobody wants to be seen as the serf of the field who wastes [her] plebeian life away in the data mines of Zuck's blue book; just as nobody wants to be seen taking selfies in public, or living the unexamined life of the content producer whose sole agenda is to validate an otherwise pointless existence in a stream of Instagrammed meals-for-one and YouTube vlogs about makeup or pop stars or serialized teen fiction or any other inconsequential piece of consumer noumena. In the competitive frontier of hyper-real estate, artists, theorists and [other] communications colonists hustle to stake out territories of ownership and authority over these practices of data-production. Nobody wants Facebook to share their profile information, but everybody wants to lay claim to the coinage or stewardship of the term postinternet: everybody wants to make the great humanitarian documentary artwork in trenchant critique of Big Data and the sheeple who feed her. The artist vassal who reaps the fruit of user-serfs' affective labor typically has a Facebook profile so impeccably impersonal as to look like LinkedIn—or else groomed to perfection, rehearsed in the press, and archived as performance.

In general, I remember Relational Aesthetics as problematic and uncool, with an embarrassing legacy of the neoliberal participation agenda most art institutions are now forced to observe in order to secure public funding (and it's worth noting that there's a similar participatory ideology behind the marketing and development of Macintosh, Microsoft, web 2.0, and most smartphone apps, not to mention many web-based artworks). It's precisely because of this and all its other failures that Relational Aesthetics starts to look like an important tool in thinking through the contemporary. The critique around various praxes collected under the rubric of that moment began to produce a certain set of ethics that made it difficult for artists to unthinkingly use the bodies of others to furnish their own artistic agenda (though it very much depends, unfortunately, on what kind of bodies, then as now). In those sectors of the art world that intersect with activism and social projects, there is much anxiety around the mis-interpellation of the data body by conglomerates; meanwhile, over in the storied realm of 'postinternet,' whole practices are built around the nonconsensual aggregation and reinterpretation of [other] users' content.

As a rule, I tend to be a user rather than a commentator (though here I am, whoopsie-daisie, with another lil' thinkpiece on Rhizome.org). I find the character limits and text boxes occasionally comforting in homeless, precarious times, and besides, if there's something to discover there in the data-mines of social media and outlying territories, I prefer to learn by doing as a point of principle and necessity. Facebook, writes Binoy Kampmark, is much like Jeremy Bentham's panopticon—an 'all-seeing', surveillance device pioneered in the nineteenth century for penal reform; he quotes Foucault's observation that the inmate "'is seen, but he does not see; he is the object of information, never a subject in communication.'" When 'user' becomes 'artist,' it isn't only about redeeming the time and energy spent producing content for the conglomerates, but also the will to subvert this objectification in unintended and transgressive ways. Weird Twitter, Facebook glitch and dark YouTube are prototypes for an unorthodox occupation of these platforms, and like the secret linguistic codes of Polari and Verlan (evolved to preserve an authentic subjectivity under conditions of hegemonic control), the beautiful evolving phonetics of netspeak are as yet unintelligible to the data-bots plowing through everybody's feed. ISE[2] has no external standard, but is constituted of a stream of word-memes worn-in by [written] use and catalogued assiduously in the appropriately named "urban dictionary"—since the internet is properly cosmopolitan in the way of all busy thoroughfares. To take this work out of the browser and into the gallery is not in its raw form an act of recuperation, but an act of deterritorialization—a violent reification.

As with any colloquial dialect (for "net art" is, like all art movements, a kind of visual language) the affect of url-based art and image production is entirely contingent on the context and its specifics: the audience, the network, the platform and its peculiarities. The gallery space has its own rarefied and incontrovertible lingua franca: a spatial-historical dialect that defines and shapes meaning even as it attempts—always somewhat huffily and fustily—to evolve around the technological and cultural developments that accompany each new generation of artists. The gesture of deterritorialization has been necessarily examined in recent postcolonial thinking, from which we learned that in order to preserve the affect or aliveness of works, objects, or signifiers torn from their native environment and placed in a gallery, there must first be a full acknowledgement of the historicity and wholeness of the original context. Until the object economy of the current contemporary releases its supreme hold on the discourses of display, there will only be token gestures and representations-of, and most of these works will become emptied-out and obsolete within a year or two, along with the technological narratives on which they are based.

But these are just teething problems in a toothy market. Teeth are a basic processing technology, imitated by the mechanical engineers of early industry and now obliquely referenced in the bits and bytes of unprocessed data. Voracious and machinistic, there's nothing the art world can't chew up; but the enduringly great "postinternet art" won't emerge in earnest until we stop believing in the myth of its futurity. The true subjectivity of present-future timespace lives out its rhizomatic manibodied philosophies in a mindless, uninformed, half-sentient cloud in that precarious suspended heaven that hangs like a loading error between far-flung labyrinths of data servers, while the whole of 'postinternet' stays in its filter bubble: creeping through the cracks in our Adobe suites, artfully sacrificing our expensive MacGodheads in HD on the pale altar of Tumblr– and tapping out thinkpieces like this one, over whose bones we'll squabble on Facebook. None of our shit is anything new; most of it isn't even that interesting. Our collective history dates back to the evolution of homo sapiens– as opposed to, say, 1990, when Tim Berners-Lee invented the World Wide Web– and the conditions of our present time[space] extend through the long moment of colonialism and capitalism, as well as back to shared ancestries and bodies whose worth, like our own, could be quantitatively accounted for. When we figure that out, we might be getting somewhere– if only through the understanding that we haven't come so very far at all. 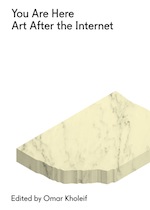 You Are Here: Art After the Internet is available for order from Cornerhouse Books.

[2] Internet Standard English (doesn't exist, but it does now).