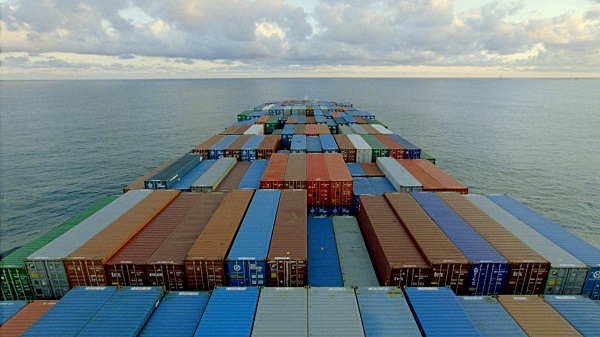 Allan Sekula and Noël Burch, still from The Forgotten Space (2010).

I woke up at the chime, looked at the mobile. New work available. I clocked in, made coffee, sat at the desk. Two hours of work right away, even before Twitter. Felt accomplished. I invoiced, and collected.

I met Sandra for breakfast. She's in Miami. She had the ceiling open to let in the sun. She got into a new task queue, editorial work. It's good work, she said, even though the pay isn't quite as good as advertising. What's the difference, I said, sipping my Bloody Mary. Different algorithmic authors, same algorithmic grammar problems.

We're in Brussels. I had put in for an unstack, thinking I'd get out and walk around this afternoon. I felt the slight bump as I was offloaded this morning, while I was still drifting in and out of sleep. I open the ceiling, see gray rain clouds above. A few fat droplets make distorted bubbles of light and color against the sky-looking lens. Maybe not. I query the schedule. Next stop is St. Petersburg, on Saturday. Weather report says sun. I'll have a walk along the Neva. It's been a few years.

Three hours of work. Probably three-fifths work, two-fifths Twitter, judging from my task conversion rate. There was another hurricane in LA. Images of houses and cargo containers tipped off their barges, floating upside down in Hollywood Bay. Thousands of them, some floating high, others with just single triangular corners showing above the muddy water. Green for homes, red for cargo. Like autumn leaves floating on a pond. Improperly ballasted carriers, people say. I invoiced, and collected.

Date with Heather tonight. Our circuits will take us both to Thamesbay at the same time in the fall. We've scheduled ourselves to be neighbors. I look at the edges of the door, behind the GIF screen I bought in Tunis last year. I imagine her, right through that door, every minute, for an entire week. Will we spend more time in her house or mine? She knows how to cook better than I do. But I like my bed. I imagine her in it. We're watching a film tonight, Solaris. I suggested it. She's never seen it. She likes noir, I like science-fiction. I think she'll be into it.

I think about paying for a circuit change. Transport across the Arctic Circle to South East Asia. A month in transit at most, and then tropical sun, newly built beaches with real sand, imported from Mongolia. My work's not good enough to afford that circuit. I'd need a queue upgrade, or even two. And then there's Heather. I could go after Thamesbay. Maybe just for awhile.

Three hours of work. I invoiced, and collected. Dinner—just my usual rice and beans. The beans are from Italy, large and white. Amazon special, via a passing container heading north to Scandinavia. They swell up plump in the hydrater, flavor the rice via an hour in the cooker. I went to Venice once. The new one, near Milan. I left the house and went to a restaurant a short walk from the barge port. I bought an antique digital wristwatch from a child running a flea market stand. The child was pale, wearing long sleeves with a veil. Living outside in a city, unable to afford UV block, she never exposed herself to the sun. The watch looked good against my dark wrist, black rubber on black skin. I don't wear it, but it's in the waterproof locker underneath the bed. I still remember how the rice tasted there.

The date was good. We got halfway through the film and then started fooling around. She pinged my toy, which I had quietly made aware to her, and we opened up a video feed. She asked me to show her my chest. For a long time, she just wanted me to show her my skin. My sternum, my nipples, the scar under my collarbone, my breast. She used her head camera, showed me her hand touching me on her screen. We synced toys and fucked. We stayed up talking for hours, after the film had played out, synced on our walls beside our beds. She talked mostly. I listened. She was in the Baghdad Shoals, I think. The lights were tuned brighter much later where she was. I didn't ask. I just wanted her to keep speaking to me.

After we hung up, I didn't feel like going to bed. I worked for an hour, invoiced and collected. I uploaded a video post. Browsed for new GIF art. Fell asleep watching a collection of classic Pokémon cartoons.

I woke up at the chime, and looked at the mobile. New work available. I didn't feel like it, and moved over to the couch. I checked Twitter. Fighting in the Ozarks, drone strikes against the Free New Orleans Navy off of Pine Bluffs on the Mississippi Sea. People were calling for sanctions, which probably wouldn't come.

I looked at the circuit routings, searching for some sort of deal. Four-month circuits between the Horn of Africa and Antarctica. I could afford it. But all that time on the ocean away from the coastal canals, and nothing interesting but fish farms and gambling on the seventh continent. There was the Appalachian Seaboard of the United States, getting cheaper by the day with the violence in the Midwest. Sandra liked that area. We could meet up, probably. Have a drink in person. Maybe be neighbors for a bit. We had always been close.

Then I found it. Two-month circuit, from Lima through the Nicaraguan Canal through the Colombian Archipelago and back. Last-minute deal, six-month commitment, at a rate just a little higher than what I was paying now. I did some quick math. I could do it, though it was a stretch. Maybe apply for a queue upgrade.

I signed the contract. Currently on pay-as-you-go, I could transfer immediately. I heard the far-off, muted sound of groaning steel, the increasingly close bumps as the cranes began shifting the stacks above me. I had, apparently, been reburied over the night as the barge loaded cargo. I opened the ceiling, and looked at the grey clouds above us. Still Brussels, I concluded. I heard the loudest shift yet, which must have been the unit above me being lifted away. The screen showed nothing but clouds, rolling slowly in the wind. I felt a slight tremor as my house was born up, excised from the barge stack to whatever ship would take me across the Atlantic to South America. The ceiling flipped to cool, white LCD standby until my house was plugged into the network of the next vessel.

Dimmed the ceiling, thought about making coffee. I thought about what I was going to tell Heather about Thamesbay. But she knew me. She knew what life was like. She would understand.

Dystopia Everyday is a short fiction series that takes the form of user stories set in the near future. Previous works include Martine Syms' "Her Quantified Self" and Nicholas O'Brien's "Forgetting the Internet."