Trailblazers 7: Notes from the Game-Master
By Dragan Espenschied 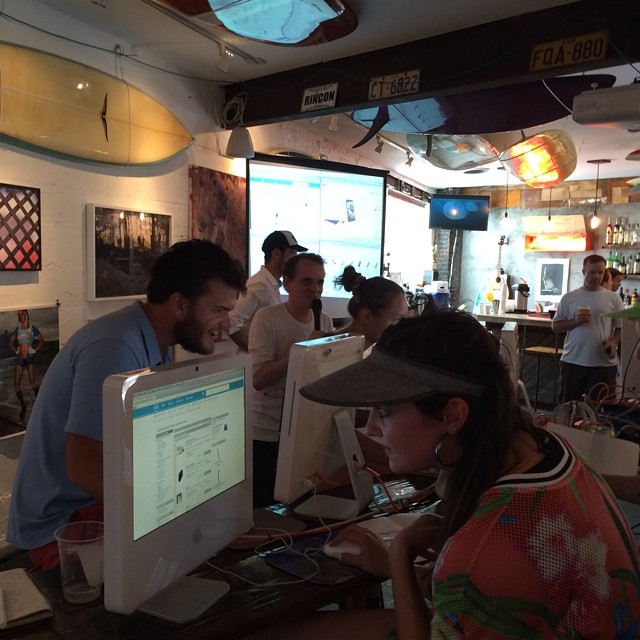 At Trailblazers 7, surfing was all about different ways that indexes and taxonomies are created and used, and about excellent airhorn-puncutated stadium pop provided by DJ Smart & Outgoing.

The competition took place yesterday at the Rockaway Beach Surf Club; given the use of a one-button mouse, no keyboard, and no back button, qualifying surfers in the competition were asked to navigate a "trail" from one website to another, only by clicking. Without the use of search engines, browsing the web requires careful thinking about how websites are organized and interconnected. Often, successful trail blazing involved navigating to some link-rich environment. Whether surfers found this in editorial content (like M. Hipley's heavy usage of the New York Times website) or in the rather unsorted universe of user contributions (like Nick DeMarco always heading straight to forums and comments), finding these "indexes" and understanding the ordering of material there was crucial for success.

Every surfer sooner or later ended up on Twitter, the omnipresent social network that gives away lots of data without requiring signup. However, the public streams presented there proved not very useful for finding a link, since what single users or corporate accounts post as links over time is rather eclectic. One might remember that this or that Twitter account had some interesting link posted, but when exactly, and how to go to that point in time, when the navigational unit of measurement is not even time but single tweets?

Even websites that are seemingly ordered by topics or themes—like the typical blog format with categories, departmentalized newspapers as the NYT, or user-stewarded spaces such as the SEGA fan forums—are, with their growing amounts of content, dominated by an order of time. There is just too much material to be sorted into meaningful, non-automatic systems of order. And time is very difficult for humans to navigate in, even in calendar-based systems, clearly expressed by such fuzzy date-naming schemes as "last month" or "one year ago." In most cases, surfers would click the link to "previous page," hoping that what they remembered being in there somewhere would show up. (This turned tragic when Hipley suddenly found she would need to pay for the continued privilege of digging into the NYT archives!)

Trailblazers NY champion Joe Pugs demonstrated that a primitive yet predictable automatic ordering system would be laborious to handle, but would always lead to success. He went to Twitter every single time, but instead of heading for individual streams, headed for the list of all Twitter users, ordered alphabetically. He could count on every single entity on earth having at least one Twitter account and that they would link to their home pages from their profiles. For instance, to go to the Bad Sonic Fan Art tumblr, he had to page through quite a few "Bad [Something]" accounts, but always knew he was on the right track.

What we learn from this is that Twitter's key for being the almanac of the digital world is allowing not only persons but actually any *concept* to have an account. The only precondition for this to work is that this concept can be expressed as a series of statements, or counter-statements. This is kind of like Wikipedia, just without zealous admins going on relevance criteria deletion rampages.

Other memorable moments include:

I. http://www.callahead.com to http://friezenewyork.com (decided in 'rush' by the challenge of finding an 'image of a globe')

Post your solutions in the comments. (Heather Corcoran claims to be able to complete Trail V in 5 clicks).

Actually it was 6 clicks…