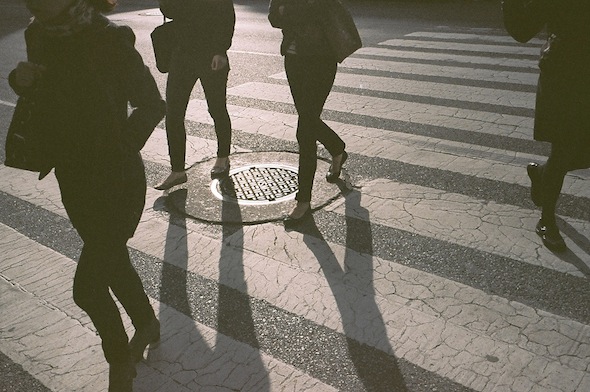 On the morning of January 8th, Teju Cole published a fiction in the form of 33 tweets, each posted from the account of a different "collaborator," and then retweeted sequentially by Cole. Titled "Hafiz," it took three hours and fifteen minutes to be published. Like most of Cole's experiments in Twitter publishing, it generated much more social media heat than actual critique. (There are a few notable exceptions.) But "Hafiz," both as a story and presentation, is worth examining, as it is both the closest @tejucole has come to Teju Cole's fiction and a singular commentary on it.

This is not Cole's first foray into Twitter publishing. "Small Fates" (2011-2013), which took the style of Felix Feneon's faits divers, comprised a mammoth and often wearying series of news stories compressed into Tweet-length narratives of violence and disaster. It stood in direct contrast with the slow perambulations and musings of his 2007 novel Every Day Is For The Thief, though both take place primarily in Lagos. His Seven Short Stories About Drones (2013) was a series of similar compressions, ending famous first novels (Mrs. Dalloway, Things Fall Apart) by incorporating drone strikes in their first lines. It was a direct attack on the then-obsession with Obama as reader, and it had the half-life that all political provocations share. If "Small Fates" was the perfect marriage of an antiquated form and contemporary social media, Seven Short Stories About Drones was an addition to an already thriving genre of net-detournement. Cole told the New York Times recently, "…the writers I find most interesting find ways to escape [the novel]," and his ongoing project @_kill_list, which recounts each kill in The Bible, reflects that continuing restlessness in his own output.

"Hafiz" is far less immediately readable than any of these projects; this, perversely, is its greatest strength. Cole has moved beyond his previous formal horizon of a single story per tweet, bringing Twitter's networks into play. If you were one of @tejucole's followers, the experience of watching him string together the RTs was highly disconcerting, so much so that I immediately (and incorrectly) guessed that he was composing a story from found tweets, rather than disseminating his own writing via his followers. (The critic David Vecsey, who did not follow Cole at the time, had the inverse experience: he was captivated by an out of context tweet on another account, and only later realized that it was a part of a collaboratively published story.) The collaborative structure of the project, and the lack of any central voice, fractured the narrative and dispersed its fragments across a riot of feeds. After the nature of Cole's project became clear, however, the clamoring identities distributing "Hafiz" eventually cohere into a single voice, one of semi-deliberate haziness attempting to articulate complex ideas in relatively simple language, a voice similar to that deployed in Cole's two novels.

At the same time, the use of the RT in "Hafiz" can be read as a paratextual comment on Cole's own fiction. In his 2011 novel Open City, the narrator, Julius, encounters a strange subcategory of strangers, from an old man in a movie theater "his head thrown back and his mouth open, so that he looked more dead than sleeping" to his grieving neighbor Seth, to a sole marathon runner he reproaches himself for pitying. Julius invents narratives for each partially in an attempt to deal with his intense empathetic reactions but more, perhaps, to work through the parental absence in his life. Using the analogy of the Freudian view of mourning as the incorporation of the dead into the living, Cole shows how Julius takes strangers inward less to understand them than to use them to consider his own existence and obsessions.

Such a stranger interrupts the commute of the narrator of "Hafiz": a seated man, clutching at his heart, pedestrians looking on. A heart attack is assumed; the paramedics eventually arrive. As in Open City, the narrator appropriates these events as fodder for his own ruminations. He believes the seated man is crying, "Because light is beautiful. Because we do not wish to leave something and stray into nothing" (relayed by @robdelaney, of all people). He quotes Logue's All Day Permanent Red, imposing a high literary aesthetic on a scene which, he admits upon the paramedics' arrival, is just another day for them: "In each unwasted gesture was the message: it's always someone's turn, always someone's bad day" (via @rachelrosenfelt).

As the thirty-three different collaborators' distinct and clanking agendas are stilled to utter a single, unitary voice, so too are the characters in "Hafiz" muted to allow the narrator to meditate. Still, he is distracted not only by the others but also "by my own presence" and thus unable to concentrate. The narrator appears to be the only bystander with any agency. It is he who calls 911 and summons the paramedics; it is he who bends down to feel the seated man's pulse. But it is ultimately another's presence, the young man with the phone, who punctures the narrative with his statement that the  suffering man is a local drunk ("I know him," the young man said. "I've seen him around. Drinks a lot." via @patricknathan), allows another character's interpretation of the events to impinge, almost turning the entire story into a joke.

Was the decision to relay "Hafiz" through the appropriation of other Twitter profiles (via the RT) a deliberate comment on the self-entrapment of his narrators? Or was the marriage of story and form merely the product of Teju Cole's refined and narrow authorial concerns and @tejucole's open, welcoming, and broad Twitter-style? Cole has neglected to directly address this, rather speaking to Vecsey of his fascination with the "clean"ness of a RT as "an occasion for grace... to create a 'we' out of a story I might simply have published in the conventional way." Regardless of authorial intent, "Hafiz" uses the RT to comment on solipsism and empathy in Cole's own fiction and, perhaps, on Twitter itself.