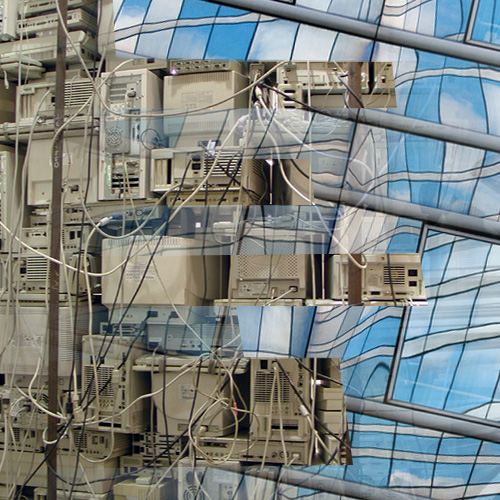 If you thought cryptocurrencies were hard to understand, you probably want to sit down for your first introduction to smart property.

The easy way to think about smart property is like Bitcoin, but for real things. I recently explained BTC here on Rhizome as follows (skip this excerpt if you're already familiar with this):

Basically, it's a peer-to-peer database that lists a number of units of value, or coins, by unique addresses, and assigns them to personal owners by more unique addresses. The database makes sure that only the right coins are assigned to the right owners by keeping a single list of who owns what, called the blockchain.

It also makes sure that the blockchain cannot be falsified, by placing the transactions between pieces of a complicated code, which are called the proof of work. Since every computer on the network is simultaneously generating the proof of work (and is rewarded for doing so by being given a fraction of new BTC according to the amount of work they are doing, in what is called mining), it would take a computer that is more powerful than all the others combined to mess  up the record.

Rather than recording ownership of non-physical cryptographic made-up money-units using a distributed, peer-to-peer database, the smart property database (the blockchain) is tracking contracts that determine access to things like cars, real estate, or stocks. Your car's title is not just a pink sheet, it's also an entry in the blockchain—in other wrods, a cryptocoin. (The idea was first proposed by Nick Szabo, who worked on a precursor to Bitcoin called "bit gold.")

There isn't functional smart property yet, but people are working on it. Ethereum is a platform that works like a cryptocurrency, but with actionable script inside the blockchain. This code could be programmed to work in many different ways. It could simply be used as a kind of cryptocurrency, or a contract, or a bet between two parties, in which ownership of a property changes hands automatically based on the results of, say, the NCAA tournament. Or, it could get much more complicated than that. Ethereum's white paper suggests the possibility of anonymous, distributed corporations, making decisions and paying salaries based on who controls a majority of the shares. But even Ethereum's developers aren't quite sure how it will work—they are planning a sandbox test chain first, so that they can see how it works in practice and prevent weird code bugs from escaping into the wild. In the world of smart property, stakes are accelerated as theory becomes real life.

Woe betide you if you lose the digital wallet that has the title to your car, your home, and your perfect digital fantasy sports team. But what is really unfortunate about smart property is not just what might go wrong, but our inability to understand it at all, right or wrong. Although transparency is often cited as one of the more salutary features of decentralized cryptocurrency, the automation of contracts opens up the possibility for new levels of automated, algorithmic manipulation of real property.

When the bank comes to foreclose on your house, at least it is fairly easy for the layperson to understand what is happening. You didn't have the money to buy the house, the bank gave you a loan with interest, you didn't pay them back, so the bank gets the house. Perhaps it's predatory and capitalistic, but at least we can see how.

The only way that most people even pretend to understand Bitcoin is with analogy—"mining," "keys," and "wallets." But what actually makes it work is math that almost no one understands. This is why no one uses public-key cryptography if it isn't automatic—it just doesn't make sense to ordinary people, no matter how many stories of Alice and Bob you hear. We detest legalese and fine print, because this is where someone can take advantage of us. In the case of cryptocurrencies, there is only fine print. When you find out that someone in Romania now owns your car, and it has something to do with the a vulnerability in the Merkle branch that allowed the dealer's transaction to double-spend, what then? If you couldn't understand in the first place, how could you not mess up?

We might chuckle at those who lost money in the Mt. Gox fiasco, because we think they were suckers that should never have invested in Bitcoin to begin with. But Bitcoin is a choice, forced upon no one. Property is different. Even to reject private property, one must have the authority to declare something common property. Under US law, common property and private property are two types of the same thing, and if that property is smart property, they will both be dependent upon cryptography. A Creative Commons license would be as dependent upon public and private keys as the preferred stock of an asteroid mining start-up, ensnared by the same fine print.

Currency is an invented unit of value. Property, on the other hand, is the world, being valued. Smart property, if it becomes a success, could put the entire authority by which the world is valued beyond our understanding, including the ground beneath our feet, the water that we drink, the air that we breathe.