Ann Hirsch stood fully nude at the head of the gallery, solidly on both feet. "I guess a lot of people are 'over' nudity in performance art," she said.  "Like it's been done before... so we should stop doing it or something."

"I'm able to do this…" she continued. "Because we're all girls, er, women here. So there can be no misconception that I'm like doing this for attention or something. When there are men in the room, that is what we all think."

It wasn't that I had forgotten that this event at Transfer Gallery in Brooklyn was for women—open only to those who identify on a feminine spectrum—but in that moment it was tangible, the room held a weight. 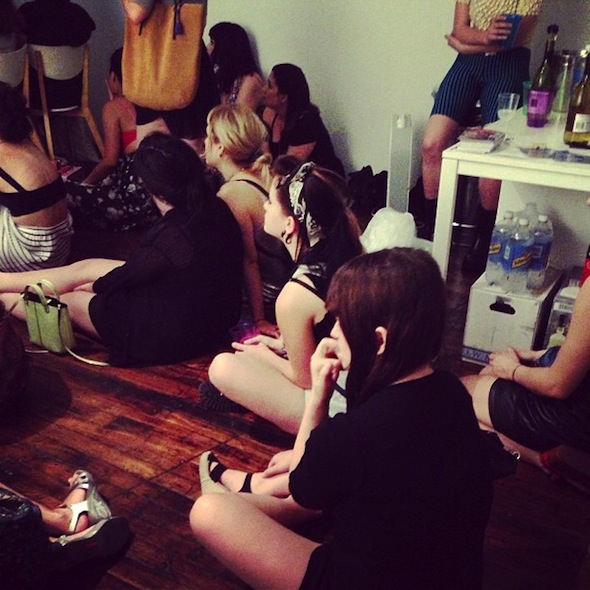 The audience at gURLs. Photo by Marina Galperina.

Ann continued the monologue, as she began to get dressed at the end of the performance: "I'm always hungry for female intimacy. The kind that is platonic but bordering on sexual is my favorite."

Afterward the room was a wall of applause and I realized I had been waiting for ironic "wolf whistles," but there were none. There was little irony at all.

gURLs, a night of performances and readings at Transfer Gallery, took place on August 30th, and was curated by Zoë Salditch. It was, as previously noted, a female spectrum-only event, and, shifting through the audience, I swear I heard someone say that this night had captured something "in the air." I performed at gURLs and assisted Zoë with curating, so I am biased, but honestly this is what i had been thinking too: that here is a space for women who are creating work expressly, or especially, for other women. It is something that is happening, or maybe has always happened, and I want to be a part of it.

Zoë's original conception for the night was a slumber party for Weird Twitter; a Weird girl Twitter slumber party. Which immediately made me think of a specific Twitter trend: this wave of tweets about girl culture that are funny, self-aware, experimental, and often teenage-nostalgic. I am thinking of poet Melissa Broder tweeting things like "walk in the club, lay on the floor," and "fuck me like the government." Or the account @knifesex: "missed connection - you: real worked up over some issue you're never going to do anything about anyway. me: lost in a corn maze forever." (Weird Girl Twitter closely related to the teenage-populated Sad Girl twitterers. Example: @sosadtoday: "sext: have sex with me" and @moonhumor: "i want to die.")

What gURLs blossomed into was a night of pieces that fell somewhere in between performance art and readings, but the tone of "slumber party" remained, as the event was by invite only. This made it a happening among a small set of women who publish work online and are interconnected through the New York City art and lit scenes, with Weird Girl Twitter vibes. I want to talk a little about each piece, and the performers: Ann Hirsch, Bunny Rogers, Angela Washko, Martine Syms, Kate Durbin, Jenny Zhang, Gabby Bess, and Genevieve Belleveau, and myself, Rachel Rabbit White. 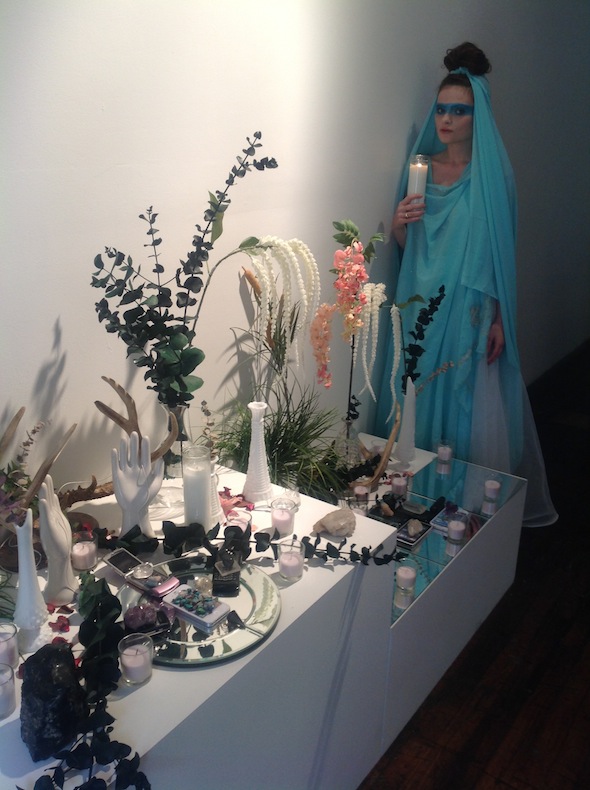 Rachel Rabbit White at gURLs. Styling by by Danielle Meder.

As people arrived at the gallery, they were invited to "let go" of some negative aspect of their online self, putting it in writing near a shrine-like sculpture of fake flowers, cell phones, and crystals. This was my piece: I wanted to consecrate the "safe space" of gURLs in a sort of cleansing ritual, and (in character, in costume) I sat with each person and burned what they wrote. There was also a video component, and a tub of water where all of the ashes (and my body) later went.

I thought the idea of "cleansing" our online selves was funny, but I took my role here totally seriously. The concept was adapted from a ritual I do IRL in private (at each new moon) and it was something that don't think I could have done—or would have come up with—for an audience that included men. Realizing this, I think of that Marie Calloway story where she talks about wanting to write just for a women, wanting to write a story so directed at women that only women could read it.

Martine Syms' piece is what I want to talk about next. It was a letter addressed to Sheryl Sandberg (of Lean In fame.) Standing in front of a camera, Martine described being at a party, trapped in a kitchen conversation with a man who wanted to give her advice. "After 24 the party is over,'" the man said. "All of your success is already expected." 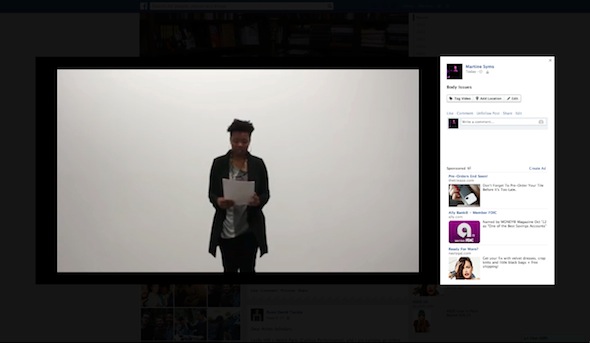 Like every American, I grew up middle-class… I'm also black. I bring this up as a purely economic dimension. On average, the wealthiest blacks live in neighborhoods that are worse than the neighborhoods of the poorest whites.

America has a brutal tradition of punishing black ambition. I don't care, Sheryl. I'm ready to sit at the table. I just want to know what it's all for. Is it worth it to you?

Bunny Rogers' piece was also a letter of sorts. She entered the gallery in a black Amish-style dress with an apron and sang Andrew Lloyd Weber's "Memories" from the musical Cats in Russian, память in Russian, a beautiful and eerie dedication to her Grandfather who recently died.

Jenny Zhang's piece was all I wanted to talk about afterward, bumming American Spirits from the girls outside and gesticulating loudly with my plastic wine glass. 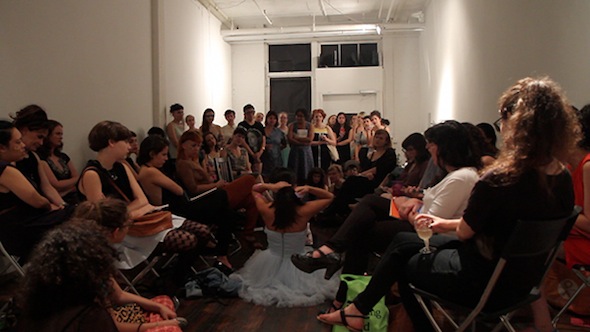 Jenny walked to the center of the gallery in baby blue tulle prom dress and unloaded a massive suitcase, holding her book collection. She proceeded to pass out the books from female authors like Chris Kraus, Ariana Reines, Lidia Yuknavitch, and Lydia Davis, encouraging people to borrow them.

She then sat in front of a small pink plastic mirror, and began applying make-up and holographic butterfly stickers (which she also passed out to the crowd ) while reading a poem. It started, "I would have no pubes if I were truly in love/ This I know/This I am sure of." It was powerful in its raw breeziness.

This was one of my favorite parts:

every once in a while

and she's all like, say sorry without the say

and I'm all like, say sorry without the say!

I bet if she could

she'd stuff me right back up her lil cunt

and we would fulfill each other

in ways we cannot dream of now.

The intermission, at a show like this, is almost as important as the event itself. Here, the women mingle outside of the gallery, complimenting each other on outfits (and there were so many great looks: turquoise hair, metallic boots.) I kept hearing women exclaim that it was so good to finally meet each other.

"I've been following you forever, it feels like," said the girl who edits Rookie magazine to Gabby Bess, a performer.

"I know, it's so good to finally meet you IRL," Gabby exclaimed.

"I'm upset my friend went to the 'sad boys' reading instead," someone said.,

"Yeah it's like some alt-lit reading tonight. The things to go to tonight are either gURLs or this 'sad boys' reading." (Alt-Lit, quickly, is a form of internet-based poetry and prose. It is often published on Twitter or Tumblr where it feels ephemeral, quickly lost in the stream, giving the work an off-the-cuff vibe.)

I had also been thinking all night that what was happening here seemed almost like a response to alt-lit, which is dude heavy. But now to say it aloud would be too obvious.

I had missed Angela Waskko's piece, because I was "backstage,"  but I heard the audience laughing through the door. She skyped in wearing workout shorts and a push-up bra, and began discussing how she is an advocate for Millionaire Matchmaker's Patty Stanger. She then started doing a workout tape while listing the 100 most requested characteristics the millionaires ask for in a mate. It ranged from "has career goals," to "ages 21-28," to "big boobs."

Kate Durbin and Gabby Bess both did video pieces for the show, which are available online.

In hers, Kate reads from the Tumblrs of teenage girls, while costumed in the Tumblr Girl aesthetic in her bathroom. Gabby spoke about the compulsion to photograph and record herself with a touching intimacy and poignance.

Genevieve Belleveau had the closing piece. In it, a performer (Mikey Coyte, who is male identified) performed a lip sync to a haunting meditative chant Genevieve had recorded in freestyle. He wore a long red wig belonging to Genevieve, red lipstick, and underwear. 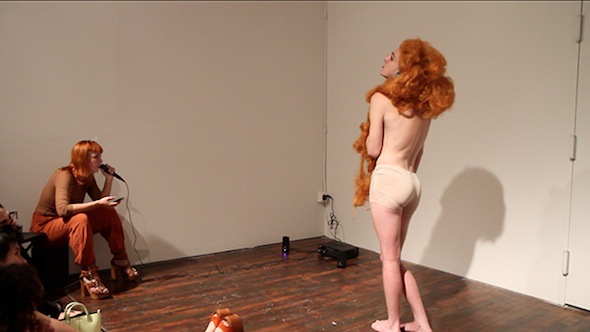 It was also at this moment that a few men showed up at the door, standing awkwardly for a few minutes, then leaving.

There was some worry about making the event female-exclusive. And Genevieve told me later she was initially turned off by the idea. "It struck me as a binary gender codified way of addressing this oppression of the female voice. Part of having a male-bodied performer stand as my avatar was a response. I felt the question needed to be raised; what do we mean by female?"

We talk about how Ann Hirsch's performance brilliantly questioned this, asking what would the naked female form mean if there were men in the room?

After the show, everyone poured into an outdoor back area, to finish the wine. At some point a man pulled up on his bike, saying he saw a "buncha chicks dancing." Talking to Genevieve, he started grabbing her belt loops. "Woah, woah," she said, stumbling to pull herself back.

"It contrasted so sharply with the warmth and safety of the prior three hours," she told me later… "It occurred to me, this sacred space is really necessary."

I keep trying to circle back to what it is gURLs had captured about right now. It seems to me that feminist art of the past has often been about feminism, about social justice, has been inherently political.  There exists this idea that an artist should strive to be universal (it's even part of Marina Abramovic's artist manifesto, which has so many likes and re-blogs on Tumblr) but what gURLs was about to me, truly, was working with the urge to create work that connects with other women, rather than against it, without reverting to assumptions of a universal definition of women or women's experience.

Adrienne Rich wrote that no male writer has written largely to a female audience but that every female writer has written to men. But arriving at a moment when this balance begins to change is an extraordinary one for the female writer and reader. Artist and viewer. But the "connection" part of this also seems especially important to women who are creating work online. Since I was a teenager, the internet has been a space where I find women who share my interests in feminism, in art, music, writing. (And it is interesting that we have so much more access to feminist theory, yet the IRL spaces feminists formed seem long gone.) Yet increasingly, being online (putting your work online) means being on social media sites, relying on likes and re-blogs, which are engineered to be addicting. Right now I am scrolling through Tumblr, Twitter, and Facebook looking for people or things to connect with (which is what I do whenever I am lonely, even though it only leaves me feeling more empty) and this is where it sinks in: that gURLs satiated a need for something real IRL.