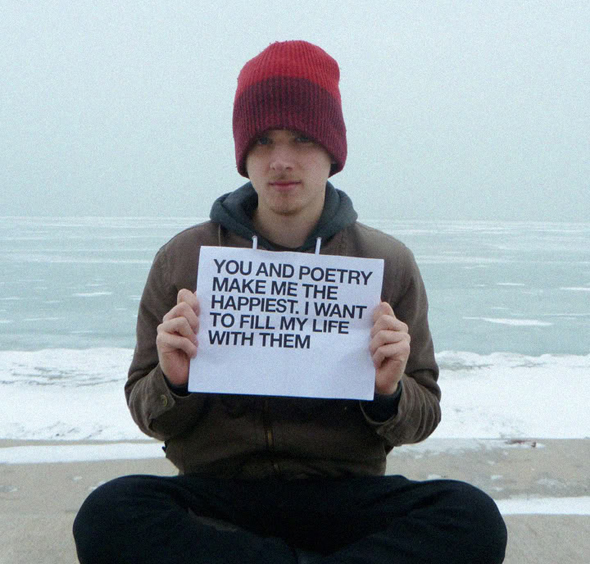 LD: You recently posted AN INTERNET BARD AT LAST!!! (ARS POETICA) on YouTube about your vision of poetry on the internet. You talk about the importance of poets harnessing social media as a powerful way to change the life of someone else, anywhere in the world. Why is it so important for you to share this message at this time?

SR: the importance of sharing this message now is that our whole society is currently struggling to determine the role of these social platforms. corporations are trying to learn how to make money from them, families are trying to learn how to stay connected through them, everyone is asking "what value can there be in a 6-second video?" and it's all moving so fast, Vine blew up to 40 million users in its first 7 months. but the poetry world has largely been ignoring social media, mainly just using twitter and facebook to post links to standard, plain-text poems. my message is this: if our job is to move people with our language, these platforms give us endless and powerful new ways to do that. the tools to make our language visual and auditory have been democratized; the ability to maintain actual relationships with hundreds of our closest readers across the world is now a reality. i have no publisher, i've only been working at this for ~3 years, and my poems reach thousands of people each. i think social media represents the biggest set of new opportunities for poetry since the printing press.

LD: The democratization of communication and language is apparent in the content of your work too—if someone came across your YouTube channel they could think you are a motivational speaker or maybe a Belieber. You could kind of be both those things, but you seem removed from being either. As a poet, would you differentiate yourself from the Belieber subculture (for example) and how they utilize social media to communicate? I guess I'm asking if you feel more connected to links to plain-text poems or to hashtags written by Beliebers? Additionally—are pop culture and humor also democratic tools to share poetry with a wider audience?

SR: in terms of the style of writing, like the sense of humor and the care put into imagery, i stil relate more to old-school poets: i stil passionately work to keep my sentences interesting and new. in terms of social media usage, i relate more to the beliebers. much of the poetry world has a knee-jerk reaction against anything that can be considered "self-promotion" or "marketing," and that's a huge limitation on community building. beliebers don't have that reaction, so they jump right into the pursuit of cross-connection and network building, the whole #teamfollowback thing, shouting each other out, etc. the strength of the belieber community on twitter is unreal. for a while Lady Gaga had more "followers," but if you looked at the number of RTs and faves, her community was never nearly as engaged as Justin's

also yeah i think humor is a tool to share poetry with a wider audience, although there's already been a long history of funny poetry if you know where to look. my early favorites were e.e. cummings and charles bukowski, and they both have a lot of funny poems. the flarf movement is probably the funniest thing that's happened to poetry; sharon mesmer and k. silem mohammad, for example, are very funny flarf poets i'd recommend.

LD: Ok, so using terms from the marketing world—was Vlogtober[1] a successful content-driven campaign for you?

SR: overall vlogtober didn't work well for me. it was too much. i was touring and constantly working on the next video--i didn't have enough freedom to follow my excitement on new ideas or stay connected with my comunity on a personal level. i'd like to do shorter bursts of extreme focus like that, but a whole month was too much. in terms of whether it worked for marketing.. i dont think it was a big success--none of the videos from that month have gotten over 10,000 views. i was too focused on quantity, maybe the quality kinda dipped? on the positive side, i was able to add a lot of variety and depth that i sometimes miss when i'm just creating a couple videos per month.

LD: You seem to be implying that you equate view counts or retweets as a measure of success for a piece of work. Do you consider your work "successful" only via internet metrics or do you think about the importance of your poetry on other terms?

SR: "success" to me is making peoples lives better. i do care about quantity as part of that, i want to reach a lot of people. but the quality of the impression is also important. and there's a lot to consider in "quality" of impression. does the piece simply make a person smirk once, or is it really going to shake them, make them reconsider their life choices, or really shape their identity? numbers can be misleading; some sites are optimized to get clicks and even shares, but their content is kind of just filler, it doesn't have much effect on you. the most accurate measure of success i have is the folder of screenshots i keep where people have told me, "your outlook has changed my life," "your work has meant so much to me," etc.. in those cases i know my work has mattered because people felt strong enough to tell me directly !

LD: Did touring for an extended period allow you to decide on future plans and what you want your focus to be? Was it during this period that the idea for Boost House[2] came into being?

SR: yes! i noticed from all those different settings on tour, i really like doing my work in party-like environments, places that are busy with activity and many friends at once. if i'm doing work alone in a quiet space, i sometimes get lonely. i like to have my social life interwoven into my work experience, and vice-versa, so i'm never lacking either. in mid-2012 i came up with the idea of starting some kind of vegan co-op house with my writing friends, and gradually the other details of boost house came after that :)

LD: Are you worried Google will monetize or sell your videos while you end up with no intellectual rights?

SR: it's frustrating that youtube can identify when i use copyrighted music, and they put adverts before those videos, to give money to the record labels, etc. i've been trying to warp the music i'm using now, sometimes reversing it or slowing it down, so i can keep them ad-free. ultimately the only people who "own" the work is the viewers tho.. once it has reached them, and they've seen it, it's moved them, impacted their day or even their personality.. that's the artwork i think. the video is not the actual artwork for me. something like that. the impact the videos have had on people already is real and significant, regardless of wat happens to the actual videos now, they could all get deleted, and their impact is still seeping pretty far into the world :)

in 2010 i became very interested in some websites like Hipster Runoff and Pictures For Sad Children. i loved how their internet format allowed them to reach so many people, even though their style of humor was very similar to what i loved in flarf poetry. around the same time, i had some teachers in my MFA program who were very dismissive about my internet- and flarf-influenced poetry, which drove me to do it even harder. i really came to identify as an "internet poet" in response to how easily my teachers dismissed it; i wanted to assert in response that it is valuable, perhaps more valuable than print work, because it's able to become so regularly integrated into my readers' lives.

i went to Central Michigan University for undergrad in creative writing, then i started a poetry MFA program at Columbia College Chicago, but i dropped out half way through.

currently i make money from selling books and shirts, and doing readings at universities. in the past i've made money as a writing tutor, i've driven tractors and trucks on a farm, and i've cleaned tables at a college dining hall.

my desktop is messy, i never look at it; i just search to find files.. i don't have a consistent physical workplace, i just use my laptop and phone in a chair in a library, or in someone's apartment :)

[1] In October 2012, Roggenbuck and Daniel Alexander (SNCKPCK) collaborated to post a YouTube video every day throughout the entire month. Vlogtober is a grassroots event where any user on YouTube or Vimeo can take part by posting a vlog every day in October.

[2] Formative plans for Boost House are that it will be a publishing house and a residency space: boosthouse.livemylief.com