Ed. — Occupy.here was supported by Rhizome as part of its 2012 Commissions program, and also received a commission from Triple Canopy in 2013. The project's new website launched yesterday. 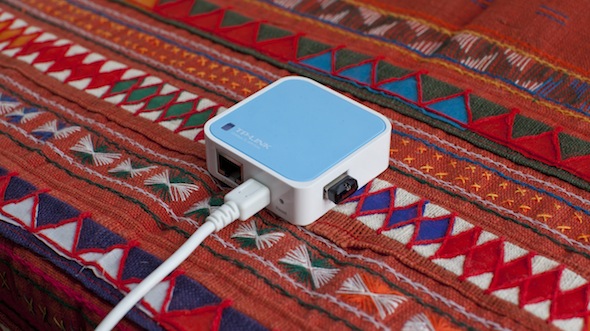 Regardless of your feelings about Occupy Wall Street, we can all agree that its genesis was unlikely, to say the least. It appeared, seemingly out of nowhere, in New York's Financial District (of all places). And it continued to exist only because of a lucky break: basing the protests in Zuccotti Park, formerly Liberty Plaza Park, was a fallback plan, following a failed attempt to protest in front of the New York Stock Exchange. It was the unusual rules for Zuccotti—as a Privately Owned Public Space (POPS), it is not bound by the normal city parks curfew, and is required by charter to stay open 24 hours a day—that enabled the encampments to get a foothold. This may have been a lucky break, but one that was earned through years of organizing, cultivating the expertise and tools and networks that allow a movement to grow and sustain itself.

Occupy.here began two years ago as an experiment for the encampment at Zuccotti Park. It was a wifi router hacked to run OpenWrt Linux (an operating system mostly used for computer networking) and a small "captive portal" website. When users joined the wifi network and attempted to load any URL, they were redirected to http://occupy.here. The web software offered up a simple BBS-style message board providing its users with a space to share messages and files.

Unlike most wifi connections, this one wouldn't let you check your Facebook. It was designed to run entirely disconnected from the internet. Only people physically close enough to the router can could reach the local web forum with their mobile phone or laptop. I imagined it becoming a kind of intranet for Occupiers, filtering users by proximity to specifically support the people at the park.

During the Occupation, I was getting up extra early to visit the park on weekdays before work. I'd chat with whoever was awake and hear what was going on with the upcoming General Assembly, or who'd been making a ruckus the night before. When I described my strange wifi project, I was surprised at the encouraging reactions I got. "That's awesome, you should do it!" or "we were talking about building something like that—does it handle video?"

So I showed up one morning and left my first prototype with the volunteers at the Info desk. Just keeping the router powered consistently was a big challenge; I'd plug it into whichever diesel generator I could find running in the park. After the park was cleared, I refocused my thinking about how best to support a decentralized movement. Since then Occupy.here has become my zen garden, a tiny self-contained internet I've been developing slowly and methodically.

This past Spring, I began stashing wifi routers wherever I could find an electrical plug near a freely accessible space. For a few months, a friend hosted an Occupy.here router from his studio at the Lower Manhattan Cultural Council residency in the One Liberty Plaza building. His 12th floor window looked down right onto Zuccotti Park, close enough to get two out of three bars of wifi coverage in the park.

In this second, decentralized phase, I've seen a modest volume of use by internet standards, perhaps a handful of posts per week. There are patterns in how it gets used according to where the router is situated. The Zuccotti Park router was a popular venue for middle-aged men to upload selfies. Another one, hidden in the lobby of the Museum of Modern Art (installed without permission), mostly receives multi-lingual variations on "hello world" or "why doesn't the wifi work?" A handful of users have written more substantially, but it amounts to a message in a bottle, floating in the 2.4 Ghz spectrum.

It's been exciting to see Occupy.here used "in the wild," but it also has some shortcomings—its lack of visibility makes discovering the network difficult, and the slim likelihood that a user will return makes conversations difficult to achieve. As a growing digital library, the project can surely offer an alternative to "junk food media," but building a slow web movement is not enough. I'd like for the project to be fun to use, but ultimately I'm interested in fostering conditions that might credibly challenge the status quo.

I need to destroy the zen garden and replace it with something more like a town square. Less tidy, more communal. I would like to create something you would want to use every day to share with people whose opinions matter to you. I'm interested in finding collaborators who have a stake in its development. It's becoming clear that, collectively, we all need online spaces that aren't undermined by the surveillance state.

Whether or not the big tent incarnation of Occupy has a future, the 99% are just as dissatisfied as we were in 2011. Much like Napster gave us a taste of what a digital commons could be, Occupy showed us how massively distributed activism can materialize seemingly overnight. It's time to put in the hard work organizing for the next Occupy, to create the right conditions for a lucky break.

On Sunday October 6th I'll be participating in the PRISM Breakup event at Eyebeam. I'll be conducting a hands-on workshop as 12:30pm, followed by a talk later in the afternoon. Please come with radical ideas, and bring a laptop!

Hi Dan, nice to meet you.
I'd Like to share with you some links with similar projects.

I'm trying to bring a similar service on my Home town.

Currently I'm using http://project-byzantium.org/ which is a linux Distro with a free mesh network pre-configured.

After that, In Argentina there are a few free networks running over openWRT. They are http://buenosaireslibre.org/ and http://www.lugro-mesh.org.ar/ . The first one implement a client-server model and the second one a mesh network.

I hope this will be helpful for you, and I wish we could keep in touch to share experiences.

Hey, thanks for the links! I'm only a little bit familiar with Project Byzantium, and with mesh networking in general. I am curious about whether people use mesh networks differently from the regular internet. Or is it just a way to inexpensively connect people who use it similarly to how they'd normally use the internet?

The approach I've been taking with Occupy.here is to rely on plain 2.4 Ghz wifi and build data federation into the application layer instead of the network protocol. Mainly this is to avoid, for example, asking that somebody install a specific distribution of Linux or to recompile their phone's kernel, which is asking a lot of a participant. Surely this kind of setup is well worth it in many situations, but the model I'm working with is more about meeting people where they are, technologically. Hopefully this can build up a larger base of users from the beginning.

Until recently the data sharing has been limited to something I built in JavaScript called Many Copies. When a user connects to a Occupy.here message board, their web browser makes a copy of all the content. Then when they visit another message board, their browser copies all that content onto the second one. It's kind of a wireless sneakernet, entirely powered by people physically walking between locations.

I've also been thinking recently about a new way to hook up two remote Occupy.here routers, relying on virtual tunnels over the internet. I'm still working out the details of it, but the main goals are that it be secure (using GnuPG for encryption), that it minimizes observable metadata, and is very easy to set up and operate.