ATHENS, BABY: A Conversation with Poka Yio
By Stephanie Bailey 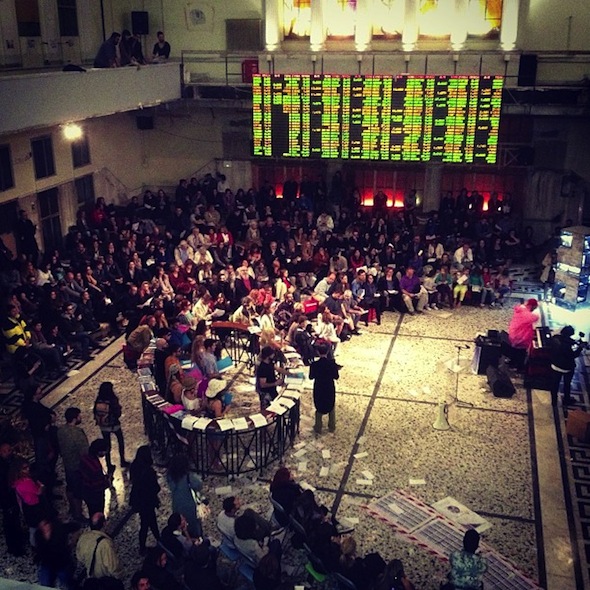 The Beggar's Opera at the 4th Athens Biennale, AGORA . Source.

If you thought the Greek economic crisis had faded into irrelevancy, think again. Greece may not dominate headlines as it once did, but here, issues of value, capital and labor are fermenting, combusting, imploding, and reforming in ways that have international significance. The 4th Athens Biennale (AB4) has broached this reality head-on by installing a biennale in the old Athens Stock Exchange building that closed in 2007, and by taking as its title the word AGORA, which has come to mean "marketplace" in modern Greek, but which, in ancient times, referred to a gathering space that had overlapping social, commercial, and political uses. In order to create a space of true and viable exchange in a building once defined by power imbalance and manipulation, the biennale was organized according to a radical system. Instead of a single curator, the exhibition was organized by some forty people who responded to an open call put out only six months ago. The result is an electrifying example of networked culture in practice; of collective action enacted within what is arguably still an institutional frame of the art world itself, an agora. To get a deeper understanding of AB4's aims, and to learn how this all worked in practice, I caught up with Poka Yio via email after visiting the exhibition during the opening days. An artist himself, Yio is co-founder of the Athens Biennale along with Xenia Kalpatsoglou and Augustinos Zenakos, and a co-curator of the current biennale.

Stephanie Bailey: Can you talk about how the 4th Athens Biennale was organized in only six months, and through an open call inviting not one, but many curators?

Poka Yio: When asked what, in our opinion, a biennale is, our answer is: "an X-ray of today." But what is today? In the past, the two-year period was perfect to put together such a big endeavor as a biennale, but this has changed dramatically. Now we are witnessing an unprecedented acceleration of history, and creators, theorists and all sorts of analysts fail more and more to grasp it. The financial analysts have failed to overcome the crash, the political theorists have failed to arm us with the political means to withstand the social pressure without the loss of civic and human rights, and art fails to present "today" in its meta-language.

The distance between the colossal sociopolitical changes and "us" makes our theoretical tools almost useless. Working with a single curator, as is the norm for biennales, is not enough anymore. From our point of view, a biennale has to make sense foremost of the context of the host city and then, if true to itself, it may as well be meaningful in the broader art universe. What is the point of creating a biennale in Athens or Istanbul, for example, both places that are friction points of titanic cultural and political tectonic plates, to come up with an exhibition that could easily be produced anywhere in the world?

The condition in Greece—and I mean the economic reality, the shrinkage of the middle class and then its extinction, the overall collective mood, the xenophobia and so on—has changed dramatically just in the two last years. We have noticed at least four distinctive major changes in the collective spirit. No foreign curator, unless he would be willing to spend two full years with a huge team of collaborators, would have managed to capture this phenomenon and come up with a relevant, meaningful outcome. Halfway in the course of organizing the 4th Athens Biennale we understood that we had to take a 90-degree change of course through uncharted waters in order to meet the situation in Athens. That was a lucky turn because we had to speed up and sprint in order to catch the train of change and achieve synchronicity.

SB: How did you formulate the systems within which this curatorial approach would unfold?

PY: We first made an assembly of creative forces coming from art, but also from social sciences and the media. Curators from Greece and abroad joined in, and the full team numbered more than 35 people in total. It was divided into three teams after the popular game  "Rock" (theory and curation), "Paper" (communication and curation), "Scissors" (production and curation). We worked together and in teams. We had long exhausting workshops and weekly meetings that were designed to both produce the framework of the 4th Athens Biennale, forge a common ground as well as engender a collective spirit between people with diverse backgrounds. What we came up with was a double blow to the standard biennale format: first the conclusion that a biennale is not an exhibition, it is an event, and second, the 4th Athens Biennale was not a finalized exhibition or event, but a device. The 4th Athens Biennale was to become a device that would host actions, collectives, works and so on. It would act as an outer shell: a new convention between the public and creative forces. If the public turned its back on it by not inhabiting this AGORA then it would have failed. 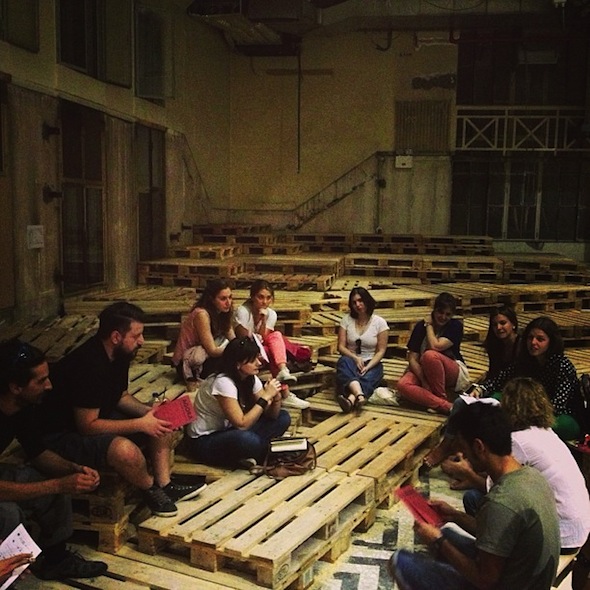 The Paper Team meeting in preparation for the 4th Athens Biennale, AGORA. Source.

SB: The politics involved in bringing this together—from rejecting the concept of the single curator, all the way to mediating the many voices that are included in this biennale: How has this worked within the framework of AGORA?

PY: The major difficulty when working with creators is overcoming the main barrier of the ego. We have all been used to working individually with the exception of architectural groups and art collectives, but we had none of those in the AB4 team. So we had to intensively mould a collective working model and a collective spirit. This was easier than we thought, since the urgency of the situation and the limited time left no space for unnecessary arguments or conflict.

SB: Let's talk about the concept of the Agora itself – can you tell me how the idea of the agora as a place of political, cultural, economic and social exchange has changed and evolved during the course of AB4? I also wanted to ask about the notion of networked culture that this biennale capitalized on so as to come into being—it feels like it was an attempt at putting a working model into practice; a horizontal mode of organization that also reflects on the movements that have emerged since the economic crash of 2008. I'm thinking here of course of the Indignados movement, which emerged out of Spain in 2011 and travelled to Greece after that, modeling itself on the Tahrir Square occupation, and which preceded the Occupy movement by months…

PY: The device that we came up with, AGORA as a place of exchange and creation of values came naturally. We were working with the building of the former Athens Stock Exchange, an amazing space—a church of and for the capital—where exchange of monetary values took place. The echo of the traders' shouts can still be heard in it. This public yet private space, operational just seven years ago and currently out of use and full of traumas literally and metaphorically, was the perfect allegory for the condition of Greece today: once cocky, now devastated. A major lesson and compass has been the Indignados movement in Greece, Spain and elsewhere. From their example, we understood that most people wanted to participate rather that be shown things: to be part of the change rather than be drawn into violent change.

SB: So, how does culture fit into this in terms of dealing with the challenge of networked cultures as an antidote or response to the current system?

PY: Culture is a value, but this value should be equally formed from bottom up and not imposed from top to bottom. We reinforced this belief through the open call that we first introduced this year. The question or thematic premise of AGORA was distilled in a single question: now what? This is what we have asked ourselves, the participants of the biennale and the public. Lastly, by designing the main space as a public agora, complete with a Pnyx—the ancient Athens hill where the public assembly took place. It has been made from Euro-pallets and by including a communal restaurant, we have created a space for the people to inhabit. We minimized the presence of artworks in the main space of the former Stock Exchange to maximize the presence of live events, such as workshops, lectures and performances. This may be the evolution of the model of biennales in general.

SB: That AB4 has engaged directly with the concept of the marketplace suggests that while we are dealing with local questions when it comes to thinking about something like the Greek crisis, we are also dealing with macro-level questions, in that it was really the global markets that engendered the current crisis. What are your thoughts on this in relation to the theme for AB4?

PY: Greece is now widely perceived as a huge experimental laboratory. Analysts and the global public have set their eyes in the chemical reactions taking place here and wait for the final result. We are not "PIGs"—we are Guinea Pigs.[1] This painful reactor that Greece is, gives us the power to be in the melding process. It is not enough to be energetic. We have to be drastic.

[1] PIGS is a derogatory acronym for Portugal, Italy, Greece, and Spain, the four European countries hardest hit by sovereign debt during the Eurozone crisis.