A collection of items from the Prosthetic Knowledge Tumblr archive and around the Web, taking a brief look at creative and sometimes poetic plays with the familiar audio technology of vinyl records. 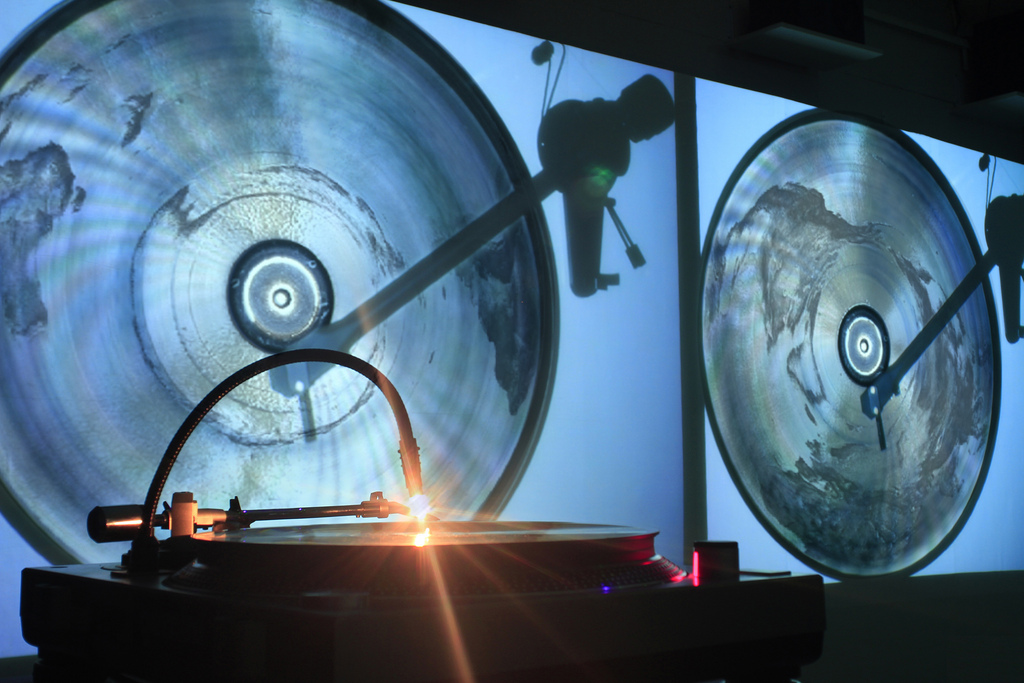 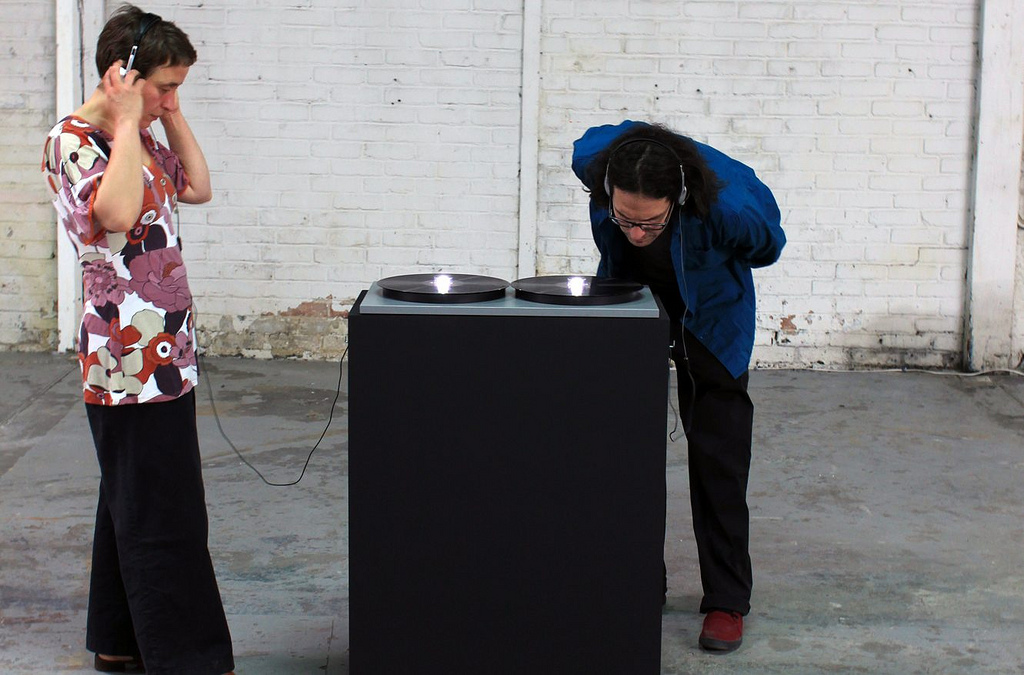 Flat Earth Society proposes a transposition of the earth elevation at the scale of a microgroove record. This engraving of elevation’s data on the surface of the disk generates in consequence a subtle image of the earth. When played on a turntable, the chain of elevation data crossed by the needle can be heard.

Interactive sound installation developed by Jesse Lucas, Erwan & Raguenes Yro / Avoka lets participants create music by marking sequences on a paper disk with a pen, which is then read by the machine--a sort-of Oramics Machine in turntable form:

DYSKOGRAF is a graphic disk reader. Each disc is created by visitors to the installation by way of felt tip pens provided for their use.  The mechanism then reads the disk, translating the drawing into a musical sequence.

The installation is above all a tool, which allows the creation of musical sequences in an intuitive way.  The notion of a loop, closely linked to electronic music, is represented here by the cycle of the disk.  The disk passes indefinitely in front of a camera fixed onto an arm.  This substitution for the needle converts the drawing into sound by way of a specific application program  (software).  Through this system, the sequential ordering of music is learnt in a playful way, at the same time creating a unique object, souvenir of the musical composition.

Yuri Suzuki, The Sound Of The Earth 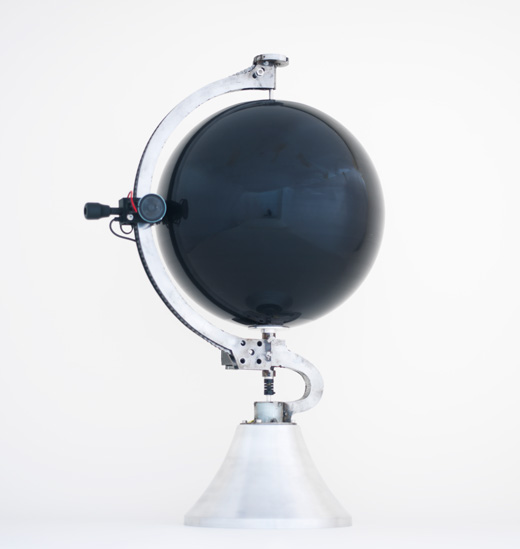 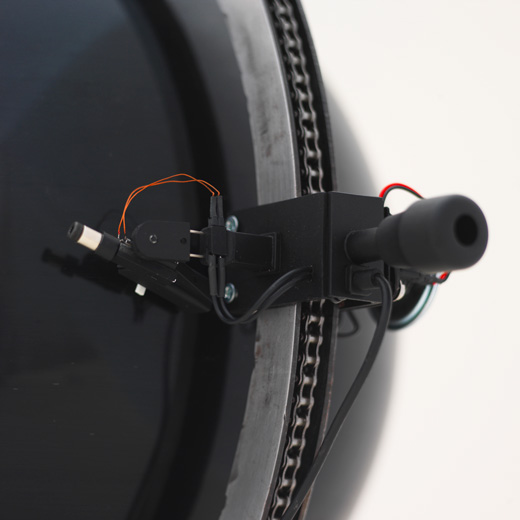 The Sound of the Earth is a content of Yuri Suzuki`s spherical record project, the grooves representing the outlines of the geographic land mass.
Each country on the disc is engraved with a different sound, as the needle passes over it plays field recordings collected by Yuri Suzuki from around the world over the course of four years; traditional folk music, national anthems, popular music and spoken word broadcasts.

An aural journey around the world in 30 minutes.

Suzuki's website includes a full audio recording of the piece. 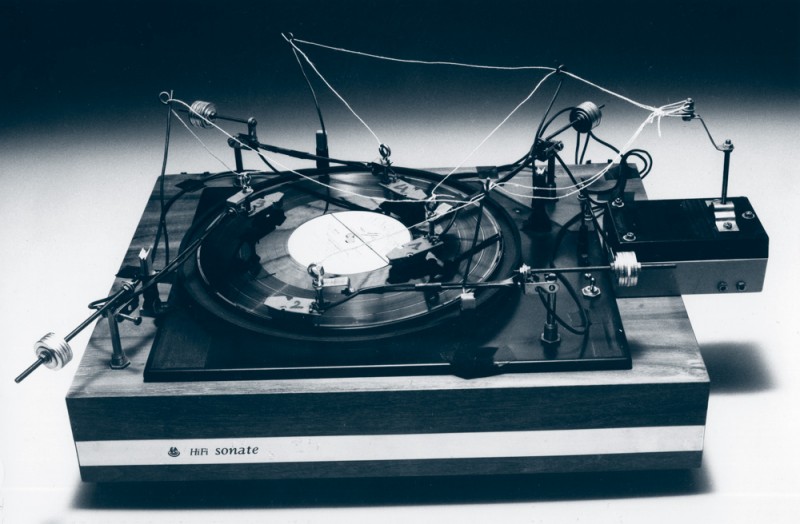 A work by Polish artist Wojciech Bruszewski from 1981. There isn’t much written online about this in English, apart from:

Record Player with four arms.
The best results: Pablo Casals - plays the cello in a ‘quartet’.

You can see a short Quicktime video of the work here.

More about the artist and his works here. 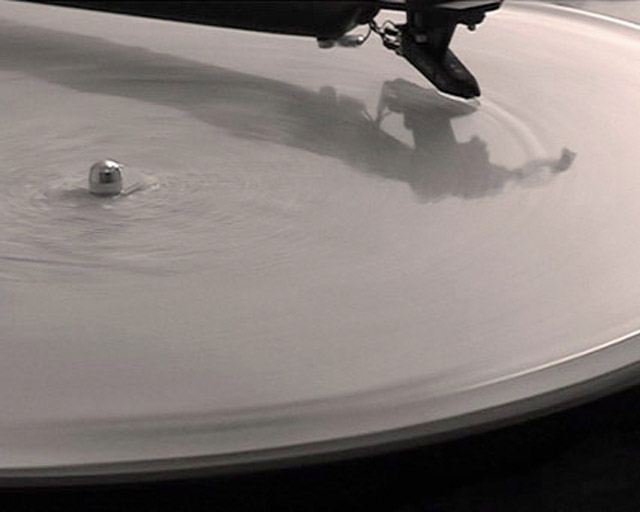 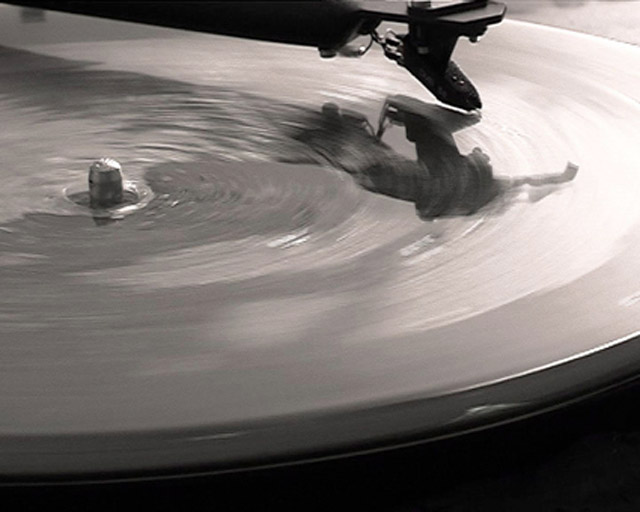 A fantastic piece from a few years ago by Katie Paterson comprising sound recordings of glaciers pressed into records made of ice:

Sound recordings from three glaciers in Iceland, pressed into three records, cast, and frozen with the meltwater from each of these glaciers, and played on three turntables until they completely melt. The records were played once and now exist as three digital films. The turntables begin playing together, and for the first ten minutes as the needles trace their way around, the sounds from each glacier merge in and out with the sounds the ice itself creates. The needle catches on the last loop, and the records play for nearly two hours, until completely melted.

An audio excerpt can be heard at Katie's website.

m(rpm)2006-2013
Iván Abreu, 2013
2013, retrospective exhibit: documentation and designed furniture.
After six years ongoing, m(rpm) was exhibit in the context of the collective exhibit "Entropy theory". The idea was rescue documentation from the project and combine it in a video-installation with videos, photographs, molds and three sculpture-furnitures. Besides, in the openning day the artist played an ice vinyl with the national anthem and another frozen disc stayed in an freezer designed as a sculpture during the exhibit period.

The photographs and videos were contained on a grid and narrated the history of the piece, from the first projects made of ice and the first ice vinyl to the last exhibit in Berlin in 2011. Some photographs also show the procedure to create the discs. The videos are a sampler of some of the live acts and exhibitions where the discs had been played.

The projectors and molds were lodged in a furniture designed specially for the exhibit. The design of the furnitures was thinked and guided by the vinyl disc edition decades; so, the whole installation got an atmosphere suitable with the pieces. The molds selected for the exhibition were the one used for the ice disc of the mexican national anthem ("Música y voz de la patría", 1967), the Keneddy's speech ("The presidential year", 1963) and "Los inmortales de la canción ranchera"(1979)

“Anthem” is an ongoing project that explores nationalism and geopolitics as a form of symbolic and contested territory. In this installation five reactive turntables that rotate according to the viewer’s motion through the installation produce a sonic landscape, shaped by overlapping layers of music and sounds originated by the continuos reproduction of national anthems found in vinyl records.