To mark the launch of McKenzie Wark's new book The Spectacle of Disintegration, Verso Books have offered Rhizome readers in the UK a chance to win a 3D printed Guy Debord action figure. 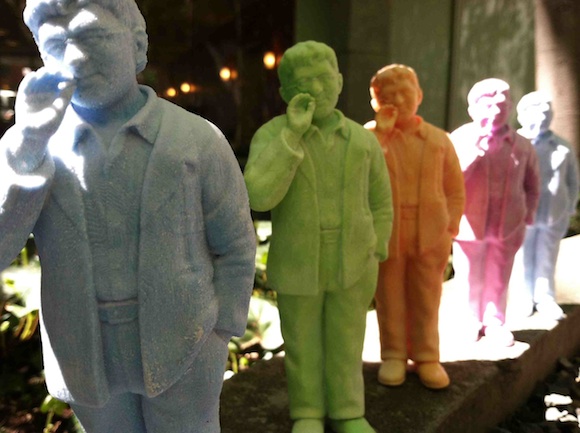 The figure is part of a limited edition run of 200 made by Wark, who was inspired to delve into maker culture because of Debord's own investment in craft as evidenced in the twelve handcrafted issues of Internationale Situationniste. (You can read more about this in Brendan Byrne's recent interview with Wark on Rhizome). It's important to note that you can also make your own Debord figure based on Wark's 3D model, which will be released under a Creative Commons license.

The questions, which were supplied by Verso, are after the jump. They are not to be taken lightly...

The prize will go to first person with all correct answers to the quiz below.  Two runners up will receive a complimentary copy of the book. The competition is open to UK residents only; entrants must email [enquiries AT verso.co.uk]. Please put SPECTACLE COMPETITION in the subject line or your entry may not be counted.

1.The Critique of Everyday Life is a seminal book that opened up a whole line of critical thinking about the small, everyday situations outside of the factory walls and beyond the official political sphere. Who wrote it, and in what year was it first published?

2. McKenzie Wark calls the experience of the everyday in our time the disintegrating spectacle. He is adding a fourth kind of spectacle to the three described by Guy Debord. Writing in the 60s, Debord thought both sides of the cold war were just variants of spectacle. Later, he thought that states such as France and Italy had combined elements of both into a third kind. What were the names Debord gave to these three variants?

3. The Surrealist leader André Breton wrote a poem, published after World War II, dedicated to the famous utopian writer Charles Fourier. Breton’s poem starts out with the narrator noticing a flower placed beneath his statue. During the Occupation, the Germans melted it down to use the copper for munitions. On which Paris street was that statue?

4. Debord’s comrade Raoul Vaneigem was rather more influenced by Surrealism, and via Surrealism by Charles Fourier, than some other Situationists. He even edited a paperback edition of Fourier’s ‘queer theory’ manuscript, The New Amorous World. What was the name of the Fourier-inspired utopia Vaneigem wrote about in 2005?

5. The great art historian T. J. Clark, who was briefly a member of the Situationist International, once recalled a demonstration in London which found him on the steps of the National Gallery in London. He and his friend debated there which painting within they would feel obliged to consign to the flames should the people ever storm through those illustrious portals. The masterpiece that Clark would have chosen was painted by whom?

6. The Situationist Gianfranco Sanguinetti pulled off a stunning prank in Italy, by publishing The Real Report on the Last Chance to Save Capitalism in Italy. Purporting to be from some insider to ruling circles or someone cognizant of ruling opinion, it argued that there was no harm in admitting Communists into government, as the Communists were not a revolutionary party, but were already acting in the interests of power in keeping workers in line. Under what name was the Real Report issued?

7. Next to Guy Debord, René Viénet is the best known Situationist film maker. His détourned films have a lightness and charm all of their own. His film Can Dialectics Break Bricks? uses a martial arts film as its raw material, and by gently moving a few minutes of film around and dubbing the actor’s voices into French, Viénet turns it into a critique of the Stalinization of the left during ’68. Who directed the film on which Can Dialectics Break Bricks? is based?

8. Debord’s ‘70s films Society of the Spectacle and Refutation of All Judgments were a quantum leap forward in complexity over his earlier cinema work, in part due to the resources of his new patron, Gerard Lebovici. Who was the film editor with whom Debord worked on these films, and who was the other famous French director with whom she worked?

9. Besides being Guy Debord’s second wife, Alice Becker-Ho wrote some very interesting books on the influence of Romani language on the ‘jargon’ of the dangerous classes, and as an important source for words not only in French but in other European languages. According to her glossary of jargon, what is the meaning of the word ‘baron’?

10. Besides his many accomplishments in the arts of writing, editing, cinema, and revolution, Guy Debord was also a game designer. On the writings of which military theorist did he claim to have based The Game of War?

12. The Beinecke Rare Book and Manuscript Library at Yale had the holograph manuscript of Guy Debord’s Society of the Spectacle on display for a while. Did that manuscript and other items from Debord’s papers end up being sold by Alice Becker-Ho to the Beinecke, or somewhere else?

In an attempt to begin a public and critical discussion of Wark's rather silly provocation (the Guy Debord action figure), I would like draw your readers' attention to this collective statement, which was signed and published yesterday by five different bloggers from all over the English-speaking world (America, England, Denmark, Australia and New Zealand).