A collection of examples from the Prosthetic Knowledge Tumblr archive on the modern adoption of an older computer output technology - the plotter.

Invented in 1953, the plotter was a vectorial drawing output device developed by Remington-Rand for the UNIVAC computer for technical drawing. As other forms of printers nor monitors were as ubiquitous as they are now, the plotter drawing became the main format for early computer art, which can be seen by the many examples produced by the Algorists.

As new approaches and availability to technical means, plotter or vector drawing has over the last ten years had a renaissance, with various projects utilizing this method for 'live' drawings. Many move away from traditional pen drawing, utilizing other media such as lasers, spray paint, and brushes. Here are a small collection of examples which take the plotter principle and apply it in new and interesting ways.

Lunar Trails is an interactive installation, first commissioned by the Dublin Science Gallery for their GAME exhibition, running from November 2012 to the end of January 2013.

It features a full size arcade cabinet running the vintage 1979 game Lunar Lander. As you play the game, the path that you take is rendered on the wall with a large hanging drawing robot.

The trails build up to produce artworks that are solely created by the game players, and is a reflection of all their individual journeys to the surface of the moon.

Animation installation by Phillip Artus is a looping narrative of an evolving snail, constantly drawn with laser on a revolving photosensitive surface.

A snail invents the wheel and goes through a cultural evolution to finally get back to its origin.

A laser animation is projected at an angle of 360° onto a column, so that the audience has to walk around to follow the course of the snail. The projection surface is of a phosphorescent material, which creates an after-glowing trail that fades out slowly.

Mechanical drawing installation by Mattias Jones creates a room-filled one-line drawing which imitates the flight pattern of a bee.

MIND OUT : PROJECT LONGARM from Elliot Holbrow on Vimeo.

Towards the end of 2012, as part of The Festival of the Mind in Sheffield, myself and a small team of technicians, coders and mathematicians developed a drawing system and put it to work. The robots drew one line pattern solutions, the shortest line possible, derived from theories on how bees fly from flower to flower. It ended up covering three walls and the floor of a twenty foot cube in one unbroken line.

A device to record and reproduce the exact brushstrokes of calligraphy artist masters.

This system stores calligraphy movements by using a brush where the handle and tip are separate. The two parts are connected, with the head as the master system and the tip as the slave system. Characters can be written by handling the device in the same way as an ordinary brush.

Unlike conventional motion capture systems, a feature of this one is, it can record and reproduce the force applied to the brush as well as the sensation when you touch something. Until now, passing on traditional skills has depended on intuition and experience. It’s hoped that this new system will enable skills to be learned more efficiently.

A drawing machine by Jürg Lehni from 2005, works like a plotter but draws on a big plane of semi-opaque glass. 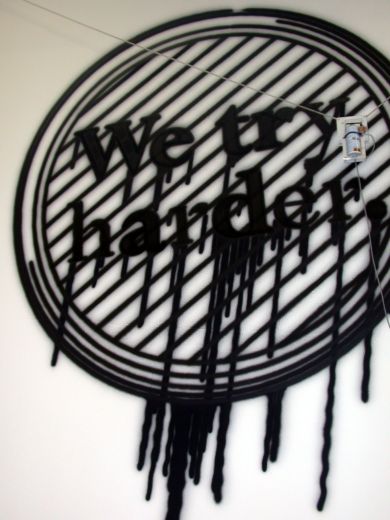 Also of interest: “Computing/Drawing With a Vintage Pen Plotter” by Carl Lostritto - modern drawing experiments with an older technology.

You should check out this very large scale plotter (16'x12') we built here in Colorado for drawing in sand, powered by an arduino Mega.
[vimeo]http://vimeo.com/32857643[/vimeo]

[img]http://stephencartwright.com/files/gimgs/54_stephen-cartwright-xyweb3.jpg[/img]
There will probably be others chiming in here - but I'd also point to my colleague Stephen Cartwright's latest work, in which he's doing long-exposure photographs of an LED on a plotter to create maps of his daily movements :

oops - and the link: http://stephencartwright.com/projects/xy-plotter/