AD BOOK, An Interview with BFFA3AE
By Buyong Kim

Badlands Unlimited’s recent e-book, AD BOOK, is a collection of ads - as it’s title suggests - stitched together by BFFA3AE, a NY based collective of artists including Daniel Chew, Micaela Durand, and Matthew Gaffney. But Lo, AD BOOK! - the title is as giving as “Untitled.” AD BOOK is not simply a book of ads with ads, it is also a book FOR ads. An interactive page-flipping object that cross and intersect the complexities and ad-anxieties that linger on fantasies and futures; realities and escapes; costs and risks; identities and aliases; representations and reps. The introduction by Knight Landesman gives a good pow-wow through the world of ads and its possibilities. Then unfolds the visceral worlds of ads, artists, arts … 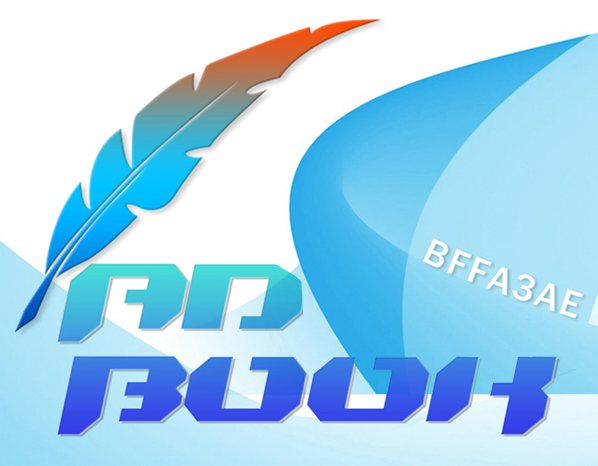 From the cover of AD BOOK

This e-book consists entirely of advertisements by artists. Normally advertisements are the stuff you don’t want but need (to finance the thing you are reading). The book has everything from a poster of Real Fine Art’s Michael Krebber show Here Comes The Sons from 2011 to an ad for net artist Daniel Leyva’s ongoing podcast Purecast. It’s full of things that happened, content that is still happening and stuff that’s supposed to happen. It’s like buying a space on the internet that you can carry around with you. You can own this weird space and share it with whoever you want offline: on the subway, on your lunch break, in your bedroom, wherever.

While making AD BOOK, we were thinking about how similar our interactions are with a magazine as compared to a catalogue, a book of neighborhood coupons, or even the interactions we have with our own network through social media. It was our attempt at connecting these seemingly disparate experiences. It is also, taken as a whole, an advertisement of ourselves. 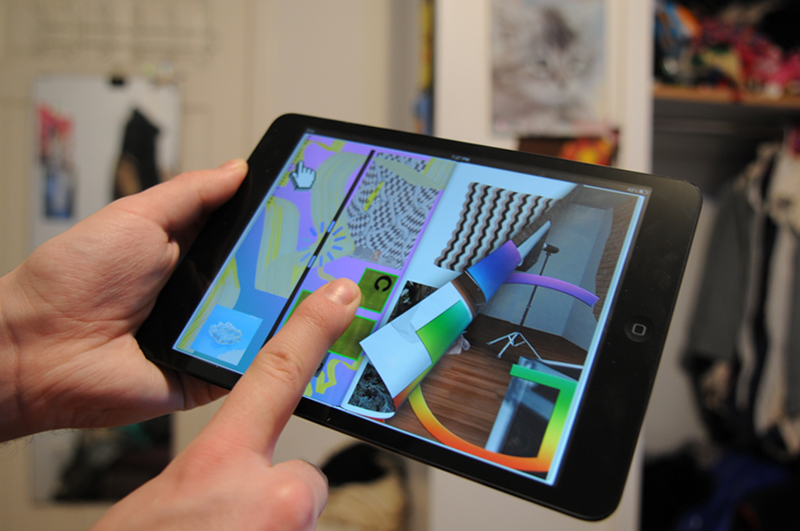 BK: While I was “flipping” through AD BOOK I couldn’t resist following hyperlinks – whether it was simply for the sake of voyeuristic page jumping and snooping in the way I navigate through social media platforms (twitter, tumblr, and all the good stuff), I’m not so sure. But in the midst of my random jumps to and from pages, I recognized that AD BOOK is also host to multiple temporalities. As in, there are actual dates on some ads that are from the past, ads that indicate ‘coming soon,’ ads that are in the relative future, so on and so forth.  Personally for me, this sense of time warp gives me a new buzz that differentiates AD BOOK from the high of, lets say, snooping through Facebook. In the process of compiling AD BOOK, how did you approach time sensitive ads, if any, in relation to its release? What is time in AD BOOK and how does it matter?

Because AD BOOK itself is time sensitive, I think having these varied temporalities in the book is useful in rooting the book in a specific moment. Words such as “coming soon” introduces an urgency and places the reader in a position where they are anticipating something, even though it may be for an event long passed. Some ads were for things that had already passed years before, but can be read as an event that is still legible in the moment that AD BOOK came out. Because we were trying to illustrate the moment of the book, we had to take into account that moment’s past and its imminent future.

BK: You mentioned that AD BOOK is one of the most democratic e-books to exist. What do you mean by that?

Any advertisement was published as long as it was paid for.

BK: In what process of the AD BOOK’s materialization does it distinguish itself from other e-books and/or artbooks?

A lot of art books order art sequentially. AD BOOK has no sequence. It has been a lot of drag n’ dropping (click-wise) as well as lots of coding to make it look and feel so fluid. It resembles a high school yearbook with ad space from your local hardware store but with art. That’s what makes it fun. The book splits pages into halves and quarters and creates particular associations in the book between the art and artists involved that made it very BFFA3AE to me. And by that I mean, it was kind of ridiculous but with very real people involved, which is how I feel about the art we make together.

We hadn’t anticipated this element in advance, but the extent of pure administrative work involved (compiling contacts, promotion, drafting invoices, etc...) was so massive that it began to take on its own role in the concept. It breached the traditional image you get when considering the crafting stage in art making in this way that brought our concept into a strange present day reality - like we were planning some average networking event or writing yellow pages, but in a really great way that bled back into the concept.

I’d also like to say I listened to a lot of t.A.T.u while coding the e-book. Well, the club mix version anyway. And I’d like to think this book has whatever that means in it.

BK: I definitely hear club mix in AD BOOK! I mean, why not audio?

While AD BOOK does take advantage of certain functions available only to e-books, I think we did not want to stray too far from the idea of material based books and magazines. We wanted it be something that you flipped through with no page ever demanding your attention the way something like audio does, literally taking up your time for the duration of the audio.

BK: You put together some very interesting aspects of an ‘ad’ in AD BOOK, and have crossed many, if I may, boundaries of advertising that one might understand from contemporary magazines, web, etc... For instance, such that an ad is produced with a lot of money and therefore for more money. Could you elaborate more on how you have determined the cost of a page and the spectrum of selection (submission and solicitation)?

The solicitation of ads was done by open call, primarily across our own networks. There were a few guest appearances by strangers who had randomly heard of the book, but were in the end connected to us somehow. There were a few instances of friends recognizing names in the book we didn’t. It was a weird way of getting to know someone.

As for the cost of each ad, we knew we wanted to differentiate how value was normally assigned and exchanged. With a magazine, the pricing of ad space works like real estate - higher visibility demands a higher rate. Because the book comprised our own network and friends, we wanted to take into account our relationship with each individual and determined a semi-randomized price based on this.

BK: Do you see AD BOOK as a beginning of a series?

Definitely, I think it sort of has to be. Like

said earlier, it’s so specific to this moment in time and would need to evolve to maintain its relevancy and even power I would say. I would actually compare it to Disney’s Fantasia, which was originally intended to be re-released each year with some new segments mixed with some of the segments from the version before. Had they gone with this plan, it would have been a showcase for the evolution of the medium and different creators at that given time, contrasted with what and who came before.

BK: I gather that social networking was key to the making of AD BOOK. But I also sense that AD BOOK culminates into a network in itself, kind of like the Yellow Pages as you mentioned earlier. As a result of AD BOOK’s interactivity and digital fabric, and now prospects of a continued series, do you anticipate or perhaps already have experienced an exponential expansion in submissions of ads (kind of like a wave of ‘friend’-ing or ‘follow’-ing)? On that note, how do you visualize the future of AD BOOK’s content and size?

Some people were hesitant to submit until they began hearing their friends/networks talk about their own AD BOOK submissions, which I think is kind of funny/interesting in that it reflects how a user base grows for a lot of new online networks/platforms.

While we are not currently accepting any submissions for a future AD BOOK, I think the process of submission will remain the same every time we choose to remake the book. This means that the content and size of the book will depend on how many people are willing to pay for an advertisement. We hope that it will be something bigger the next time we make it, but in the end don’t really have a say in that.

BK: The AD BOOK had a solo exhibition at Gloria Maria Gallery, Milan. How does this change the fabric and function, or more so, the lifespan of this particular e-book. What does it mean to have an interactive medium to be placed on a flat screen/gallery space? 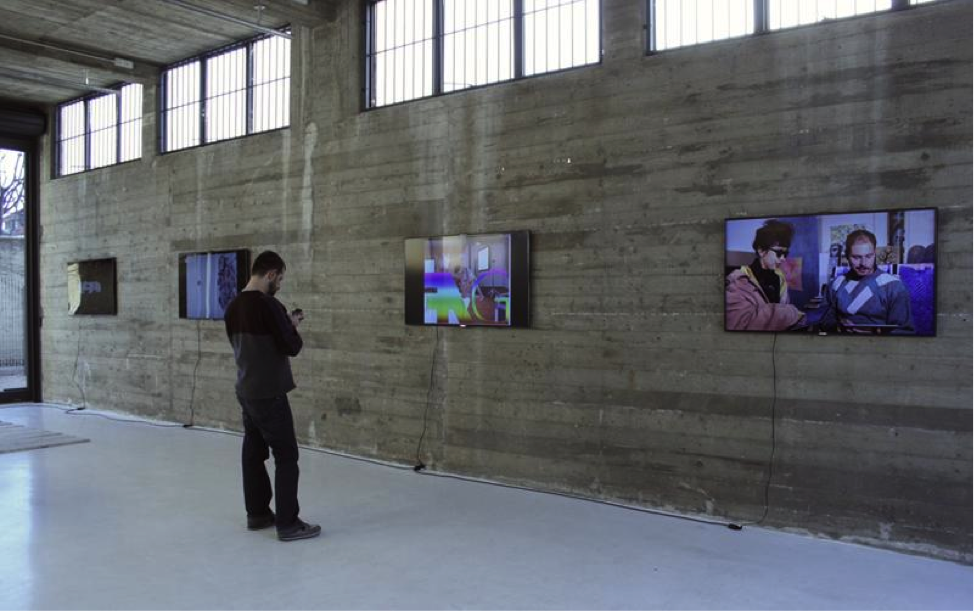 We made AD BOOK: Visual Express Edition for Gloria Maria Gallery as an extension of the project - an advertisement for the book itself that encourages each visitor to download AD BOOK at home on their own devices through video teasers as well as the book on the iPad at the gallery.

In addition, we produced an e-book trailer featuring a few artists from AD BOOK flipping through the e-book as they asked one another, “What kind of art do you make?” to “Do you know this guy?” the sort of networking chatter we all do.

This worked in the same vein as the preview event we held last year at the Goethe Institut in New York organized by David Horvitz. Occurring on CyberMonday, it involved a first look at the AD BOOK as well as a networking event where people were encouraged to mingle, create name tags, and exchange numbers. It was a space not only for self promotion, but also a space where the book could be actualized in a physical realm. 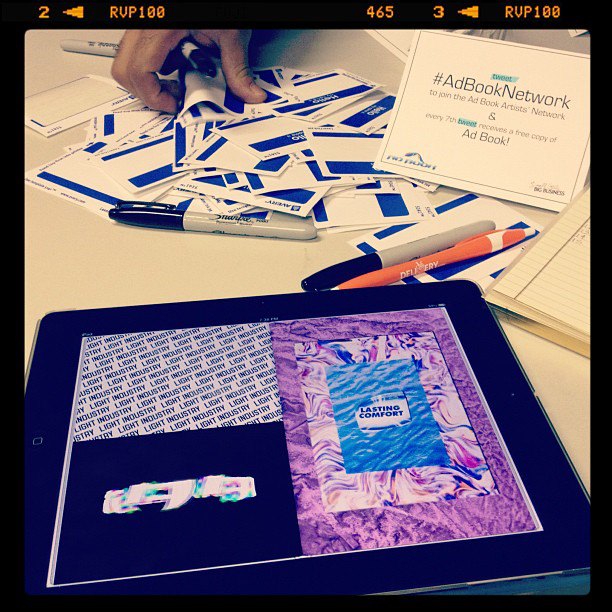 BK: To continue on with the question of the making-of -- perhaps taking a step back from the meta of it all - to what extent does the e-book as a medium allow and/or limit content?

I approach e-books like I do with websites. I surf the book, am attracted to certain areas, go away for awhile then come back to it. AD BOOK has over 200 links, jpgs, gifs, emails.  A lot to keep you busy. It’s both like a bookmarked website and an address book. E-books allow sharing the kind of art that looks great on a computer and that’s really why I love it. It's always a negotiation when coding e-books you never know if it’s going to feel right for the user/reader. At Badlands, we focus on the e-book experience what makes it different than the softcover. I think the line between design and art is becoming more seamless in digital publishing and it’s pretty exciting to be a part of it.

BK: I’m going to end with the most generic, and in a way, most crucial question. What’s next for BFFA3AE? AD BOOK?

Pay rent. Wait for the theatrical release of Spring Breakers. Tweet/Instagram/Vine about it. People need to buy this book is what needs to happen next with AD BOOK.