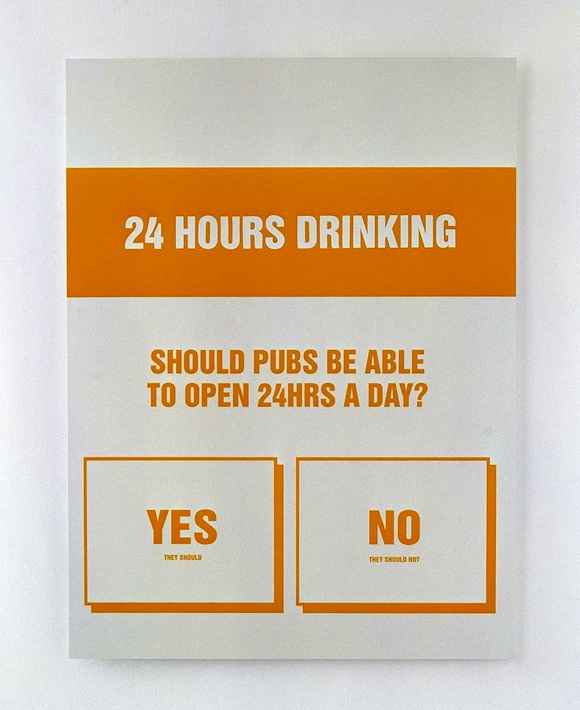 Work from the series Todays Questions by Eva Weinmayr.

NARRATOR (@Narra_DowningSt): She pushes her bike to the front door of No 10 and rings the bell. Samantha Cameron answers the door, smiling. #Downing_St

EVA (@Artis_DowningSt): Can I leave the bike in the hallway? #Downing_St

SAM (@Sam_DowningSt): Of course. Just lean it on the Giacometti. #Downing_St

The above lines are from the opening scene of Downing Street, a Twitter play created by artist Eva Weinmayr (of The Piracy Project) in response to the artist’s real-life brush with the eponymous halls of power. In March 2007, Weinmayr sold two works from her Todays Questions series to the UK Government Art Collection, which were installed in the British Embassy in Paris. Later, Weinmayr was informed that Samantha Cameron had decided to hang the work in the Prime Minister’s private residence when her husband took office. The artist’s subsequent attempts to reach the Camerons were ignored; Downing Street is a playfully imagined version of what their conversation might have been like.

In the play, after leaning her bike against the Giacometti, the character based on Weinmayr (@Artis_DowningSt) surveys the art on the wall, talks to Samantha (@Sam_DowningSt) about the national art collection, the funding structure for the arts in Britain, austerity, and life and art at 10 Downing Street. It's funnier and more illuminating than it sounds.

Read the play as it unfolds live by following the #Downing_St hashtag on Twitter, beginining at 8PM UK time today, June 25. You can read more about the play here, and see the performance’s cast here.