Chariots of the Gods: A spaceship lands in Bogotá
By Alexander Keefe 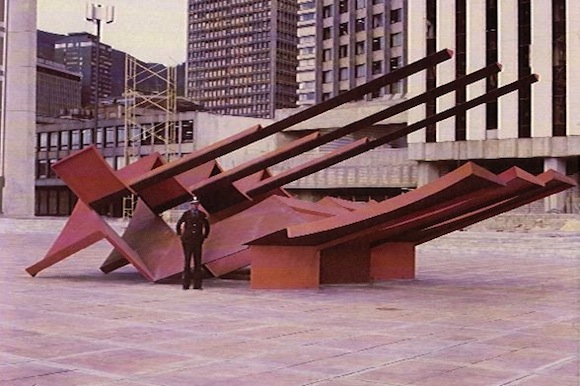 The morning of April 17, 1980 dawned cold, gray and damp in Bogotá. In other words, it was like most mornings there, with a low leaden sky and the dark cordillera of the Andes looming like a wall over the bleak altiplano and moorlands. It was just like any other autumn morning in Colombia's capital, except for two things: one was the depressingly familiar month-old hostage crisis at the Dominican Embassy; the other was the spaceship. And yet there it was, right in front of the convention center downtown, twenty-five metric tons of spiky polychromatic red and orange iron, ten meters long and angled at the heavens, surrounded by tall gray buildings, fussed over by pinstriped knots of bankers and government officials and apparently awaiting liftoff. El Tiempo, the country's newspaper of record, carried the back page headline: "Hoy inauguran nave espacial de Ramírez Villamizar" ("Ramírez Villamizar's spaceship to be inaugurated today"). Eduardo Ramírez Villamizar's Nave Espacial, conceived and designed in 1977 and installed three years later in the city's Plazoleta del Centro de Convenciones, was only the latest—and most dramatic—in a series of monumental, geometrically abstract sculptures that had transfigured public spaces in Bogotá and beyond. The sculptures appeared to be at once unearthed – ancient relics from some occult pre-Columbian fantasy– and unearthly, like heavily armed spacecraft menacing some distant sun. It was a visual language that warped time, like a wormhole connecting two invisible planes of alter-reality: on one side, a prelapsarian Andean utopia, and on the other, a well-ordered future as yet no more functional than the spaceship. And it leapfrogged over a whole lot of pain.

Modernism arrived late in Colombia, with a scream. On another April morning in Bogotá, this one in 1948, thirty-two years earlier, charismatic center-left presidential candidate Jorge Eliécer Gaitán was murdered, triggering bloody riots known as the "Bogotazo" that left much of the city destroyed and several thousand of its citizens dead. The nation was launched into a state of undeclared civil war. La Violencia, or "the Violence" as the conflict came to be known, lasted eighteen years, took some 200,000 lives and sent a generation's worth of young Colombian artists, intellectuals and writers into self-imposed exile in Europe and the United States. By the late 1950s, when they started trickling back, the art of the pre-war ancien regime—with its cultural isolation andits Bolivarian imaginary of creole aristocracy and Spanish feudal romance—had lost its appeal for the returning artists, who embraced explicitly, self-consciously new ideas and aesthetics styles.

And, at the same time, they also embraced certain old ideas: alongside the European and American avant gardes, artists were rediscovering their own pioneering pre-war Latin American modernists, especially the Uruguayan visionary Joaquín Torres-García (1874-1949). Torres-Garcià hadcrafted and disseminated a form of geometric "universal" constructivism that drew heavily from European models—he had spent the decade prior to his 1934 return to Uruguay in Europe associating with Piet Mondriaan, Theo van Doesburg and other members of the Paris-based avant-garde—but was at the same time thoroughly Latin American, affiliated with the continent's antiquity through the inclusion of pre-Columbian pictographs and symbols. While European expats and travelers of the period tended to fetishize Latin America and its antiquities as oneiric figures for the technological West's irrational Other – Breton famously described Mexico as "the most surreal country in the world" – Torres-García saw, instead, a spiritually advanced blueprint, a utopian model for the reconstruction of a fractured world. It mattered little that Torres-García's own exposure to Andean antiquity happened well before his return to the continent, in Paris, elbow-to-elbow with the surrealists at the Louvre's Les arts anciens de l'Amérique exhibition in 1928; his innovative replanting of constructivist order in the indigenous soil of pre-Columbian geometry, reason and spirituality was enormously influential, leaving its mark on subsequent generations of Latin American artists ranging from the early Argentine collectives Grupo Madí and Arte Concreto-Invención to Brazil's neo-Concrete movement.

Ramírez Villamizar (1923-2004), who met Torres-García shortly before the artist's death in 1949for whom Torres-García was an important influence, spent much of the period of La Violencia as a young painter in Paris' large Latin American expat community. The son of a provincial goldsmith who initially trained as an architect at Bogotá's National University, Ramírez Villamizar countered the trauma of Colombia's bloody mid-century by adopting a style of cool, informal abstraction. In 1957, with his first big public commission – a golden relief mural for the Bank of Bogotá titled "El Dorado" – he became the figurehead for Colombia's emerging modern art scene. Ramírez Villamizar called himself a Colombiano al revés, a "reverse Colombian." "My paintings used to be expressionist," he wrote in 1985, "with religious themes, poetic themes, violent themes. Not the actual violence that we were suffering in Colombia, but rather violence that was dissembled and poetic. I was painting Calvary scenes, animal skulls... and all of this I was doing without thinking that right there alongside me there was a real violence coming to a head. And later on I reacted to that violence but not by describing it, rather by showing the opposite of the violence—construction, order, civilization."

It was no accident that the key reading material for Colombia's intelligentsia during the late 50s and early 60s was a literary journal called Mito, or myth – what the nation needed was no less than a new origin story, a narrative refounding. In the visual arts, guided by Argentine-born critic and Bogotá-based über-curator Marta Traba, the idiom of that new myth was to be geometric abstraction, which had already established a strong presence across post-war Latin America. Traba, an Argentine-born critic who arrived in Colombia in 1954 after an education in Europe, aggressively promoted abstraction through exhibition catalogs—including a text for the 1958 Bogotá exhibition "Abstract Painting in Colombia," with work by Ramírez Villamizar—as well asarticles in the country's major newspapers and journals, radio broadcasts and art appreciation programs on Colombia's brand-new television system. Bogotá's geography, wrote Traba, had conferred on it "the air of a sacred place... a ritual space." Indeed, the cold rain of Bogotá's nebulous highlands combined with Traba's icy blasts of modernist purism created ideal conditions for the emergence of a singularly hermetic style of abstraction known as Colombian Constructivismo. The quasi-monastic Colombian constructivists led by Ramírez Villamizar and his contemporary Edgar Negret forged a way of making art that explicitly rejected surrealist solipsism and expressionist violence in favor of a revolutionary, autochthonous avant garde, an art for the people that was in equal parts archaic and futuristic. It was a new order they abstracted from the pre-Columbian rubble, imbibed like an Amazonian hallucinogen, reassembled and resurrected like the messianic body of a modern Inkarri and put to cosmic flight under the sci-fi sign of the Millenium Falcon.

It would be a mistake – an easy one – to buy too heavily into the parameters that critics like Traba set up for Colombian Constructivism, and for Latin American geometric abstraction more generally. Artist and historian Nicolás Gómez Echeverri has written that Traba was the "most enthusiastic advocate of abstract art as an expressive means that engaged with the assessment and appraisal of forms, colors, pictorial effects and composition elements, without referring to the objective world.” Her influence was such, he notes, that her position "led to an expansive evaluation of abstract art in Colombia as a [sic] something that is distant from the semiotics of the real world." Indeed it would be safe to say that, for Traba and her circle, a work like the Nave Espacial succeeds in direct proportion to its distance from figurative reference. But there was an irrational and unruly streak in Negret and Ramírez Villamizar's work, a taste for the space age and the occult that resisted these sorts of modernist straitjackets. This streak was evident even in early pieces like Ramírez Villamizar's white-on-white reliefs – marking his transition from painting to sculpture – or Negret's "Magic Machines" from the late 50s and 60s, when both artists were hanging out in New York with Frank Stella, Ellsworth Kelly, Jack Youngerman, Agnes Martin and Robert Indiana, being mentored by Louise Nevelson and participating in shows at the David Herbert Gallery. In a catalog text for one of them in 1959, critic Franklin Konigsberg described the Colombians' works as "fantastic vehicles... man's means to escape this world and penetrate the mysteries beyond." Lawrence Campbell, in Art News, described them as "a kind of Neolithic art expressing the spirit of the machine age." By the late 1960s, under the influence of Latin America's burgeoning new science fiction scene and the technological sublime evoked by the very real space programs in the US and elsewhere, the previouslyembryonic references to spiritualized machinery in the new Colombian sculpture had developed into fully staged space opera, evidenced by titles from the period like Ramírez Villamizar's "Space ship," a title he gave to several works—"Construction like a space ship" and "Salute to the astronaut"—or Negret's "Space Sailor," "Gemini," "Cape Kennedy," "Navigators" and "Dockings." The sculptural style that Marta Traba once positioned as a dialectical vehicle to escape the chaos of Colombian reality had turned increasingly toward large, public depictions of, well, actual vehicles to escape the chaos of Colombian reality.

The Nave Espacial in Bogotá was conceived upon Ramírez Villamizar's return to the city after a long productive stay in the US, where he executed several large public sculptures, most famously a 1973 geometric piece at the Kennedy Center in Washington, DC titled "From Colombia to John F Kennedy." Coming back to Bogotá, this time to stay, he established his home and studio in the verdant northern suburb of Suba, in a house with a huge garden, and began collecting snail shells and pre-Columbian art – both key sources for his idiosyncratic sculptural vocabulary – and designing spaceships that drew inspiration from the skeletons of birds. But if his work from the 1970s was poised somewhere between the pre-Columbian, the biological and the astronomical, a visit to Machu Picchu in 1983 decisively tipped the scales toward the former. "Surrounded by solemnity and silence, I perceived the unity and harmony of these tremendous stones," he wrote, "transformed by the changing Peruvian sunlight." In the mid-80s Ramírez Villamizar's sculpture took on increasingly Incan overtones, as did in fact Edgar Negret's, both of them trading spiny, spiraling dynamism for something more timeless, architectonic and oxidized. 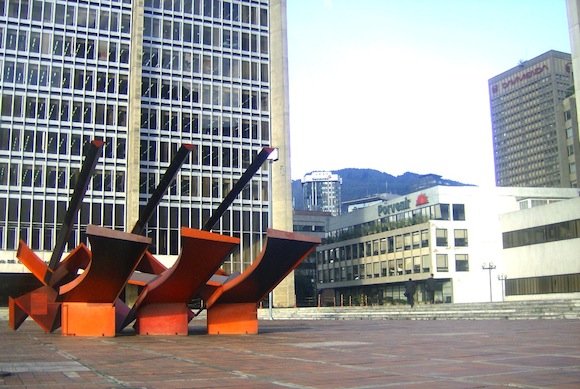 And with that shift, the completely imaginary Colombian space program drew to a close. These days, the Nave Espacial of Ramírez Villamizar sits in almost undisturbed solitude, access long since cut off by various building projects (even employees of the Banco del Café next door tend to use other, more convenient ways in and out of the building than the one that leads to the spaceship). Difficult to find and hard to visit, it is a public sculpture with hardly any public, a utopian dream fallen into disuse.

The Violence has proved rather more enduring.

Three things: it's Colombia, not Columbia–even in English. Jorge Eliécer Gaitán was killed in 1948, not 1938. And Ramírez Villamizar never met Torres-García personally. In 1950 the Colombian artist left the country for Paris, but TG had already died by then. RV knew about TG through his books, especially, "Universalismo Constructivo" which he read shortly after its publication in Buenos Aires in 1944.

Thank you for the detailed feedback. I'm changing the date of Gaitán's death and the one instance where Colombia is misspelled. Pre-Columbian is correctly spelled with a u.

I'll discuss the reported meeting with Torres-García with Alexander.