Artist and erstwhile Rhizome staff writer Tyler Coburn's recent project I'm that angel includes a book and performance narrated by a fictional “content farmer,” a writer (typically freelance) who creates large amounts of text that is designed for maximum traction with search engine algorithms. The performances typically take place in data centers or spaces in which the physical infrastructure that supports "the cloud" is made manifest.

We corresponded about the project via e-mail.

MC: Can you talk about the process of approaching data centers as performance venues? How do you explain the project to them, and what sort of conversations ensue?

TC: As you might imagine, it’s fairly difficult to solicit interest—let alone a reply—from these centers. To date, I’ve e-mailed upwards of a hundred of them in various cities throughout the Western Hemisphere, framing the project as a reading that engages cloud computing and thus gains meaning from being sited in a data center. Little or nothing is said about the content of the book, as the occasionally punctuated, maddening language would probably do my performance request few favors. This, of course, breeds a new set of concerns. At a few performances attended by company members and clients, for example, I worried that my reading would be stopped short at the fourth or tenth “fuck.” Instead, I emphasize that these readings deliberately adapt to the given conditions and protocols of a center. Audience capacity will be no greater than the existing number of chairs in a conference room, for example, and I will introduce no elements other than the book and the guests. The center, in a sense, functions as a readymade. 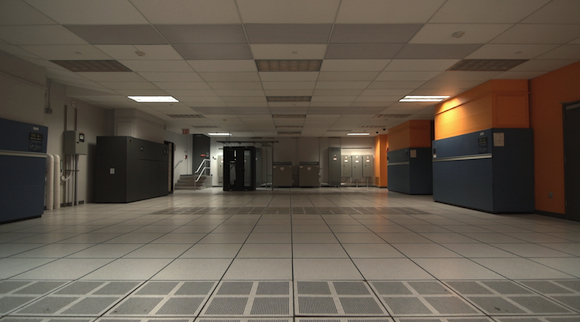 My readings are always followed by site tours, which facilitate access to the more secure rooms in the centers and also introduce guests to the people involved in the management of the facilities. Ethically, I see the tour as an opportunity both to allow the hosts to discuss their company’s involvement in the field of information storage and for guests to open discussion about the political, environmental and security issues at hand. Centers have generally proved receptive to conducting tours, in part for the marketing opportunities they present. I’m not sure if any have succeeded in making new clients of my guests, but on a few occasions, we have happily emerged from the windowless bunkers stuffed with phyllo, sushi and printed matter.

MC: I'm surprised that the data centers would be open to giving site tours; somehow it seems to run counter to the image of cloud computing that we are sold—that it is somehow unmoored from the quotidian constraints of physical facilities. In the I'm That Angel book, you describe it as "an invisible, intangible, imponderable agent so luminiferous and miasmatic like a nuclear return..." Is this incongruity between the imponderability of the cloud and the physical fact of these data centers something that comes up during the tour discussions? Or, can you give another example of a discussion that has come up during one of your tours? (And, what is a nuclear return?)

TC: I’m as surprised as you. I’ve conducted readings and tours in six data centers throughout Europe and the United States and don’t have any more insight than when I began the project. In each case, my guests and I consent to a center’s clearance measures, which are sometimes minimal to the point of nonexistent and, in other cases, marked by biometric hand scanners, “Man Traps” and the security aesthetics of a Bond lair or set from 24. Photography is also sometimes permitted, though it’s telling that the resulting images manage to render the sites the stuff of Photoshop fancy: the server racks float above the elevated flooring, seemingly more at home in composite layers than in the actual facilities designed to house them.

This is part and parcel of the incongruity you mentioned. The relationship between the server and the cloud is a frequent topic of discussion on the tours, largely because some audience members are unfamiliar with data centers and none have previously set foot in them (excepting a Swedish friend who went to a rave in Pionen, when the nuclear bunker was languishing in the post-Cold War years). Facilitating access is thus a means of calling attention to the physical and geopolitical conditions that underpin the metaphors of diffuseness, virtuality and immateriality that have periodically attached to science and technology—from the “luminiferous” aether to the “invisible, intangible, imponderable agent” of electricity, as characterized by a 19th Century "authority" quoted in James Gleick’s The Information. As such, tours engage the ethical aspects of data center management. Carrier-neutral data centers often choose to have no knowledge of the contents of their clients’ servers, for example, and only intervene when the injunction comes through a given country’s appropriate legal channels. Seeing as fiber network infrastructure maps discontinuously on nation-states, complications inevitably ensue. One tour guide even predicted a future of countries soliciting external cyber-attacks as grounds to “enforce” the protection of civil liberties, thereby territorializing network control following certain existing templates… 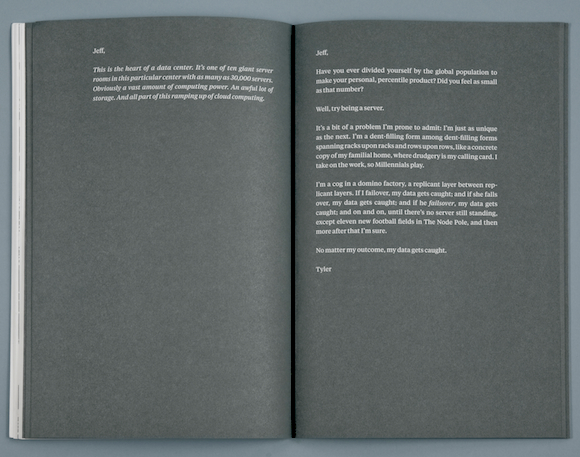 MC: My understanding of your project is that it doesn't only explore the relationship between physical territories and the cloud, but also the interplay between personal subjectivity and the cloud. can you tell us a bit about the main character in your performance, the content farmer? What kind of glimpse do you give into his inner life? Or is the focus more on the material conditions of his existence?

TC: That's right—subjectivity is at stake. I consider the book to be a confessional, which Northrop Frye has characterized as one of the four main forms of fiction: "introverted, but intellectualized in content" and necessarily, reflexively public. In the text, I attempt to work against the deterministic mindset that new technologies produce and delimit new forms of subjectivity and sociability. This is not to ignore their impact on how we work, play and affiliate, but rather to remind that we are not the first generation to meditate on the self (and the author) set amidst emergent forms of communications media—that the self is an ongoing project. The book is thus peopled with quotes by sympathetic predecessors, from Jonathan Swift and Viktor Shklovsky to William Burroughs & Brion Gysin, Nick Land and, most importantly, Samuel Richardson, whose Pamela was but the most egregious example of the demand for protagonists of early 18th Century English literature to write "to the moment." 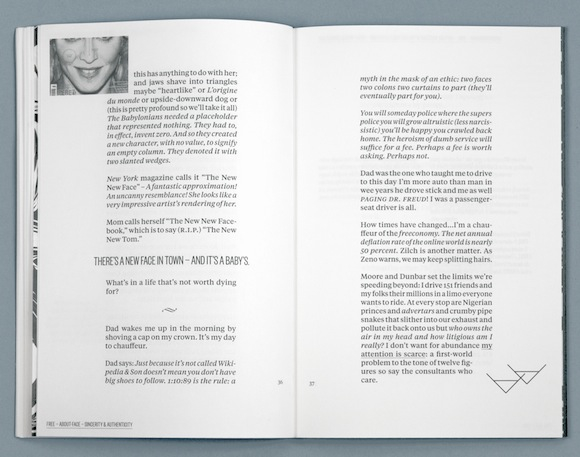 Our dual onus to be virtually present and continually "in the present tense" shares something with the conventions of this era, and while a blog or social media profile might offer the closest approximations to the found letter or diary, I'm interested in giving an extreme case study that still illuminates the norm. My content farmer is a known quantity: a member of the creative class in pursuit of the self-liberation and creative entrepreneurship promised by post-Fordist rhetoric, thereby willfully ensnaring himself in one of the many industrialized sectors of Internet work. He works "on the side" for a news conglomerate like Associated Content [Ed.—Now Yahoo! Voices], filing articles on half-hourly bases based on words peaking in Google Trends. A high quota of trending language, the wisdom goes, will trick the algorithm into awarding higher search rankings, yielding more "eyeballs" on the article—a standard metric of our online value.

In The Practice of Everyday Life, Michel de Certeau somewhat over-romantically theorized “la perruque," or the wig, as the worker’s own work being performed under the cover of employed time. Writing from the perspective of a content farmer thus became an exercise in claiming time and space in a field of production structured by quotas of language. Given that we rarely register strict delineations of personal and waged computer work, I envisaged the spans between buzzwords as spaces to disclose the character's inner life through anecdotes, speculations, anxieties, rants and the bits and bobs of cultural matter that periodically seed our individual content farms. The method is provisional—and the cultural analysis sometimes cripplingly pessimistic—but there's also a belief in the book about the literary possibilities for the programmatic and vernacular languages of the Internet. 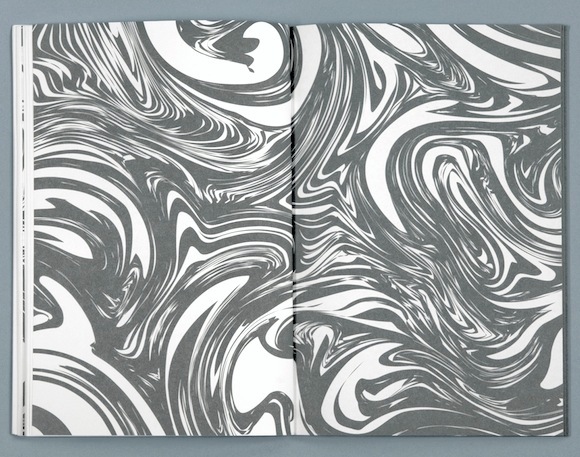 In the coming weeks, Coburn will perform at e-shelter, Berlin, in collaboration with Archive Kabinett; Volta, London, in collaboration with South London Gallery; Grazer Kunstverein; CAC Vilnius; and Museo Villa Croce, Genoa, as part of Peep-Hole's The Book Society. Copies of I’m that angel are available at bookstores and institutions worldwide.