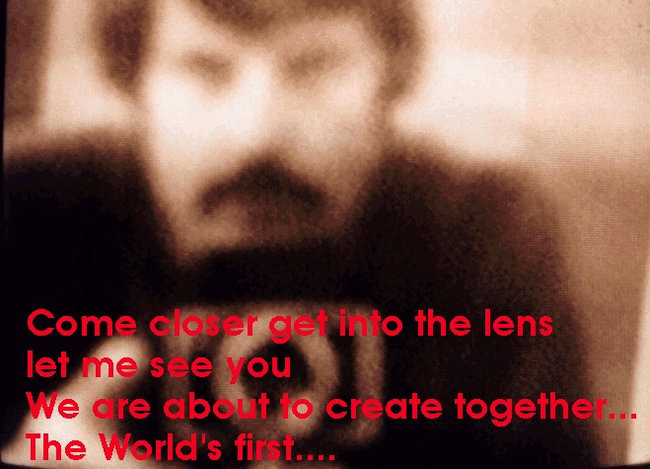 Many of the comments posted to the article offered sage advice for the conservation team, free of charge. According to Francesco of New York, “it was probably build in java or php and they need to update the server.” VJBortolot of Guildford, CT, expressed surprise “that the Whitney didn't … use an legacy browser … and run it in a Win95 environment on a vintage computer.” E.W. Chesterton of Palm Beach simply wrote, “Oh please! It’s html!”

Expert diagnoses notwithstanding, it’s well worth delving a bit further into some of the complex issues that emerged during the Davis restoration. Rhizome’s Digital Conservator Ben Fino-Radin acted as consultant on the project, working closely with curator and art historian Christiane Paul to lead and advise on a group effort by Whitney staff from multiple departments. Their work involved not only updating servers and running legacy browsers on vintage computer systems, but also considering theoretical and ethical aspects of the conservation, conducting interviews with the original programmer to document what the lost software did, writing the new code for the work, addressing a host of thorny technical issues and documenting the results. In short, the project is an excellent case study of the issues involved with digital conservation—issues that Rhizome has been wrestling with as part of its digital conservation efforts over more than ten years.

First, a bit of background on the artwork. Prior to Collaborative Sentence, Douglas Davis had a long-standing interest in broadcast technology. In particular, he is remembered for co-creating a 1977 satellite broadcast from Documenta 6, along with Joseph Beuys and Nam Jun Paik. Davis was interested in television’s ability to connect people across distance; my students always laugh uncomfortably at the 70s touchy-feeliness of his video work. With the emergence of the Web, his utopian belief in the possibility of intimacy through communications networks continued.

The huge difference between broadcast TV and the Web is the keyboard. With that people can say anything; they have full expressive capacity. This means a more intense and personal link could occur between me and the audience. So why not get the whole world together to write a sentence?[1]

Commissioned for the Center for Long Distance Art and Culture at Lehman College Art Gallery, Davis’ project allowed visitors to add to a growing online text. Visitors could enter words and links, but they could not use the period key; the sentence would go on forever.

The work showed as part of the first Gwangju Biennale in 1995, in a new media pavilion dedicated to Paik, where a number of visitors contributed text using a Korean character set. For many of them, this would have been their first experience of the Web, their first opportunity to write something that could potentially be read by an audience anywhere in the world. In thinking about Collaborative Sentence today, it is important to keep that sense of initial excitement about the Web—now already a distant memory—in mind.

The experience of this work today, then, is already radically different. But beyond this contextual shift, the Whitney had to contend with several serious technical problems. In particular, the CGI script that allowed visitors to input text to the site had been lost; it had to be reconstructed based on information gleaned during the aforementioned interviews with the original programmer.

Another problem was that none of the Hangul text entered by Korean visitors to the site was legible. At some point during the lifespan of the artwork, the Korean text sustained a form of encoding damage. It appeared as gibberish: “éÒ ‚ì¹¹ÀË Ëœ«å çÛ‚àçÛËí.”

Ben worked on restoring the original Hangul text as part of his work for the Whitney. He reached out to Ken Lunde, a specialist in information processing for East Asian languages, who suggested the text likely originated in Windows 1252 character set, but had been translated into Mac OS Roman characters. Ben and Lunde speculate that, at some point in the work’s history, someone opened the Collaborative Sentence in a Web browser that was running the wrong character set. They copied this incorrectly rendered text, and somehow saved this flawed version, rather than the original byte values, for posterity.

This was complicated by the fact that Hangul requires a double-byte character set (DBCS). Unlike Latin alphabets, in which each character represents a single letter and can be rendered with a single byte of data, Hangul characters can represent a combination of letters that form a syllable. Thus, the number of possible characters is far more numerous, and two bytes of data are required to display a single character.

When the Korean characters were converted, combination of bytes were changed. In his initial analysis, Lunde pointed out that the two bytes “0xBC” and “0x96” in the surviving Davis data had originally been “0xBA” and “0xF1”, which translate to the Korean character for rain: 비.

To restore the original text, Ben constructed a correspondence table from the original character set to Mac OS Roman, then reversed it. However, some characters present in Mac OS Roman set have no equivalent in Windows-1252. Therefore, the resulting text had missing parts. (For a more full account of his process, see this Github page).

In the artwork's object file, the Whitney Museum had saved a small amount of the text from a two-page printout with the Hangul characters correctly rendered, which Ben was able to use as a guide. The text derived from the printout included the text, 광주비엔낱레여, which Google translates as "Gwangju Biennale open." His conversion, though, gave the same characters as 광주비엔뿯뇫여, which Google translates as "Guangzhou Biel ppwot nyokyeo."

The results were illegible even to native Korean speakers, and the Whitney “invites contributions via GitHub to make the Korean text legible for the first time.” Ben describes this as a "sword in the stone;" restoring the original text may be impossible.

This is really just scratching the surface of the efforts that went into the restoration of The World’s First Collaborative Sentence, but it hopefully is clear from this brief investigation that even a seemingly simple technology-based artwork can go very, very wrong when it is not properly cared for, or when parts of the work are not collected at all (an awareness of which informs all of our own collections care practices here at Rhizome).

Despite the clear potential for conservation problems, I want to end with a reassuring note and a call to action for current and future collectors of digital art. Many of the problems that arose with Collaborative Sentence would have been avoided if best practices for digital conservation (as they are understood today) had existed at the time. Collecting technology-based artwork does have its perils, but digital conservation is no longer a dark art. Here at Rhizome, we aim to continue to let the light shine.