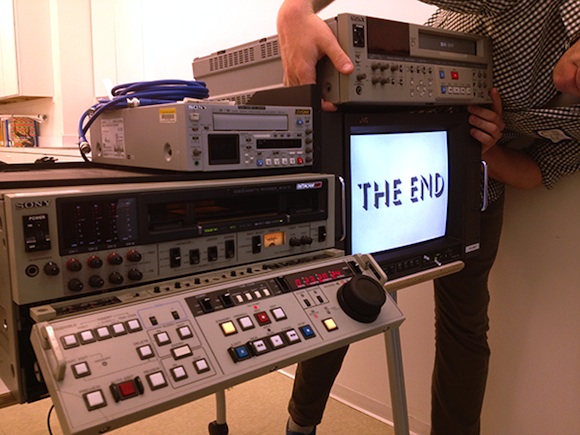 Today marks the opening of XFR STN, an exhibition collaboration between Rhizome and the New Museum that takes the form of a publicly-accessible media conservation center. Artists are invited to transfer materials from a variety of media formats for conservation; appointments may be requested online.

As the New Museum website explains, the exhibition "initially arose from the need to preserve the Monday/Wednesday/Friday Video Club distribution project. MWF was a co-op 'store' of the artists' group Colab (Collaborative Projects, Inc.), directed by Alan Moore and Michael Carter from 1986–2000, which showed and sold artists' and independent films and videos on VHS at consumer prices." Moore proposed XFR STN as a project that would deal not only with the MWF archives, but with the wider problem of the obsolete media forms found in artists' archives. Thus, as exhibition curator Johanna Burton writes, he conceived of XFR STN as "an artistic project as well as a public service."

In addition to digitizing a portion of MWF Video Club’s collection (currently housed in a storage unit in Staten Island), the XFR STN will be used to preserve various materials from the New Museum’s own rich archive (including video formats such as U-matic and VHS tapes), as well as any artist-originated moving image or born-digital materials whose formats have become obsolete. The exhibition/lab will operate publicly, and material that is transferred will be exhibited informally. Materials transferred during the project—all videotapes, and born-digital materials at the artist's discretion—will be made available online through archive.org, an internet library whose mission is "free and open access to the entire world's knowledge."

XFR STN runs through September 18, 2013 at the New Museum, 235 Bowery New York. It is a project by Alan W. Moore with Taylor Moore, Alexis Bhagat, and the artists of Collaborative Projects, supported by the Solo Foundation. It is organized by Johanna Burton, Keith Haring Director and Curator of Education and Public Engagement, with Ben Fino-Radin, Digital Conservator, Rhizome; Tara Hart, Digital Archivist, New Museum; and Jen Song, Associate Director of Education, New Museum.