There is a scene in the movie Airplane! (1980) in which a young boy suddenly recognizes the real-life actor who is playing the character of co-pilot Roger Murdoch. "Wait a minute!" he exclaims. "I know you! You're Kareem Abdul-Jabbar!"

The scene breaks the "fourth wall" to comic effect. Most viewers in 1980 would have recognized Abdul-Jabbar instantly, but the conventions of performance dictate that we try to pretend that he is just an ordinary schmoe in the cockpit. By "recognizing" Abdul-Jabbar, the boy calls attention to these conventions, and breaks the tension for viewers who were probably struggling to see the six-time MVP of the NBA as an airline employee.

Such an acknowledgment is missing from a more recent project involving Abdul-Jabbar, Miranda July's We Think Alone. Many of you will have opened your inbox yesterday to find an email from July containing emails from the Sent Folder of some fairly notable people—artists, a philosopher, fashion designers, film people and, of course, the long-time Lakers center. Such emails will be sent weekly until November 11; the first week's email is on the subject of money, something rarely talked about in public. We learn that Lena Dunham considered buying the much-coveted $20,000 Liljevalch sofa, while Sheila Heti worked as a temp. We also get a glimpse into individual writing styles: Abdul-Jabbar writes in complete sentences, Danh Vo is flirtatious when talking business and Dunham uses a smiley emoticon when saying "no."

July points out that the way we use email is changing. Certainly, it is not the same as it was a few years ago. From 2000 to 2003, Eva and Franco Mattes made the contents of their computer (including their email) public as part of the project Life Sharing (included in the Rhizome Artbase). Looking back at one of the screenshots from the project, there is a hint that network connectivity was not so ubiquitous then as it is today ("we are still offline from our office"), not to mention the advertising content at the bottom of an email from a seemingly tech-savvy user ("Win a 5-star getaway to exotic Bali!) 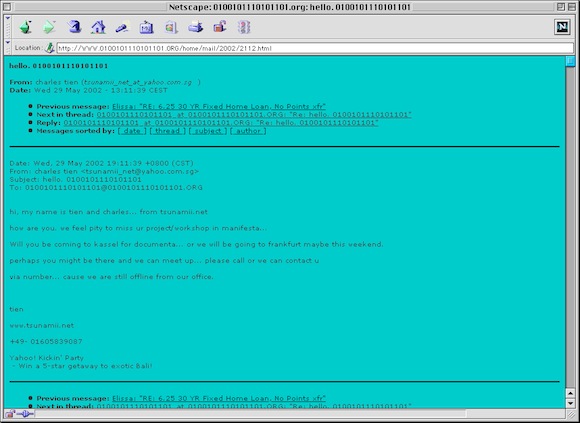 We Think Alone is a time capsule of a moment just before the revelations of the NSA PRISM program. We often write emails that are only meant for a specific audience, a specific context. This is what gives the emails in July's project their particular charge: they allow us to see how these notable people perform their identity for the benefit of friends, collaborators and employees - not for us.

A useful concept here is contextual integrity, as defined by Helen Nissenbaum. Like the participants in July's project, we all perform multiple selves as we move through our day, staging slightly different facets of ourselves at work, at the bar, at home, on our password-protected Hentai Tumblrs; contextual integrity is the ability to keep these facets of our identities separate. This is what is shattered when a photograph from the time we danced on a table at our high school reunion is made visible to work colleagues via Facebook, or when government agencies archive our communications. In the future, it seems likely that email users will become increasingly aware that all email must be treated as public information, that it no longer has contextual integrity. The sense of intimacy attached to the emails from We Think Alone will likely be lost, or at least changed irrevocably.

In her description of the work, July writes of her interest the intimacy of email. "I’m always trying to get my friends to forward me emails they’ve sent to other people – to their mom, their boyfriend, their agent – the more mundane the better." This interest builds on a past work (in collaboration with Harrell Fletcher), Learning to Love You More (2002-2009, included in the Rhizome Artbase). For this work, July and Fletcher solicited responses to certain tasks from members of the public; the results were displayed online. Participants were asked to share mundane elements of their private lives, such as photographs of the space under their bed.

In contrast with this earlier work, We Think Alone brings together contributions from people of considerable note, and because of this, the emails published on it can hardly be said to be mundane. It's difficult to know what to make of this shift from participation by the masses to participation by an elite few, and the interesting part of the project—a consideration of how we "perform" identity on email—seems overshadowed by the less interesting premise that "Stars Are Just Like Us!" In the end, talking about We Think Alone as if it is about how we communicate over email would be like saying that Tilda Swinton's project The Maybe (in which she stretches out in a display case in a gallery and lies in repose for hours) is about how we sleep. Both projects are very much about celebrity; only the latter manages to thematize this.

So in reply to yesterday's email, I would like to say this: "I know you! You're Kareem Abdul-Jabbar!"