The People Code
By Brian Droitcour 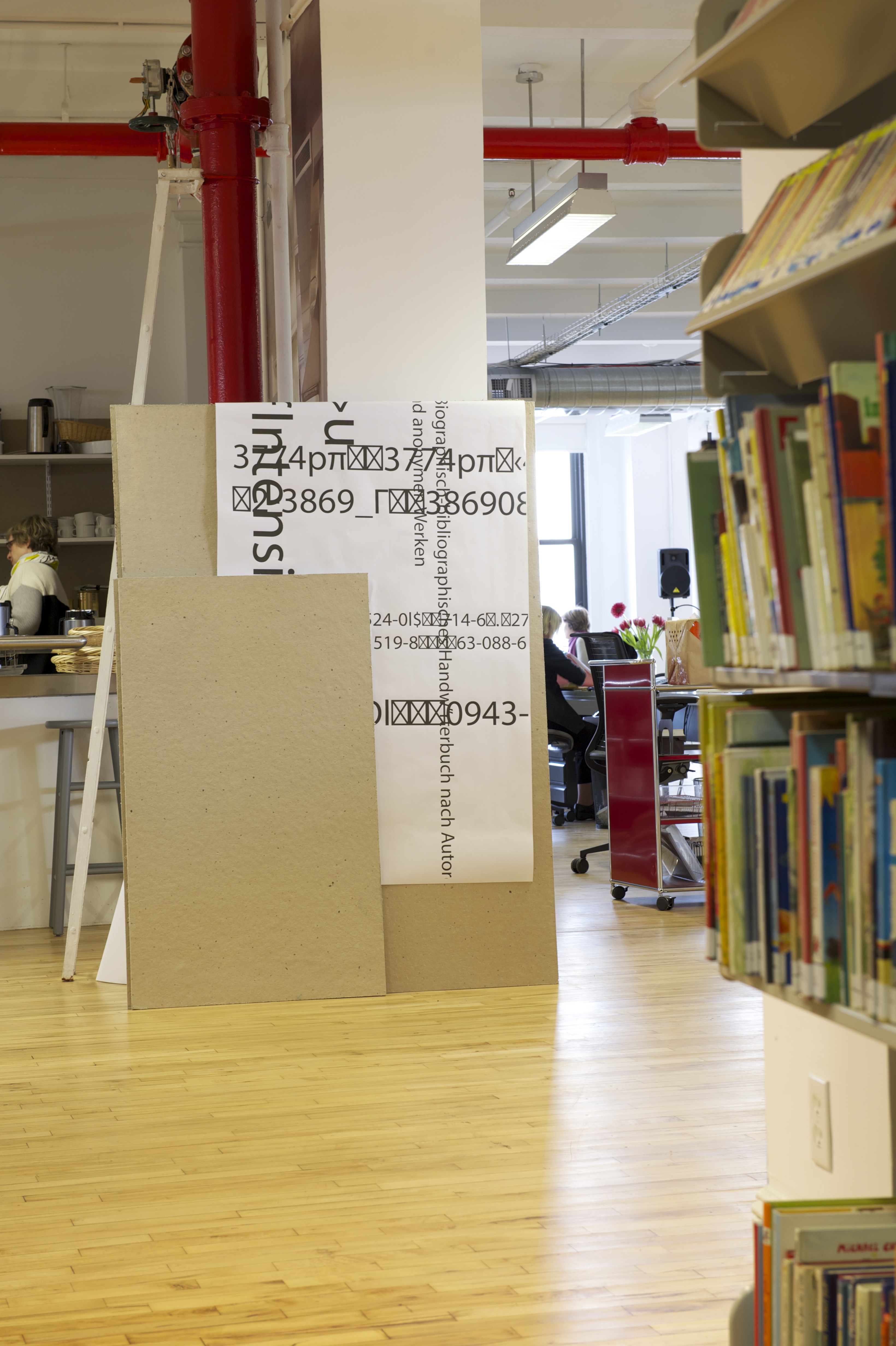 Installation view of pΓσ₠§§℩η⅁ at the Goethe-Institut Library. Photo courtesy of Jenny Jaskey

The mission of the library could be described as calibrating the optimal ratio of signal to noise, by eliminating as much noise as possible. This description would cover both shushing and the extensive cataloguing that eases readers’ paths to the information they want. But what becomes of that mission when so many people carry a gateway to vast expanses of knowledge in their pockets (even if they mainly use that gateway to take selfies and play Angry Birds)? Does the library of bricks, mortar, and bound books effectively bracket the search for information by offering a specific set of physical resources, with a corresponding language of signals? Or is it yet another backdrop for selfies and Angry Birds—the constant noise of everyday life?

This fall the Goethe-Institut Library, an outpost of the German cultural ministry in SoHo, enlisted curator Jenny Jaskey to organize “The End(s) of the Library,” a year-long series of artists projects that rethink the library’s mission. common room redesigned the floor plan to open up space and introduced a modular exhibition apparatus; David Horvitz established an electronic archive of artists’ books—both scanned works on paper and ebooks—to supplement the Goethe-Institut Library’s catalogs both here and in Europe. The latest project is pΓσ₠§§℩η⅁, a collaboration by Juliete Aranda, Fia Backstrom, and R. Lyon that directly tackles questions of signals and noise. They began by processing the library’s raw database through Safari 5.0.5 and printing out the results, in which catalog entries are cluttered and stretched by symbols and glyphs—representations of the metadata that the computer needs to process catalog entries. A reading was held on January 5 where participants vocalized the print-outs, glyph by glyph, pausing for the expanses of spaces. Now large versions of the prints hang from common room’s partitions—a noisy counterpart to the black-and-white wallpaper, the pattern of which details the Dewey Decimal system. Two monitors along the wall—at a glance indistinguishable from the catalog computers—show fuzzy screenshot videos of keyword searches highlighting the terms “Kafka” and “Hitler.” (The end[s] of German culture?) At some point there will be a live performance by noise band Wretched Worst, but the artists aren’t disclosing the time. They don’t want to attract fans who can process noise as a genre; as with the January 5 reading, the point is to create a temporary anti-library, where raw information estranges human minds that struggle and fail to parse it. Wretched Worst’s waves of sound will disturb random readers as they vibrate the books in the stacks.

But the heart of pΓσ₠§§℩η⅁ is Human Readable Type—a project that exists entirely outside the physical resources of the Goethe-Institute Library. It’s a free application that transforms Roman letters into roughly similar glyphs as you type. The results are noise to machines and signals—albeit staticky ones—to humans. Human Readable Type is represented in the library by a diptych of prints: on the left hangs a love letter, on the right—a list of the trigger words that attract the attention NSA’s Echelon program, which supposedly scans all emails for potential security threats. The pairing suggests a clandestine romance, where the lovers use Human Readable Type to stay invisible to surveillance. Love and other affects are a kind of non-information, equally opaque to a search algorithm or cataloging system as the words broken up into glyphs, yet viscerally experienced by humans (if not always easily communicated). If readers come to a library searching for, say, Kafka or Hitler, that affective non-information is what they’re really after. Perhaps that’s the benefit of bringing artists into the library: They make good reminders that the most powerful connections involve signal and noise in equal measure.

pΓσ₠§§℩η⅁ is on view at the Goethe-Institut Library through February 15.