A Tour of the AC-1 Transatlantic Submarine Cable (2011)

Your videos seem to borrow aspects from narrative filmmaking, the documentary format, amateur travelogues, and even at times experimental cinema. What genre(s) of filmmaking do you see yourself following or challenging?

Well, I don’t really see my videos as being film. One time I tweeted that as an artist I would never let my video work get transferred to film because too much would be lost. It was a joke, but I’m also serious. I mean, it’s hard not to be suspicious of a discipline that has a genre called “experimental.”

From the perspective of how the work is displayed, I feel my videos are not for the cinema. The movie theater flattens space and immobilizes the viewer. I like that people have to stand in a gallery, that they enter and leave the video at random times.

This is quite hypothetical, however, because in practice, most of my work is viewed online, where the artist has even less control.

In your videos you pull images and clips from a variety of sources including Google Street View, web-based image searches, and your own self-shot footage. Your videos range from twenty to thirty minutes in length. How do you structure this footage with the essays that make up your screenplay? How long does it take you to finish a video?

For Christmas my sister gave me an image from a brain scan she took of a human hippocampus, the part of the brain responsible for short- and long-term memory and spatial navigation. The hippocampus looks like a sea horse and its etymology reflects this. The functions of the hippocampus intrigue me.

During the making of A Tour of the AC-1 Transatlantic Submarine Cable I researched each location extensively. In many of the places, I felt I was not making new pictures, but reproducing ones that already existed. At the other end of the process, in the editing room, I could sometimes not differentiate between “original” and poached images. The internet has changed our relationships to space and memory. Thanks to the Borgesian online mapping projects, we can have memories of places we have never been. This is not new in itself, just more prevalent.

Each piece takes about a year. After that I forget everything.

From 2008-2010 you organized Private Circulation, a monthly PDF bulletin distributed via e-mail. Could you describe this project and how it relates to your artistic practice?

Private Circulation gave me a chance to work with a handful of great artists and editors. My current work would simply not be possible without it.

Similarly, you’ve long maintained a practice creating static objects, which may seem distinct from your videos that are heavily steeped in text. Are your objects equally influenced by topical research? How do your sculptural and documentary-based practices interrelate?

In 2010, I moved to Sunset Park and rented a studio on 36th Street. A couple blocks south at Bush Terminal there was an old apple orchard growing in toxic soil. I spent nine months sanding and painting store-bought apples as they rotted beneath the layers of One-Shot sign painter’s enamel, forming complex glossy folds.

The circumstances that lead up to a work are meaningful. I’ve found that sculpture is largely opaque to its circumstances of production. For instance, I have to tell you about the toxic orchard. If you want a periphery to be part of the work, it must come from outside (viz., a conversation, press release, or wall text). I want to make self-sufficient works—ones that do not require external descriptions. With video I feel I can branch out and include aural and visual images, even sculptures and architectural spaces. I think these recent pieces are sculpture-based documentaries.

Your new video, Field Visits for Bradley Manning, is the third in a series of videos exploring the physicality of the internet, following Views of a Former Verizon Building (2013) and A Tour of the AC-1 Transatlantic Submarine Cable (2011). Could you describe this new project, and how it builds upon your research in the preceding videos in this series? How many videos will complete this series?

I think this will be the last in the series. But one never knows.

Field Visits for Bradley Manning is currently a Kickstarter project and 1.16gb of research. The plan is to visit Kuwait, Virginia, Kansas, and Maryland and to make a travelogue based on the areas surrounding Manning’s geo-detention sites.

Building out from the associations developed in the previous videos, I’m focusing on the history of fingerprinting, concepts of citizenship, several archeological sites at the delta of the Tigris and Euphrates rivers, the buffalo soldier, and the National Cryptographic Museum, among other things. I am hoping to also focus on pearl divers, as this was the foundation of Kuwait’s economy before oil. I was pleasantly surprised when I realized that all three videos have pearls in them.

The piece will culminate in a video and an e-book for Klaus Gallery. 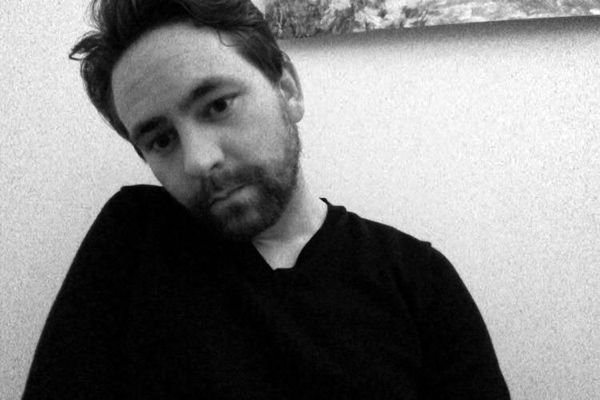 I bought my first computer in 2004. It was a white MacBook. The money came from an inheritance from my grandfather, a craftsman, who used to make some of his own tools.

I went to Cornish, a small art school on the West Coast where painters studied Abstract Expressionism. I remember on the first day, we were put into groups and asked questions such as, “Do you feel women are treated equally to men?” I was the only male in the group and the only one who believed men and women were not treated equally. This shocks me still.

I think this is a false distinction. Rather, you have to ask if the medium fits the idea.

No, my artistic practice is my main focus.

Manual labor and repetition held a significant place in my earlier works, such as Exodus (2004), a sculpture where I cast over 100,000 letters and punctuation marks in plaster. I often think of New York City as a labor camp, and am inspired by the oppressive conditions here. But normal day jobs have ceased to interest me. La perruque!

Not really. Although I enjoy helping other people with their projects. My projects also require help from other people.

No. But I like the idea of actively studying art history.

Again, I like the idea of it. I read criticism and theory maybe once a month. But I can’t say that it inspires me.

I prefer not to.