The Body as an Object of Interference: Q+A with Jeff Kolar
By Maura Lucking 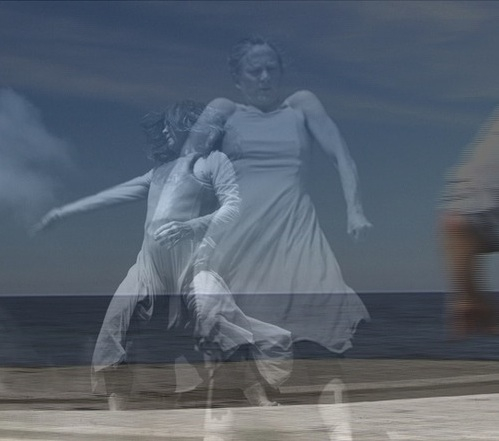 Dancers often describe the feeling of watching someone else’s performance and actually feeling, in their own bodies, the form and movement of the other. This sensation of inhabiting another’s body in a relative physical way is called proprioception and it does have a basis in neurological fact, which reports that some can access this bodily empathy innately while others, especially in kinesthetic disciplines like dancing or music, develop a sensitivity to it over time. But can a non-human entity like, say, an osprey or a radio frequency be considered proprioceptively knowable?

Jennifer Monson’s upcoming performance at The Kitchen, Live Dancing Archive, plays with this idea, asking if dance can function as a continuously generating archive of bodily experience. The piece, her first in a theater setting in years and by far the longest of her choreographed works, revisits one of her own earlier projects as source material.  A dance-based environmental research trip across Atlantic bird migration routes, BIRD BRAIN Osprey Migration (2002) aimed to collect environmental data through tracing the physical route of the birds from the North Atlantic to South America. This new work, in turn, uses video documentation of the dancers on that tour, Monson included, as the archival data to be embodied and brought to light in her performance.

While this might appear to point to a highly personal and, perhaps, political interpretation of the archival impulse – i.e. to advocate for a specific kind of environmental knowing through an artistic research practice – Monson’s collaborative development of Live Dancing Archive points to an interest in a more open and fluid definition of the concept.  The piece was developed collaboratively over the course of the last year and a half by Monson, video artist Robin Vachal (who recorded the initial documentation of the 2002 project), lighting designer Joe Levasseur, and audio artist Jeff Kolar.  In its final incarnation, the work exists as the simultaneous performance of Monson, Levasseur, and Kolar, all of whom will be physically present on stage, a video installation that will be on view on The Kitchen’s stage during days of performance, and a digital archive of video footage and ephemera from the BIRD BRAIN project that will go live on the day of the performance’s premier.

The project’s composer, Jeff Kolar, agreed to answer a few questions about the audio component of the performance, an “indeterminate score… generated through live field experiments in the AM/FM, shortwave, Citizens, and unlicensed spectrum (27 MHz or 49 MHz band).”[1] 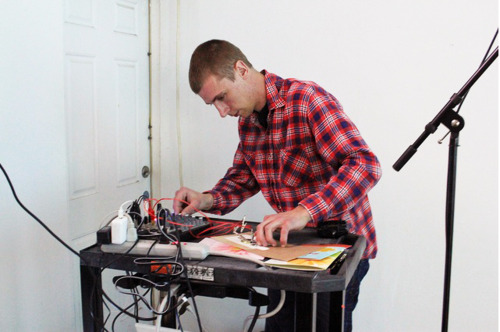 Can you explain a bit about your composition and performance process?  Have you scored dance or performance in the past? I understand that you’ll be onstage with Jennifer and that, like her dance practice, any number of environmental variables can impact the aural product of that particular performance.

In 2011, I produced a project called Start Up / Shut Down , which focuses on Window and Macintosh operating system event sounds. I spent a great deal of time examining the strict durational formatting and other standards found in the one-to-four second event sound. The result was two five-minute tracks that act as a set of hand-made alternatives to proprietary operating system sounds.

Following that, I created The Wilhelm Scream (2012), a work that explores the iconic three-second cinematic sound effect “The Wilhelm Scream”. The piece explored the scream’s origins, usage, and cult status as well as the character conversations and ambient sounds that immediately precede and follow the sound effect. And my most recent release, Ringtones (2012) is a set of operative ring tones produced specifically for use by mobile devices. The ring tones, released for iPhone and Android, range from four-to-forty-seconds in duration. The work is situated as functional audio objects that can be installed on wireless cellular phones for everyday use.

The audio material in Live Dancing Archive is generated live through field experiments in the AM/FM, Shortwave, Citizens, and Unlicensed radio spectrums. The instrument arrangement of hand-built radio transmitters and receivers respond directly to external weather phenomena, wireless technology systems, and human activity. The radios were specifically designed as low-powered and battery-controlled to create a sensitive, interference-proned sonic landscape.

What about the project drew you to using exclusively analog technologies, in comparison to the rest of your practice, which is more cross-platform?  Is there actually an anti-archival quality to employing the sounds broadcast on radio frequencies that, at least in theory, aren’t as easy to replicate or record?

For this particular project, the instrument arrangement is entirely analog; a chain of handmade radio transmitters and receivers that respond directly to the specific site of transmission. The work explores a diverse range of licensed and unlicensed electromagnetic frequencies that are affected by peripheral analog and digital wireless systems that surround the performance venue.

I view radio as an inherently ephemeral medium. A landscape that is operating in and experienced by the complexities of real-time. There is a long tradition of using radio as indeterminate musical instruments (i.e. musique concrète, John Cage, Luc Ferrari, etc.). Pre-dating the use of broadcast delays, radio's history is that of a "live" technological media. A sonic landscape that is always on and omnipresent.

This notion of radio as real-time experience was a large factor in my developing Radius, an experimental radio broadcast platform that focuses on supporting radio work via the event of live radio broadcast. Radius intentionally does not have a real-time internet stream. Instead, the platform exists to represent sound and radio art on the radio, in the spectrum, in real-time.

As a medium that is so specific to the time and place of the listener, it seemed like an appropriate choice to use analog radio in Live Dancing Archive. I've developed a score that is flexible enough to change based on time, place and external interferences, but specific enough to relate directly to the compositional elements found in the dance movement. I am constantly negotiating the desire for a fixed composition while also dealing with the indeterminate nature of live radio. I do record every performance of Live Dancing Archive, but have yet to reuse any of that material. I am much more interested in the real-time execution of the work than the documentation of it.

In Hal Foster’s analysis of the archival impulse as it has appeared in contemporary practice, the tactile and personal figuration of the archive is directly at odds with the technological one from which it’s language is drawn.[2]  He writes that they “are recalcitrantly material, fragmentary rather than fungible, and as such they call out for human interpretation, not machinic reprocessing.”[3] What’s your take on this human-technological binary in the framework of a performance like this one?  Could you talk a bit about the impact of physical human bodies and their movements as they are tracked through your own performance?

I view radio as a medium that is intensely linked to the human body. Radio is often considered a disembodied media that focuses entirely on the transmission of the human voice and refuses the bodies of senders and receivers. This notion of a uni- or mono-directional radio system references a very corporate use of the radio spectrum. A viewpoint that focuses on the desire for maximum signal strength to obtain more potential listeners, which equates to higher potential advertising revenue. This is often found specifically in FM music stations and AM talk radio.

I would argue that radio is inherently linked to the specific sites of transmission and reception, and the interaction of bodies to architecture, the environment, and other technological equipment. In that way, I view that the body as an object of interference; a physical thing that can alter electromagnetic waves. The archival implications found in the Live Dancing Archive project are as much about real-time as it is about the preserved or documented time. The audiences that experience the live performances become part of that archive.

My work with the electromagnetic spectrum acts as a physical environment for dance to live and be performed within; a systems of physical relations (waves) that alter and open the inaudible spaces that surround us. In that way, Live Dancing Archive documents indeterminate ecological systems, and reveals a deep relationship among technological, ecological, and human environments. The audience in attendance, Jennifer's body, my proximity to the radio equipment quite literally affect the sonic output from the radios. The score is comprised of sensitive systems of social and tele-communcation relations. In that way, every performance is a learning experience for me: a site-specific event filled with transmission accidents, wireless feedback, and physical interferences.

[1] From The Kitchen’s press release. (http://thekitchen.org/mig/files/FY13/WinterSpring/PR/PR_MONSON.pdf)