Traveling Through Layers: Yuri Pattison and his Leakers
By Laura Davidson 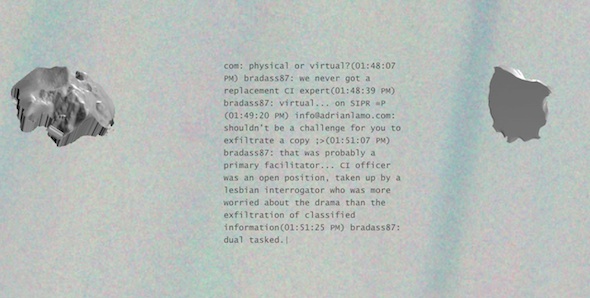 When one scrolls through the project, the site slips between real-time chat logs addressing the '91 plot, purportedly culled from the eponymous RELCOM (a Russian networking apparatus that predates the modern internet), IRC communiqués from that same year relating to the first Gulf War, and Jabber chats between hacker Adrian Lamo and one "bradass87," AKA Chelsea Manning, Snowden's forerunner in whistleblowing. (The piece will evolve, with new content and texts, over the course of its run.) RELiable COMmunication could be considered a historiographic effort; its non-linear narrative merges past, present, and future into one textured mass, a transhistorical portrait of the leaker and his or her event. Accompanying you through the archival layers are small, rotating 3D models of the Chelyabinsk Oblast meteorite—another event that restructured our sense of history, but in this case via an object that exists outside any human's timespan. (The meteorite also appears in another form scattered through Pattison's Instagram account.)

Adding a further tantalizing layer to the wide-ranging cultural references marshalled in the project, the press release for RELiable COMmunication begins with an explanation of the Inuktitut word for the internet, ikiaqqivik, which translates into English as "traveling through layers." The text links to a 2006 journal article that not only gives great insight into the research behind RELiable COMmunication—it also will appeal to anyone with an interest in articulating time, narrative, and history in digital culture.

Yuri Pattison's RELiable COMmunication, a new work commissioned by London-based Legion TV, is online until the end of May 2014.