The latest in an ongoing series of themed collections of creative projects assembled by Prosthetic Knowledge. This edition brings together projects that make use of the Oculus Rift, a device that has reignited interest in Virtual Reality and provided creative inspiration for hackers and artists alike. 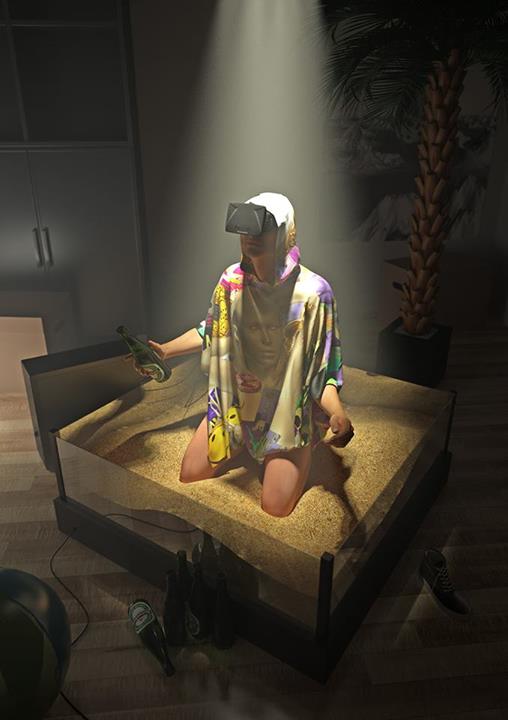 Every year, there is usually at least one piece of technology that stands out, that captures the attention of engineers and creatives, that inspires new ideas and makes new experiences possible. At various times in the past, you could have said this in relation to (for example) the Kinect, Arduino, 3D printing, the Processing programming language, or projection mapping software. This year, one piece of tech stood out, one which reinvigorated an idea from the 1980s and 1990s, making it exciting and within the reach of anyone with a computer or console: the Oculus Rift.

Released this year, the current model is intended for developers; the consumer-level version is planned to be available late 2014. It isn't the only device in the fields of virtual and augmented reality (others include the Sensics Smart Goggles, Cast AR, the Avegant Glyph, and of course Google Glass), but none of these have got into the hands of many creative developers. While the Rift is primarily being developed for video game experiences, it is interesting to note that many creative projects also utilize other gaming tech as well. For example, there is a programming plug-in for the Unity engine to help convert a 3D application developed on the platform to be easily Rift compatible, as well as experiments with attaching a Kinect sensor to the device.

In this submission, I will present a sampling of interesting Rift-related projects from both artists and engineers.
Entropy Wrangler

Artist Ian Cheng debuted the Oculus Rift version of his Entropy Wrangler piece at the Freize Art Fair in London this year. It is a chaotic virtual space in which the viewpoint of the participant can alter the dynamics of weightless 3D forms, generating their own narrative from the experience. Below is a screen capture of the piece and a Vine taken by Marina Galperina:

Ian Cheng discussed his thoughts on the future of storytelling in a recent roundtable in Frieze:

But now it's 2013, and there's the feeling that the straight story can no longer normalize the complex, unpredictable forces of reality that intrude with greater and greater frequency, let alone the incessant stream of big data reporting on these complexities. What is the intuitive story of climate change? Shifts in the market? Mutations in your brain? Your browsing history?

Specialists turn to non-intuitive technologies like quantitative analysis, simulation modelling and probability in order to trace narratives that account for the present and make predictive narrations of the near future. But for the rest of us, this kind of non-human storytelling is counterintuitive to our intuitive UX. We receive it, but we don't feel it, so we can't embody it. Anxiety takes hold when embodied narration fails.

The evolution of the narrative form necessitates mutating our intuitive ux for storytelling with a coefficient of persistent anxiety. Anxiety is a condition that cannot be eradicated, but can be managed. Is it possible to shift from a culture that wallows in anxiety towards the creation of narrative tools that contain and manage a bug of anxiety within them?

See more of Ian Cheng's work on his website.
PaperDude VR and CityTrip

Two projects separated by four months, both of which utilize the common bicycle. The first, PaperDude VR by Globacore, is an homage to the well known 8bit video game Paperboy, using a Kinect to pick up gestures for gameplay:

From the project page:

PaperDude VR is built in Unity with 3D assets created in 3D studio and textured in Photoshop. The KickR sensor detects the speed of the bike and has the ability to provide programatically controlled resistance. The KickR communicates speed and cadence through bluetooth to a nearby iPad which updates our app over OSC.

The Oculus Rift VR headset lets you look around your scene in a full 360 degrees and allows you to focus your newspaper aim. The Kinect controller tracks the positions of your hands and arms, and detects the paper-throwing gesture.

The second, CityTrip by FRONT404, uses the bike for the participant to travel through a virtual alien landscape:

With Citytrip you can explore a fantastical, alien city by riding a bike. By pedalling and steering you navigate through the virtual reality as if you are really there. Fly through the air by pedalling like a mad-man and hitting the ramps, or use the bicycle bell to jump from building to building. Explore the city on the ground or navigate the twisting aerial pathways and cycle along the top floors of skyscrapers. You set your own goals and create your own challenges, and fun!

The idea for this project came to us when we were playing with some of the projects other people had already made for the Oculus Rift. While the virtual reality of the Oculus Rift is very immersive, we noticed that moving around using a mouse and keyboard breaks down that immersion pretty quickly. The interaction and movement in the game world just doesn’t feel real, because you know you're not moving. We wanted to create a project in which this disconnect between your movement and the virtual reality wasn't an issue. After brainstorming for a bit we decided on using a bicycle as the way to interact with the world. A bicycle removes a lot of the disconnect of using a keyboard because it is a familiar way of moving for most people, making the interaction with the virtual world feel much more natural.

A Japanese hacker has developed this system attaching a Kinect sensor to the Oculus Rift to give a virtual character (in this case, virtual pop idol Hatsune Miku) a more realistic presence in the real world, in terms of "interaction" with and representation of the character. For example, it allows her to appear behind real objects, as seen in the last gif above.

TIMEFLY is an ongoing project by artist Kim Laughton that combines net art and fashion. The project employs a poncho-like garment for which other artists can compose designs, which Laughton composes into 3D images and physically constructs as well. Laughton created an interactive net art rails piece using Unity called Trip (which you can try for yourself here), but also managed to make it Rift-compatible (which you can download here).

For your enjoyment, though, here is a review of the piece from 7-year old Khalin:

The Entertainment is a play by Lem Doolittle that was written without any stage direction in order to invite open dramatic interpretation. Independent game developers Cardboard Computer have constructed a first-person version of the play, which can also be experienced through the Oculus Rift.
You can download the Oculus Rift version (as well as the normal single viewpoint version) at the project's webpage here.
Other Links:

Oculus Streetview Viewer: An online app that allows you to view any panoramic Streetview images, very much like the old-fashioned stereo viewers.

Riftenabled: A depository of Oculus Rift demos and projects available for all, including this Virtual Art Gallery app.

Guillotine Emulator: Developed as part of the Exile Game Jam, participants don the Rift and place themselves in a virtual guillotine and... you can imagine the rest.