Material that has been brought to the XFR STN open-access media conservation project is now beginning to appear online at the Internet Archive, and there are some real treasures. One of these is Human Vectors by Dov Jacobson, included on a 3/4" videotape brought to the XFR STN by Phil Sanders. The tape included a compilation of works itled EVTV2, originally shown at Sanders' art-and-technology focused East Village RYO Gallery in the early 1980s. The piece caught our eye because of its apparent use of a vector-based computer animation system (for more on vector graphics, see this recently published interview). Jacobson gave us some background on the piece via email. — Ed.

Human Vectors was created principally using the Vectrex—an absolutely unique home game machine that had a built-in calligraphic display. Calligraphic ('vector') display is a cathode-ray tube (CRT) technology that predates the traditional TV or monitor. In standard TVs, the ray methodically paints the full surface of the tube like a man mowing the lawn. It gets brighter and darker as pixels are lit up or not. In a calligraphic display, the ray traces the image out. It is great for line drawings, and terrible for fills. It has cute artifacts at the corners as it changes direction... By 1984, the Vectrex was a market failure and I bought a few for $50 each. 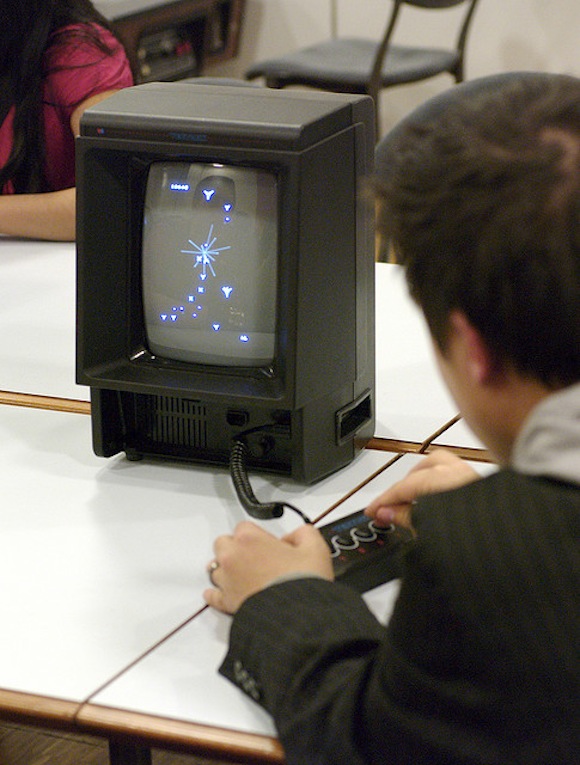 Other shots used the beautiful monochrome character display of the first IBM PC... 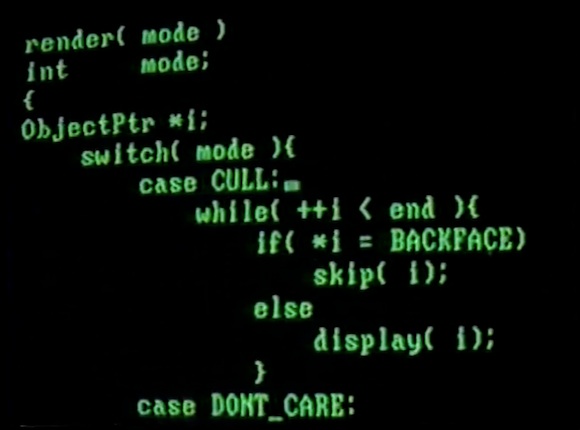 and the final shot employed an experimental color graphics card (TrueVision) with a 640 x 400 resolution and 8 bit pixels. Hot stuff at the time. 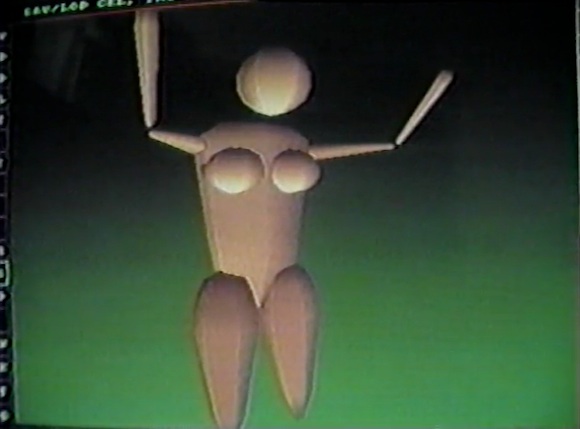 The video was recorded on VHS by pointing cheap video cameras at the displays. My favorite cameras had laggy, smeary sensors. These were black-and-white security cameras bought from bins on Canal Street.

The music in the video was by Soma Holiday, art-punk musicians who lived in what was then the disregarded neighborhood of Williamsburg in the ignored borough of Brooklyn. How disregarded? How ignored? Soma Holiday (A great French guy and his fine american girlfriend) squatted in the marble lobby of an abandoned bank.

In the days before YouTube, the only backdoor path to pop media was (forget community-access television) MTV's Basement Tapes. Homemade music videos (now we'd say Indie) were selected by Viacom and voted on by the the audience (using "900 number" technology.)

Human Vectors was selected for Basement Tapes. We told all our friends to watch and call, but few had cable TV. We watched from an apartment in Brooklyn where somebody had cable. The other contestants were all standard rock music and 80's Music Videos (fog machines, cars, babes). We won 5th place. Out of  5.

The video did get heavy rotation at the Palladium (not yet an NYU dorm) and the cokey club that was a converted church—Limelight? But it was principally shown at Phil & Joanna's seminal RYO gallery in the then-quite-dangerous East Village.

The video was made during the pioneering days of 3D computer imaging, and it references typical C code as well as seminal researchers such as James Foley and Andreis Van Dam. At the time, I was living in Staten Island with wife and baby, and working in the Time-Life Building on a completely different computer display system, as a game developer. (About this time, Mike Smith and I made what the New York Times declared "the first videogame as fine art," Mike Builds a Shelter, which also showed at the New Museum). 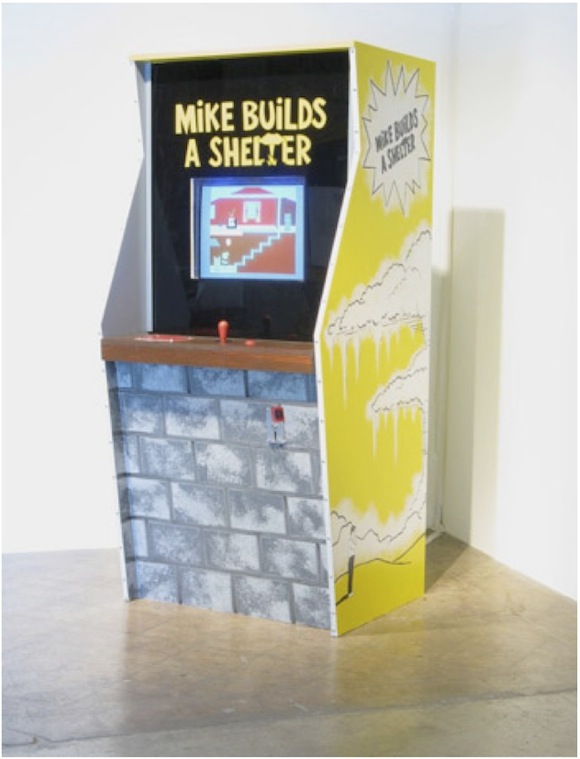 Bill Ferster (partner) and I provided the 3D software (coded in the video) to pioneering animators and artists; in 1987, we sold our company to a big software company. With the new resources available (five programming teams and seven figure budgets) I launched a project to reproduce the brilliant Vectrex AnimAction system. The happy result, "Nimble," was sold in France and Japan but very bad business deals and Japanese/American rivalry killed it dead (except in France and in my studio in Washington DC). The Vectrex interface, which Nimble imitated, was more immediate and usable than standard computer animation paradigms. 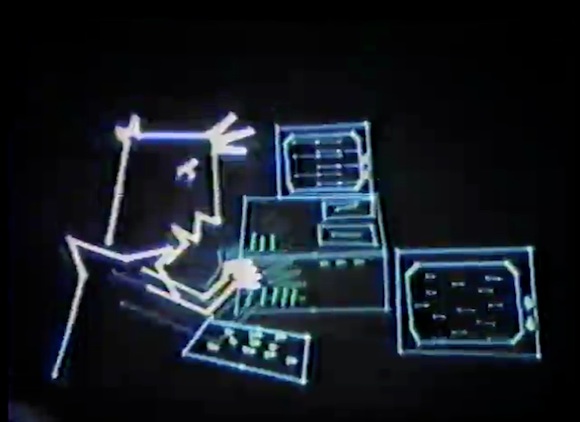 Since making Human Vectors, Dov Jacobson has made a large number of games: art, commercial, experimental, propaganda and learning, as well as a couple of videos. Now, he lives in Atlanta and is currently Managing Director for GamesThatWork. He can be reached at Dov [at] BigFun dot net.