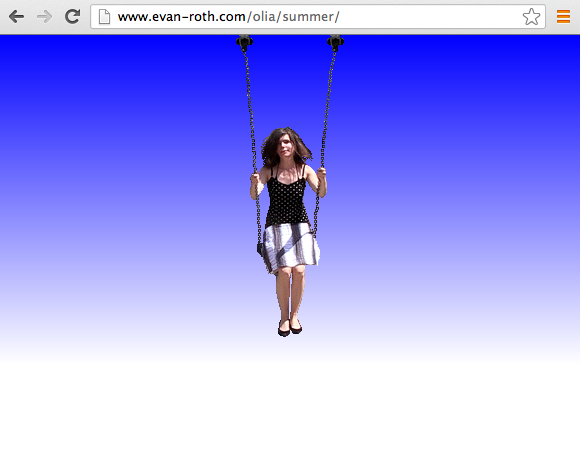 In a 2006 interview with Valeska Buehrer, artist Olia Lialina observed that her early web-based works, particularly My Boyfriend Came Back from the War, have been irrevocably changed by the accelerating speed of the internet.

Though the work is still as it was: same files, same address, links -- it is now more like a documentation of itself. Because everything else changed. First of all connection speed. I could now click through my work in one minute. Probably, I could do it even faster...if there is no delay in between phrases, no waiting for images, no Jpeg "progressive scan" loading -- the tenseness of the conversation is lost.

It wasn't that Lialina was inspired at the time by the creative possibilities of the slow-to-load early web (she recalls being as frustrated as any user); it was that the work functioned within a specific technological context. As the context has changed, so has the experience of the work.

Lialina's increasing awareness of the interplay between technological context and artwork is at the forefront of her latest work, Summer (2013). The piece is a short animated loop of the artist swinging from a playground swing that is seemingly fixed to the top of the browser window. When I loaded the animation, it played back quite jerkily, before finally freezing. This lack of smooth movement is a part of the piece: each frame of the animation is played back from a different website. The browser is re-directed from one server to the next, the speed and smoothness of the animation dependent on the functioning of the internet infrastructure that supports it. There are 21 frames in the piece, distributed across 21 different websites; at the time of writing, one of the host servers is not working. As Lialina told Jillian Steinhauer of Hyperallergic, "I like to swing on the location bar of the browser, and I like to know that the speed of swinging depends on the connection speed, and that you can’t watch this GIF offline."

In contrast with My Boyfriend Came Back from the War, in which changing technologies introduced unwanted changes in users' experience of the work, Summer foregrounds and thematizes the deeply intertwined relationship between artwork and technology. It reminds us that each time we view the work, we will experience it in a slightly different way, reflecting the shifting conditions of the network and our position within it.