Seven on Seven 2013
By Rhizome 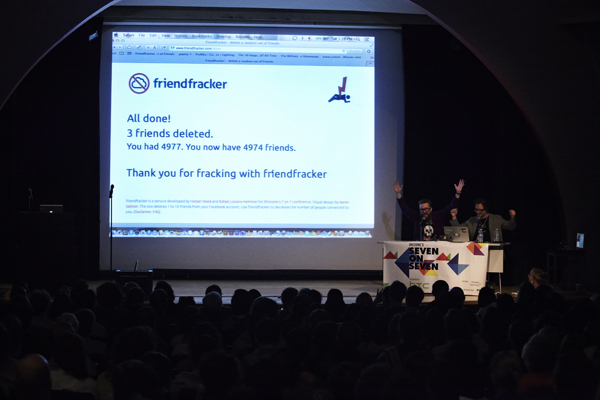 Presented by HTC, Seven on Seven 2013 took place April 20th at The New School's Tishman Auditorium. It was organized by Heather Corcoran, and was moderated by John Michael Boling. Read Michael Connor's report, Giampaolo Banconi's Liveblog (I and II) as well as articles from Creators Project, Art in America, and AQNB.

Evgeny Morozov is a writer and researcher from Belarus who studies political and social implications of technology. He has written for The New York Times, The Economist, The Wall Street Journal, Financial Times, London Review of Books, Times Literary Supplement, and other publications. He is the author of The Net Delusion: The Dark Side of Internet Freedom and To Save Everything, Click Here.

Alex Chung is founder and CEO of GIPHY. His latest startups include Artspace, a leading e-commerce destination for contemporary art, The Fridge, a private social network acquired by Google, and General Displays, a GE venture developing GE's next generation of HDTVs. He has also directed media technology for MTV, NBC, Comcast, Charter, and managed future technologies for Paul Allen's R&D lab. He was one of the early architects of interactive television and started his career as a hardware engineer at Intel. He was named on Business Insider's Top 25 most influential technologists in New York and has degrees in philosophy, electrical/computer engineering, and graphic design.

Paul Pfeiffer was born in Honolulu, Hawaii, but spent most of his childhood in the Philippines. He relocated to New York in 1990, where he attended Hunter College and the Whitney Independent Study Program. Pfeiffer’s groundbreaking work in video, sculpture, and photography uses recent computer technologies to dissect the role that mass media plays in shaping consciousness.

Jill Magid’s work is deeply ingrained in her lived experience, exploring and blurring the boundaries between art and life. Through her performance-based practice, Magid has initiated intimate relations with a number of organizations and structures of authority. She explores the emotional, philosophical and legal tensions between the individual and ‘protective’ institutions, such as intelligence agencies or the police. Her work is included the collections of the Whitney Museum of American Art, La Fundación Jumex, and the Walker Art Center, among others.

Dennis Crowley is the co-founder and Executive Chairman of Foursquare, the location intelligence company that powers products used by more than 50 million people every month across 100 countries. Previously, he founded Dodgeball, one of the first location-based mobile social services (acquired by Google in 2005) and help to build early location-based games PacManhattan (2004) and ConQwest (2004).

Dalton Caldwell is a technologist and digital music entrepreneur. He is the founder and Chief Executive Officer of Mixed Media Labs. He currently works as a partner at Y Combinator.

Fatima Al Qadiri is a Senegal-born, Kuwait-raised composer and conceptual artist, currently based in Brooklyn, New York. She is interested in exploring the experience of war, memory, Western perceptions of other cultures, and sociocultural identity through her work. She is a member of the group Future Brown.

Cameron Martin was born in Seattle, Washington and received his BA from Brown University. He continued his studies at the Whitney Independent Study Program in 1996. He lives and works in Brooklyn, NY. Martin has had numerous solo exhibitions, including: Bracket, Greenberg Van Doren Gallery, New York, NY (2011); Gallery Min Min in Tokyo (2008); Currents 97: Cameron Martin, at the St Louis Art Museum, St Louis, MO (2006). He has received awards including the John Simon Guggenheim Memorial Foundation Fellowship (2010), the Joan Mitchell Foundation Fellowship (2008), and the Artists at Giverny Fellowship and Residency in Giverny, France (2001). His work is in several museum collections, including the Albright-Knox Gallery, Buffalo, NY; Minneapolis Institute of Art, MN; Saint Louis Art Museum, MO; and The Whitney Museum of American Art, New York, NY.

Rafael Lozano-Hemmer is a Canadian-Mexican electronic artist, who develops interactive installations that are at the intersection of architecture and performance art. His main interest is in creating platforms for public participation, by perverting technologies such as robotics, computerized surveillance or telematic networks. Inspired by phantasmagoria, carnival, and animatronics, his light and shadow works are "anti-monuments for alien agency."

Harper Reed is an engineer who builds paradigm-shifting technology and leads others to do the same. He loves using the vastness of the Internet to bring people together, whether as CTO of Obama For America, CTO at Threadless.com, or on his own projects. Through the acquisition of Modest, Inc., he is helping to define the future of commerce at PayPal.

Matthew Ritchieʼs installations integrating painting, wall drawings, light boxes, performance, sculpture, and moving image are investigations into the complex and transient nature of information. His works describe generations of systems, ideas, and their subsequent interpretations in a kind of cerebral web, concretizing ephemeral and intangible theories of information and time. Ritchie has engaged in many cross-disciplinary collaborations, extending his own projects to explore the possibility of shared systems and aggregations in contexts as diverse as opera, contemporary music, architecture, horticulture, urban design, theology, and science.

Billy Chasen co-founded betaworks in 2007. At betaworks, Billy built several product prototypes, including Chartbeat, a real-time web analytics service that is today used by over 80% of US publishers. After betaworks, Billy co-founded stickybits, a way to attach digital information to physical objects and turntable.fm, a social music service where people could play music with each other online. Most recently Billy co-founded Ketchup, an idea incubator backed by Accel. Billy holds a BS in Computer Science from the University of Michigan.

Jeremy Bailey is a Toronto-based new media artist. Recent projects include the Stedelijk Museum in Amsterdam and Tate Liverpool. Recent exhibitions include solo exhibitions at Transmediale in Berlin, and group exhibitions at Mediamatic in Amsterdam, Museums Quartier in Vienna and Balice Hertling in Paris. Recent commissions include projects for FACT in Liverpool, Turner Contemporary in Margate UK, and The New Museum in New York. He is represented by Pari Nadimi Gallery in Toronto.

Julie Uhrman is a video game entrepreneur. She is founder and CEO of OUYA—an innovative gaming console that enables any developer to publish a console game by bringing the mobile app model to the TV. OUYA is a powerful, beautifully designed, open and inexpensive alternative to traditional game consoles. By combining a classic console format with the ease of access of open mobile SDKs, Julie seeks to make OUYA the open pathway for all developers—AAA and indie alike—to bring their craft to the world.