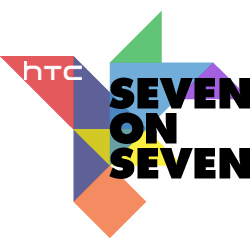 Hi, I'm Giampaolo Bianconi and I'll be liveblogging today's Seven on Seven conference. Check back throughout the day for realtime updates from the conference, as well as Tweets and thoughts from attendees, participants, and other Rhizome contributors.

About to start - best crowd ever! #7on7HTC event is why I moved to BayC #digitalgc

12:28: It begins! Heather Corcoran takes the stage to welcome everyone to the 4th annual Seven on Seven Conference. "Seven on Seven represents a chance to put critical contemporary artists with technologists whose ideas have tremendous reach ... We are not so naive as to think that art and technology are totally seperate realms."

12:34: This year's Seven on Seven is dedicated the memory of last year's participant Aaron Swartz. John Borthwick speaks to his memory. Here's his Image Atlas from last year.

12:37: Moderator John Michael Boling made his first website in 1994. It was about Muppets.

12:40: Keynote speaker Evgeny Morozov, on the other hand, never made a website about Muppets. "There is a tendency to think that my argument says technology doesn't matter -- it's not the message. The message, especially in my book that just came out, is that technology is very powerful."

Virtually anything can be preceded by "smart". Will Cisco do a better job in defining the word than, say, Robert Moses. #7on7HTC

12:44: "In the context of urban planning and city planning, we know that not all solutions are alike ... trying to understand how we can start differentiating between different technological solutions is very important. We need to go beyond the technophiles/technophobes discourse." -- Evgeny Morozov

12:51: "If we start bridging art history and the history of technology, we might see that ideas presented as solutionism today are not so new: they have histories ... beyond that, I think we need to find a way for artists to push technologists away from their tendency to think they know all the answers." -- Evgeny Morozov

12:58: "Finding ways to articulte why friction and conflict matter is something artists can do." -- Evgeny Morozov

1:05: Moderator John Michael Boling takes the stage to give some context to Seven on Seven: "Not a conference in the traditional sense, but more an experiment ... It can be kind of a wild ride." Participants met for the first time two nights ago and were given some loose guidelines: a day, eachother, and a deadline. "The main deliverable here is a conversation." First team Paul Pfeiffer and Alex Chung take the stage.

@jmb833 getting to the bottom of proper pronunciation of gif #7on7htc

1:21: Dancing Lana Del Rey in the bloody Shining hallway. "There's no way to explain this right now, we don't have the vocabulary." - Alex Chung

1:25: Evocation of shock and survivalist preparation in regard to the condensed image loop.

1:30: Trying to define the Loop Function drove Alex Chung and Paul Pfeiffer to hypnosis, with some help from Herzog's Heart of Glass.

1:38: Chung and Pfeiffer introduce GIPHNOSIS: reprogramming yourself using GIFs in your subconscious. "In a way GIPHNOSIS already exists: it's news media." - Pfeiffer. Chung and Pfeiffer's GIPHNOSIS is collection of downloadable screensavers to reprogram your mind. Two choices: Shelley Duvall with a knife or five surprisingly coordinated kitties.

"The image is becoming more powerful, but the looped image hasn't been defined yet." - Chung

1:44: John Michael Boling introduces Fatima Al Qadiri and Dalton Caldwell. Their dicussion centered around questions of "infobeisity"
and "data detox." How much digital information can one person process.

about to get ASMR in here #7on7HTC

#7on7htc” I think that information bomb of early 20th c was much more shocking than today' flow of emails and notifications..photo, film,

1:51: "How do we talk about the fact that a bottle of water wants to be your friend and give you updates?" - Dalton Caldwell

I gotta say, the soundtrack achieved the intended effect. All these update sounds, meditative as they are, make me really anxious. #7on7HTC

2:05: Al Qadiri ties things up by bringing it back to fact checking. Next up: lunch.

I'll be continuing the livestream here.