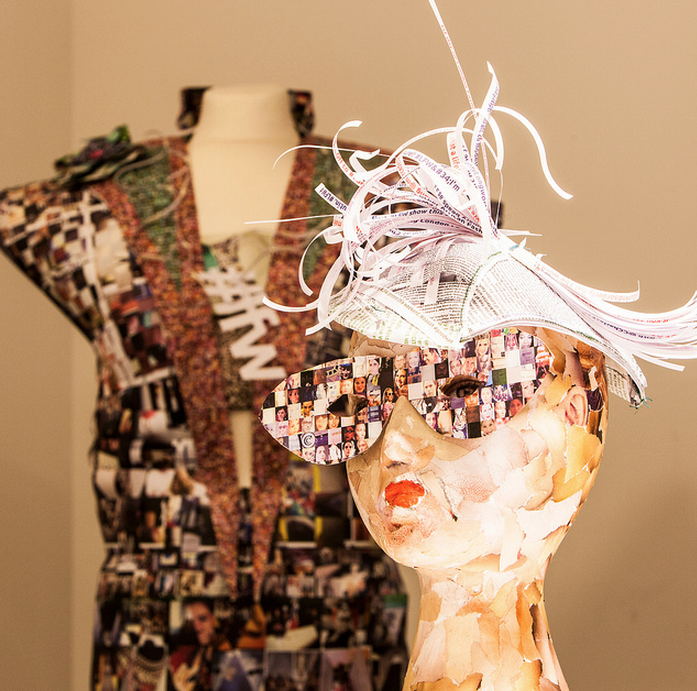 Recently, Digital Sizzle staged a data and art hackathon at Mozilla HQ in London.There were no rules – the only expectation was to share ideas and skills. The hackathon began with a handful of participants pitching ideas. The weekend’s aim was to make art but, its context also showcased developers as creative practitioners who are just as engaged in the process of making as artists are. In the end, two themes of opposing approaches defined the weekend: generating data vs. using data sets and material outcomes vs. screen based outcomes. Tonight a selection of the projects will be shown at Whitechapel Gallery.

From the developer side there appeared to be a certain desire to pursue a project that generated material objects as an outcome. One project wove together a paper dress printed from a live stream of Instagrams and Tweets sourced by a Python script searching for the #LFW (London Fashion Week) tag. The designer remarked that the process of weaving references the birth of programming in the textile looms of industrial revolution Britain. For the developers, the data dress was an attractive opportunity to make something physical. Wearable data was an outcome pursued by other participants over the weekend. Stef Lewandowski actively sought to go beyond a screen based outcome by crafting laser cut necklaces created from the visualization of Twitter sentiment analysis.

The most ambitious project of the hackathon called on live data from weather stations across the world, working towards re-creating far-flung weather locally. Using a garden pipe, fishpond pump and plastic roofing, the rain happening in New Delhi or Jakarta came down at Mozilla HQ, London. A socket using a netduino controllable by http requests powered the device. It was reminiscent of YoHa’s work Invisible Airs, which utilized data from Bristol Council to power pneumatic machines that re-imagined data in a physical space for the community to experience as an object.

Another team used tropical fish as an unstable data source. As the fish moved they created their own musical scale replayed back to the audience. The team remarked that using unstable data is an unusual concept in a development context and the hackathon was an opportunity to explore this. Fiona Chambers and her team spent the weekend gathering data from the detritus of the Internet: spam. Chambers also collected banal Instagram images, upon which nonsensical phrases from spam were layered. Her intention is to hand them out as flyers at the Whitechapel. This project took spam at its most distasteful and read it aloud over a 1970’s porn soundtrack. By using Twilio visitors to the gallery will be able to call a hotline and hear spam being read back to them. Additionally, Max Povey decided to generate his own spam by creating a ‘bespoke’ recommendation service (inspired by ‘Amazon recommends’…) to Tweet absurd personal suggestions to visitors listed as attending the gallery event.

As the weekend came to a close, the divide between developers and artists was only made tangible by the different wristbands given to either group. Despite the artists having an initial anxiety that a lack of coding knowledge would inhibit their ability to collaborate on a technical level, their creative skills were abundant in re-imagining the spaces in which data usually resides. The developers had the chance to create ambitious projects without the pressure of making sure everything works perfectly for a client. The hackathon was for many a starting point in establishing new working relationships, which will continue to generate thought provoking work beyond the weekend.

For the full list of projects see: Hacker League and @digital_sizzle.