An Interview with Superlative TV
By Morgan Quaintance 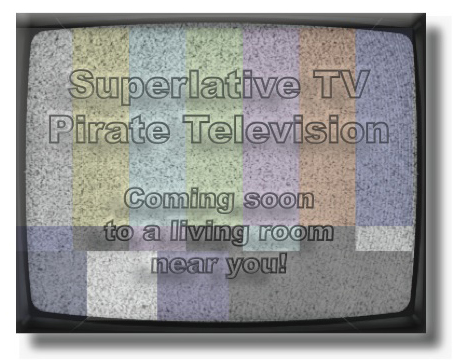 Against this backdrop of retrospection and nostalgia the politicised London-based pirate television group Superlative TV formed. Set to begin broadcasting the evening of September 14, Superlative TV will be available to anyone in the city who can unplug a TV digital receiver and tune into the yet to be designated frequency. Inclusive, liberal, and egalitarian, the channel will run a program consisting of community led documentaries, artists’ works, performance, news, and film. Tackling subjects like the 2011 London riots – civil unrest that saw unprecedented looting, arson, and violence in the city – Superlative TV are distancing themselves from the post-modern tendencies of contemporaries like south London’s Auto Italia South East and Lucky PDF. In other words, it is not all about VHS generation loss and ironic distance. Instead Superlative TV seek to offer a politically active model of public access television: an enfranchising, free television service in dialogue with its users, as opposed to a paid for service that is not. Recently I spoke with Superlative TV co-founder Anne Tennor about the upcoming broadcast.

How did Superlative TV start and why?

I think it started because we saw a need. Not that there isn’t a lot of “art TV” out there, because there is a lot, but art TV seems to have almost become about a brand. A brand in which an individual’s voice might get lost in the crowd. So what we're facilitating is a kind of open platform that is missing from British broadcasting in general, and the idea is to fill the gap of open access television as well as produce art TV.

We have a background working with lots of artists in London, doing various projects with moving image and broadcasting whether that is radio or television. Then the digital switchover happened and it just seemed like the perfect time to subvert an old medium that people aren’t using anymore. We see it as a redundant space that can be completely free, completely uncensored, completely unrestricted. Not even the Internet can provide that opportunity, for artists especially. But if you look at last summer’s riots the government was trying to shut Twitter down. So we’re still being controlled, in spite of the idea that we use modern technology to have a voice.

It’s interesting that you’re talking about issues of control; because what you are doing you have to do covertly as it’s illegal.

We’re hoping through our activity we’ll eventually not be seen as criminals, but as people offering something which should be made legal. Eventually the idea is to have an open access television station in the UK as there isn’t one, but it’s happening all over the world now, of course in America, but also in parts of Eastern Europe you’ve got artists who are offered half an hour on a local channel. That said, open access isn’t the extent of what we plan to program. We’d like to commission relevant programs that national TV doesn’t seem to cover. Also, given the current political situation in the UK, there’s a feeling that some parts of society are being targeted by Conservative policies and not being given a voice at all.  So this goes beyond just offering young artists, or people with nowhere to show work, a space.

I was thinking about the fact that it’s on analogue television, which means people will have to detune their sets to watch. First of all you’re getting an active and engaged audience, because their making a big effort to find out what we’re broadcasting; and second it’s like time travelling, which is how it feels in the UK at the moment. I just think that a lot of what’s happening has happened twenty, thirty years ago with Margaret Thatcher, and even before that. Things seem to go in cycles and it would be nice to offer some hope.

So can you tell me a bit about where you’re at with the project at the moment?

Well you’ve come towards the end of phase two. Phase one has been collecting content, practising camerawork, assembling equipment, and we’re ready to go live. We’ve been trying to collect shows together, and ideas for formats. We have a show that we’re advertising now, which is called Prime Time: we’re asking artists and curators to submit three videos to us, one that they’ve made, one they have influenced and one that has influenced them. We’ll screen those after we’ve launched piratically on the 14September.

We’ve also been filming and documenting events for the last year: working with PAMI (Peckham Artists Moving Image festival), and a radio show on Resonance FM called The Gravy.  They have a great bunch of weird and wonderful musical acts, that we filmed and put our live mixing over, and we have a whole catalogue of them now. We’re also commissioning new works with artists, so a lot of great young talent is going to be shown via our channel. On top of that we’re working on more documentary style content about the political situation now.

I want to talk to you about how this project speaks to, lets say, video art, new media history, and the history of artists working with television.  Were those things in your mind when you were building the project from the ground up?

I mean we’re definitely interested in tactical media, and artists like Ubermorgen who have done major public interventions that have gone far beyond the art world. But I suppose the difference with a lot of those politicised interventions is that it’s through modern technology on the Internet, which came to a bit of a cooling stage in the mid 2000s. What we’re doing is a bit different because rather than intervening in something that people aren’t aware an artist is behind, we’re asking people to actively be involved.

Television seemed to always be cast as the twentieth century villain, as the culture industry’s primary tool for twisting reality into a simulacrum of itself. So it’s interesting to think of it being used as a medium for the dissemination of material unmediated, and unfiltered through the corporate sieve.

I was just thinking about Black Audio Film Collective, their film Handsworth Songs, and how important that still is today. They were essentially a group of young, disenchanted youth that wanted to talk about things from a perspective they felt lacked a voice. It’s a shame, but it feels like the same situation is happening now and coming together is maybe the best way to go against it. Also I was thinking about the history of TV, and how it used to be that maybe there’d only be one television on the street. So it was kind of an event to watch television right? You’d have all your neighbours coming around to that one house, lucky enough to have a TV, and it became a communal activity, creating a sense of community around that event. Hopefully something similar will happen here. Because of the lengths people will have to go to view, maybe something different will come out of it.

So how can people get involved with Superlative TV?

We have a website at www.superlativetv.com, and a blog at www.superlativetv.tumblr.com, that’s one way people can keep up to date with what we’re doing. But what we’re really encouraging people to do is email us on antenna@superlativetv.com with any ideas they have for broadcasting. We want to help people to make programs; we have the equipment, we’ve got the monitors, we’ve got the cameras. We want to help people to find their voice on the medium of television.  So give us an email. If you’ve got any kind of film, or even something that already exists that you want to show, we’re more then happy to have a look and put it on the channel.

Is this an international call?

Of course! The more the merrier.

interesting parallels to the US State Department's "shadow" internet project (aimed at providing foreign dissidents with the components of a mesh network, to evade the inherent choke-points that exist: fiber-optic backbones, traffic-exchanges, data-centers, etc)

i almost wonder if you could apply for funding/sponsorship.

but how are you going to get around the fact that all of these newly available wavelengths will soon be auctioned and owned by private industries, mobile companies and etc? i imagine they will be quite ruthless in enforcing that ownership.

but in the meantime, i love the idea of people reinvesting in analog networks. maybe in the long term it will develop into your own version of the mesh. good luck!