Gallery in Your Pocket: An Interview with Chiara Passa
By Maura Lucking

Widget Art Gallery, developed and curated by Chiara Passa, is an exhibition space that fits in your pocket. This digital gallery is an app for iPhones and iPads. Over email, I asked Passa several questions about the project: 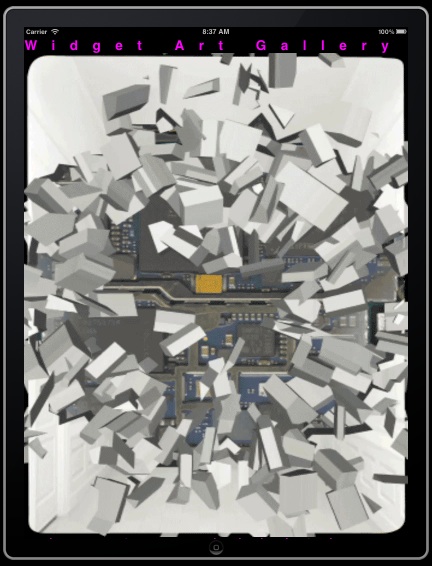 What was your motivation behind starting the Widget Art Gallery?

Different reasons led me to start the Widget Art Gallery.

The first one is that I’ve always wanted to do my own curatorial digital art project in relation to a space.

The second reason is the economic crisis. So, it was unreasonable for me to rent an exposition space since it was too binding, and three years ago I decided to create a virtual display space that Id thought extremely coherent in order to show digital art; simple to manage for me and easy to understand for users. Due to our needs that seem to be increasingly handheld, WAG was born. The Widget Art Gallery is a mini three-D, single art gallery room that fits into people’s pocket.

The virtual gallery-room, every month, directly on people’s mobile, hosts a solo digital art exhibition related to the dynamic site-specific contest. So the WAG works both as a sort of kunsthall showing temporary exhibitions and as a permanent collection museum because it conserves all the past exhibitions inside an online archive.

The third aim is a conceptual and emotional one. Recently, I was surprised by the increasing involvement of the audience that I am seeing in some recent mobile-art projects, so I wanted to create a virtual space accessible to everybody by simply using an internet connection. The Widget Art Gallery is a free Safari Mobile Web-based App and works online through two different links for IPhone and IPad. It’s also possible to download the widget version for mac-osx dashboard.

The fourth motivation is a technical one. I’ve built the WAG within the HTML5 programming language and JavaScript functions; therefore it’s simpler to manage and to make some modifications each time there is an update and to switch to the next exhibition, without depending by Apple Store and their decisions/upgrades.

Do you think that bringing the online exhibition to a mobile platform brings it closer to the initial experience of the modern gallery show — i.e. trying to have a private interaction with a work of art in a very public place?

I think a new era is approaching also for contemporary galleries and the way to exhibit/curate.

The mobile-show adds a plus valorem: it introduces the possibility to appreciate the artwork in relation to space in a private mode.

The Widget Art Gallery is often a strange experience, a place where people are meant to have a private interaction within the artwork but could are also surrounded by crowds... in any case, the WAG has both the possibility to be a collective and/or an individual environment that users can manage how they want and where they need, compared to the physical static gallery where people have only the possibility to share the space and the exhibition at the same time.

For a long time, the art system held the monopoly on curated, publicly accessible art. But the internet gave them a run for their money with web-specific online galleries that re-imagine the nature of the gallery and the exhibition, and turn websites into curatorial spaces for commissioning and showcasing new artworks, making their business easier.

Recently I’ve noticed how some galleries prefer to start to shape their own virtual art gallery for the mobile platforms instead of a simple website. Also visiting Apple Store, I’ve seen some other newly established mobile projects like for example, myk art an IPhone App for collectors and Fifth Wall, which is an App designed for IPad considering the digital tablet as a new performance space.

You write that you find WAG to be a more interactive and participatory platform for audience engagement than your other projects.  How so?

Maybe because the WAG is a mobile art-project and the audience easily can access the show every time via internet, without any constrictions. A physical artwork (even if it is also a digital creation), like for example an interactive video installation in real space, needs a different participatory approach from the audience because the real space has a predominant role in relation to many time-based artwork’s aspects, as opposite to an artwork performing inside a mobile platform, into a limited space, for example. The good stuff is that there are more people seeing a mobile-show, rather than people actually going to see a gallery exhibition.

The virtual artwork inside the Widget Art Gallery has neither an inside nor an outside; it is not private, but it is public; it can no longer be only autobiographical, but mostly social. This last peculiarity characterizes and distinguishes it from the traditionally visual arts before the advent of the internet. 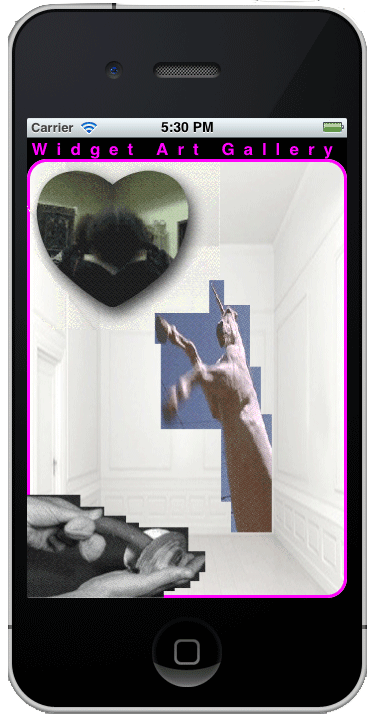 The possibilities of interaction regarding the time-based art in relation to the new spaces as the mobile platforms like the WAG, grows up following the development of digital technologies, so the contemporary viewer is forced to make a sort of training (like the participant does playing video games) to understand and enjoy the interactive art that is transmitted very quickly.

The time-based art inside the mobile platforms, even if born with the intent to bypass the art system and arrive more easily to the public by eliminating the so-called intermediaries, and also thanks to the use of Internet, continues to manifest itself as a paradoxically subcultural practice, always borderline but parallel to the art system, because, unfortunately, it’s enjoyed only by those having the technical specifications and the know-how to understand it at all.

How does the curatorial process of designing and running WAG figure into your own digital art practice? 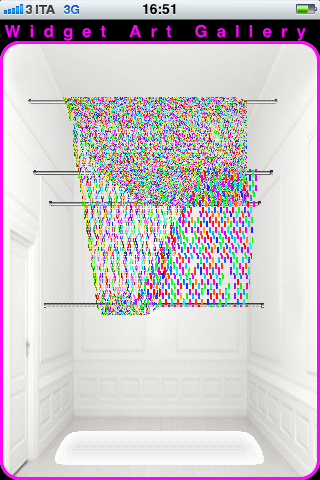 My artwork in general combines different media by default. I run animations and video installations, interactive projects on internet-art, digital art in public space, site-specific artworks as projects of video mapping and, as well as, development for mobile platforms like smartphone and tablet. So, I’ve different skills to perform several software and some programming languages I learned since I was just a student until now. The WAG’s interior design I created is inspired by a pure/minimal room of a ninth-century’s building, from which I took a picture of a real empty room. I consider the physical view/frame I’ve used and figures inside the digital device help people understand and contextualize better the digital artwork inside the mobile space. This is not a paradox in showing digital art but in this way the environment provides a reference space, a sort of coordinates for eyes. Besides, the real setting picture establishes an illusory axis between the real and the virtual during the show. The physical image as background sometimes could change depending on the exhibition proposed by the artist.

Can you talk a bit about what you think makes GIFs so successful in this format and what you hope to see in the future in the gallery?

The Gif format is a great success in art across-the-board. Because of its multifunctional and switchable nature between video, photo and a simple static image, Gif gives artists many possibilities of expression/communication.

Related to WAG, the idea is that the Gif format is very easy to construct by artists and it’s simple for me to figure out when I program the WAG’s exhibition.

I’ve built the WAG in order to also host interactive projects i.e. Java artworks, but this point depends on the artist and what he/she wants to exhibit. Furthermore I hope to display also music/audio projects, video, and Augmented Reality shows.

Je Suis Ici by Francoise Gamma is on view until Oct 30. The gallery's next exhibition will include work by Haruko Hirukawa.