A collection of items from the Prosthetic Knowledge Tumblr archive and around the web, looking at a Fine Art archetype today.

Uncomposed (after Titian after Giorgione) by Georgie Roxby Smith

Uncomposed (after Titian after Giorgione) from Georgie Roxby Smith on Vimeo.

Made specifically for Composite at Gallery One Three Uncomposed (after Titian after Giogione) deconstructs Giorgione’s Sleeping Venus, itself a composite, the landscape and sky being completed by Titian following Giogione’s death in 1510. The work was a landmark of its era, reflecting a new shift in modern art with the inclusion of a female nude at its centre. Employing three-dimensional computer graphics and elements of Giorgione’s original masterpiece, Roxby Smith replaces his stylised renaissance figure with a fantasised digital body transplanted into an augmented hyper real landscape. In the likeness of her present day artist, the 21st Century Venus will not lie still for her voyeurs, obstinately returning the male gaze from her new digital paradigm, Sleeping Venus awakes.

Framed digital art piece is a 3D animation of a sleeping female nude subject in the classical pose of Venus / Odalisque - a two minute example of the twenty minute work:

"Machina" (2008) by Claudia Hart from bitforms gallery on Vimeo.

“Machina” is a 3D animation portraying the compressed time and space of painting, shows a dreaming character whose slow, drowsy movements articulate all of the minutia of a single moment. “Machina” uses the most advanced techniques of virtual reality simulation, and a series of animations that result in a representation that is sensual and organic. Occasionally, Machina opens her eyes to gaze at the viewer, in a moment of transformation, allowing the object of our gaze to subject us to hers. Based loosely on works such as Titian′s Venus and paintings by the Baroque artist Peter Paul Rubens, “Machina” is meant to introduce sensuality into the virtual realm by employing an idea of beauty as defined by a woman.

Love Is All by Alejandro Gómez-Arias

While the Odalisque / Venus is a serious genre in Art, it has been said to also be a circumnavigational way to provide fantasy and titillation to patrons. In this piece, we have the first known example of pornography developed with the Kinect camera. It is surprising that (to the best of my knowledge) the technology has not been used to create pieces to explore the human form, so for better or worse this is the only known example to date. The video was uploaded two weeks ago, but has since been removed. Here are some animated GIFs of the piece:

Eye-tracking Fine Art: Odalisque a la culotte grise (Matisse), and the proposal of the “opsieme” 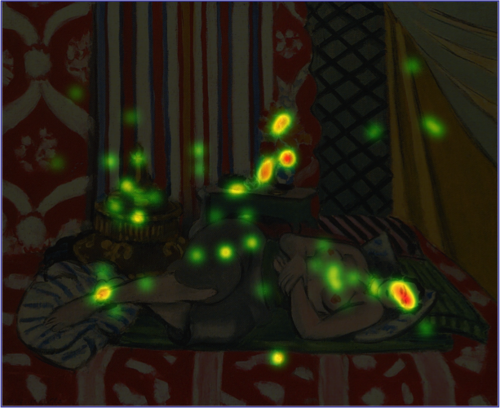 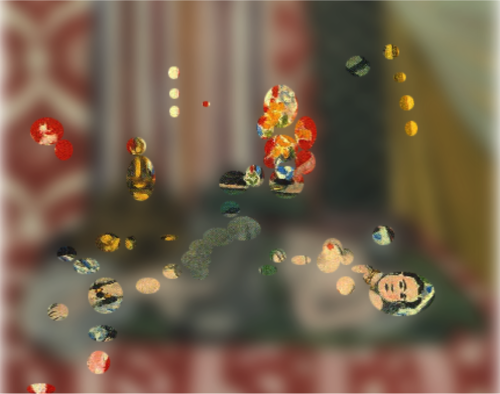 Jean Paul Courchia proposes the idea of the “opsieme”, a visual unit equivalent to the ‘phoneme’ and ‘graphemes’ used to deconstruct sounds and text:

According to cognitive neuroscientist Stanislas Dehaene, recognizing letters and their combinations — called graphemes — and then creating an interface between what’s written and what’s articulated (phonological awareness) is the way to gain access to the lexicon that we use to communicate. If we indeed pay attention to the basic elements that compose the written sentence, we find letters, syllables and words. However, the smallest significant element of the sentence is probably the grapheme, since the whole understanding process derives from it. The grapheme is the written equivalent of the oral phoneme. It is comprised of the smallest group of letters making a phoneme. For example, in French, the phoneme [o] has several graphemes : o, au, and eau. Unlike a letter, a grapheme represents better the phonology of a language, or what a language sounds like. The French language counts 130 graphemes.

Does this same concept apply to a painting or an image ? Just like in the reading process, the image undergoes several mutations between the retina and the sensory areas of the cerebral cortex, whereby the basic components of the image (forms, colors, orientation of the lines) are dissected first and then transmitted to the visual areas. It is only then that the image is reconstructed, and that it will be confronted against other known representations that are stored in our memory for an identification of the present image. Dismantling, reassembly and identification are the three steps in the process of the visual representation, whether artistic or natural …

You can read the whole piece here | PK Link

uncomposed: pixelation, clouds, blinking, the background and the foreground of a painting by "big george" and/or titian: red fabric with golden trim in a checkered pattern, a tree stump, a complex of thatched buildings in the distance (a stables? an inn? the gateway of a village?) all of these structures being tucked under a looming structure of half-ruined masonry, columns and arches with grass growing at the tops of them (a roman auditorium?) and the woman is a substitution and the sky and the pixels and the sounds have all been added; and i wonder about the original woman sleeping in a gallery in dresden when the lights go-out, and i wonder if titian meant to transform her into big-george's tombstone, perhaps by adding that tree stump, and i think about the old peasant tradition of simply burying folks in the orchard where the ground will not be tilled, dreaming of adam and of christ cursing the tree that would not bear fruit, and i wonder about those buildings and the pixelation and what sky specifically (does it matter if it were an american sky, or australian, or south american or european, or if it had been filmed through the window of a jet-liner?) and i think about the woman blinking with her breasts bobbing and her wooden fingers waving, and most of what i feel is sadness. i see an etruscan lady leaning on top of a tomb, with a slightly vacant smile; i see the isabella stewart gardner museum with its terrible lighting and its founder being carried around in ten feet of gauze in an antique litter; i see a post-card of sleeping beauty, as a musical on ice, and i see a time square peep show, also as a post-card and as a musical; i see the sky, i see myself blinking, i see clouds like pixels and paintings like peep shows and theories and and criticism and attributions and substitutions and traces of roads and tree-stumps and human beings.


machina: shadows of hands, the shadows of her neck; the sudden directness of her gaze, which then turns away, either accepting our presence or dismissing our significance; which reminds me of the invention of morel, and of the fugitive. but we now inhabit the epoch of funes the memorious, which will culminate in an apocalypsis of the lungs (and all this time when we should have been shouting, or chanting sutras, or at least humming to ourselves like a mother trying to put its child to sleep)


love is all: sex at the surface, dissolving our purpose (here we are, in this "age of the machine", still trying to teach ourselves and each other how to be human) and the bit-mapped courtesans and the murderous king of kings in 1001 nights; obelisk and the veil of stars, real and apparent brightness, tremendous distances that are gradually revealed by systematic observation, powers of magnification, transits of venus, etc. flesh of my own flesh rendered unto euclid and osiris and reddit. there is a statue of an aging, roman prostitute, who is carrying a basket of fish, on her way to celebrate her patron god, dionysius. she is going to meet her god– the woman in amsterdam who sits inside a red-lamp window, looking tired in the morning and sipping her tea, is sometimes going to go to meet her god– perhaps in a dream or a metaphor or in some dodge at tradition, or perhaps in the fullness of time, beyond what we now understand to be true about ourselves. 1001 binary, number nine dream.


opsieme: how are particular and distinct opsiemes /graphemes / phonemes combined in the brain's lateralized structure to produce qualities of experience "–at the level of language"?; if we can have the visual equivalent of a sound and a word, can visual experience also have a "connective grammar"?; will the movement of the eye shift to a predetermined pattern on a given set of opsiemes, once it has "recognized" a "known object" corresponding (more or less) to a known word?; pursuing the theory that schizophrenia is a mis-function of language in which the lateralized structures of the brain are moving out of sync, would the visual patterns and experience of a schizophrenic subject display a similar and related manner of "out-of-sync-ness"?