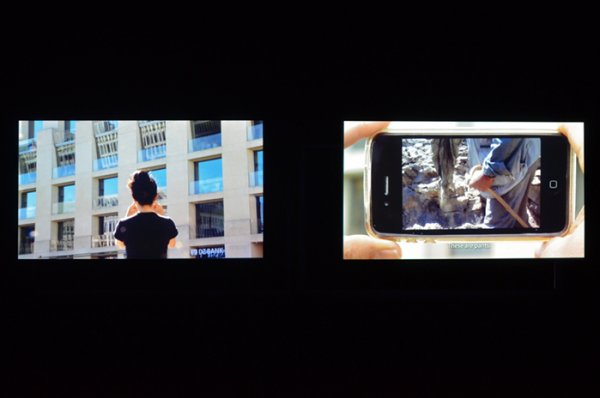 Abstract, one of three pieces in Hito Steyerl's solo exhibition at e-flux, shows the artist's visit to the deathplace of a friend. As an eyewitness plainly recounts the evening slaughter, he points out the remains of Andrea Wolf and some 40 other insurgents shot dead by the Turkish Army in Kurdistan. On the adjacent screen, Steyerl shoots the facades of German monuments with her phone. Doing so exposes the material origin for the killing (Turkey is a second market for German arms) and connects the languages of cinema with combat (the shot > countershot; an image becomes a target between crosshairs). As Steyerl acts as both editor and the woman with the movie camera (for her short discussion of Vertov, go here), the exhibit explores an area of overlapping influence between subject and object; aptly, one of her pieces is entitled Adorno's Grey.

Journalist and PKK revolutionary Andrea Wolf is an ever-present proof of synthesis in the show. In November, we see a young Wolf as a leader of a motorcycle gang (that includes Steyerl) in a Russ Meyer homage. In Steyerl's films, builds happen, not sequences: someone discusses the usage of Costa-Gavras' State of Siege as a training film for young terrorists. See them kidnap, plant bombs, and evade authorities; learn that the film was based on first-hand, real-life accounts of resistance behavior. These films of bad-assery first appear as templates to turn an internal sense of (in)justice into action. They grow into an entangled relationship of images and events that map the formation and remembrance of Wolf's conscience. We may not know her details, but we have a sense of her motivation.

Rather than a fixed object affecting a relative subject or vice versa, Adorno strongly believed in the intertwined nature of subject and object, and that any action or change took place in their relationship. In Adorno's Grey, holes in the wall are leftover from attempts to discover the mythologized color of Adorno's lecture hall in Frankfurt. This is the only work in the show that includes physical installation: the civilized surfaces, along with a timeline of world events and Adorno milestones, preface the voiceover and film. It's also the only work in which the artist doesn't appear, and it seems strangely at odds with Adorno's proposed fluidity and the layered coherence of Abstract and November. Those works privileged relationships over separation and celebrated an eidos of a life or work that, while formed through a series of discrete events, can finally be viewed only in summary.