A collection of examples where pop culture was clearly inspired by smaller creative activities on the web (with some people not necessarily happy about it). With online chatter regarding the performance by Rihanna on Saturday Night Live and it's adoption to the net-art 'Seapunk' style, it's worth knowing that the mixed reaction is not an isolated occasion. Marketers employ 'coolhunters' to look out for interesting small cultural developments to make their artist's seem 'fresh' and ahead of the game, an activity that has been happening since the early 1990s, which was a key subject in William Gibson's 2003 novel Pattern Recognition. It is now becoming more apparent in our more modern technological age — here are some of the better known examples:

Chiptunes, the lo-fi music associated with soundchips of old computers and gaming consoles, started to make their way into contemporary music with one piece eventually leading to a file for infringement, the Timberland-produced 'Do It' for Nelly Furtado:

For a much more clearer comparison, the Demoscene documentary by Moleman breifly compares and contrasts the two songs.

In August 2007, an action for infringement was filed in the District Court of Helsinki against Universal Music, Ltd alleging Nelly Furtado's song "Do It" infringed "Acid Jazz Evening". In January 2009, after a trial that included multiple expert and technical witnesses, a three judge panel unanimously dismissed the plaintiff's case.

On December 17, 2008, Abbott also testified as a witness of prosecution in the Helsinki court in Gallefoss' case against Universal Music Finland. The Finnish court reportedly threw out the case after ruling in only one aspects of the three claims (sampling, performance rights, producer rights), and the case remains in appellate court, as of January 2010.

On June 12, 2009, Mikko Välimäki, who is one of the legal counsels of Kernel Records, the owner of the sound recording rights, reported that the case had been filed in Florida. On June 7, 2011 the case of Kernel Records Oy v. Mosley ended with the court deciding that Kernel Records had failed to register for copyright in the USA. 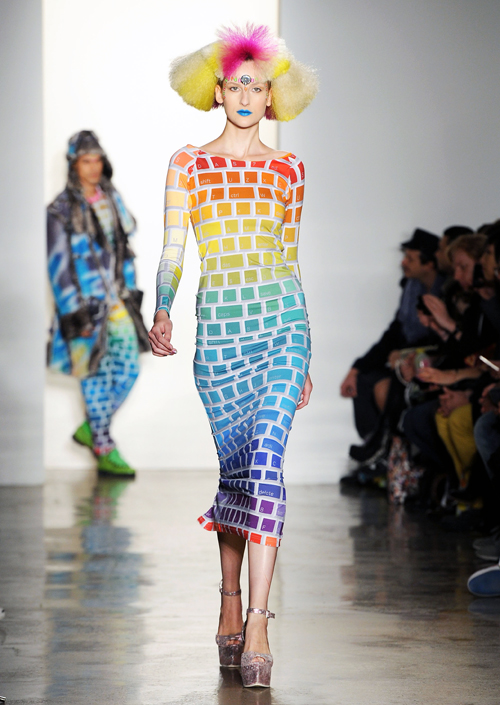 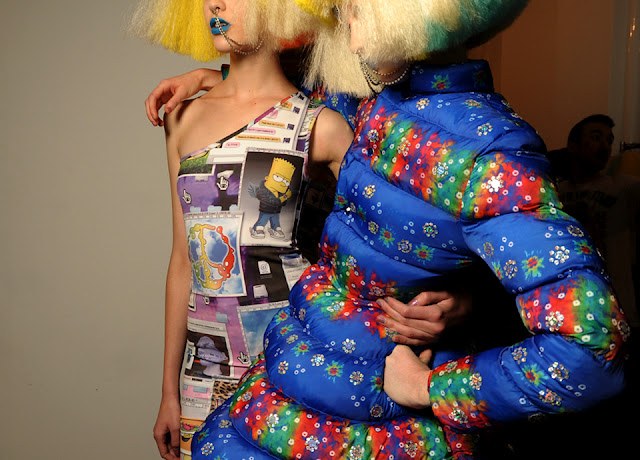 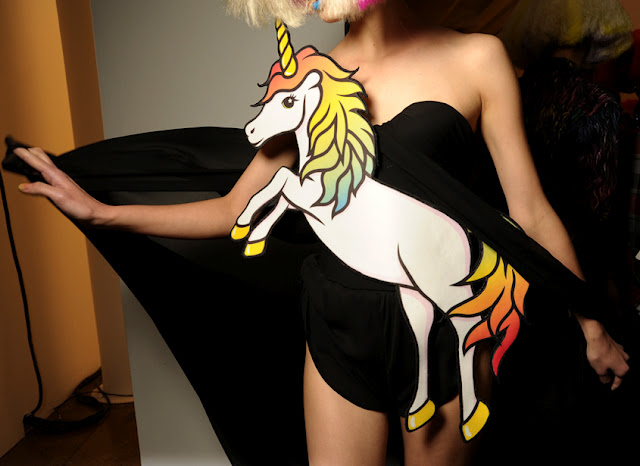 Jeremy Scott's Fall 2012 collection featured many references to the internet and 90's culture. In an article written by Emma Orlow for Refinery29, she explains her thoughts on the collection's connection to the many Tumblr blogs which document this style:


Jeremy says that his collection was inspired by the Internet, which is evident in his emoticon and mouse-clicker prints, but looking at the pieces was also a lot like looking at my Tumblr dashboard: girls with Kool Aid hair, bindis, and chain nose rings.

Still, I think there is something to be said about the “coincidence” of Jeremy calling upon the influences of his '90s Gwen Stefani-worshipping club days and today’s Tumblr girls who have been re-appropriating these very images of bindis, Unicorns on Acid, Lisa Frank, The Simpsons, and Kool-Aid hair on the Internet for years now.

I've blogged about Grace Miceli before, but Grace is a really rad artist who is inspired by Internet culture, and even has her own online art collective called Art Baby Gallery. A year ago, she posted a video on her Vimeo page called, "Alien Grooves 2," which features her friend sticking Lisa Frank stickers on her chest, quite similar to the Lisa Frank sticker bustier Jeremy Scott made this season. She seemed to agree, "It feels a little strange to see an older man commodify certain imagery, especially Lisa Frank's, which does have strong meanings for a girl who grew up in the nineties."

Davis was one of the few artists exploring and practising the technique of 'Datamoshing', a method which plays with video compression which creates distortions with forms and colour with the moving images. Then, in the lead-up to a forthcoming show with works employing this method, he started receiving emails:

'I woke up one morning in March to a flood of emails telling me to look at some video on YouTube. Seconds later saw I Kanye West strutting around in a field of digital glitches that looked exactly like my work. It fucked my show up...the very language I was using to critique pop content from the outside was now itself a mainstream cultural reference.'


The video in question was Kanye West's 'Welcome To Heartbreak' video:

Here is a video from the Creators Project interviewing the artist, which explores his work and discusses the Kanye West incident (as well as, ironically, showing a project where he was using footage from music videos featuring Rhianna and The Cranberries).

In 2001, a scene emerged experimenting with pop music, combining hyrbids of songs that become known as mashups or bootlegs. This scene was around before the internet with DJs making this kind of music, but with limited distribution.

The track, at one point, received a cease-and-desist letter from the company RCA (the label which manage both artists concerned). A 'legal' version of the track was brought about, but thanks to the complete forgetfulness of the effort, no online reference can be found of it.

However, the producer has gone on to better things - he eventually went on to remix a track for Aguilera, and work with Paul McCartney (wikipedia link). In the UK, the song was considered the song of the decade by the English newspaper The Guardian.