Drone's Eye View: A Look at How Artists are Revealing the Killing Fields
By Honor Harger 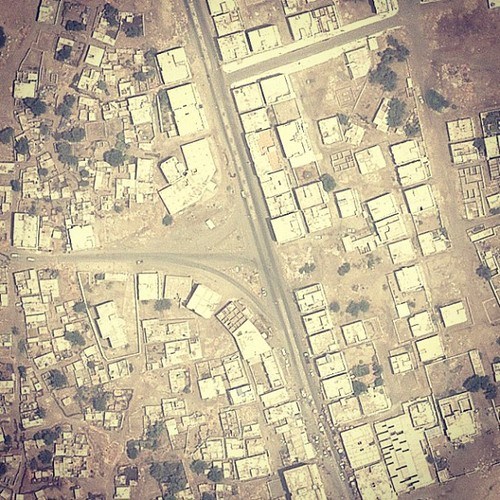 The unmanned aerial vehicle (UAV), or drone, has become one of the most potent weapons of contemporary warfare. Remotely controlled by operators thousands of miles away from the theatre of war, drones carry out aerial attacks which leave hundreds of people dead. The increasing amount of ‘collateral damage’ from US drone strikes on the Pakistan-Afghanistan border, recently lead prominent politician, Imran Khan, to lead a high-profile protest against their use. 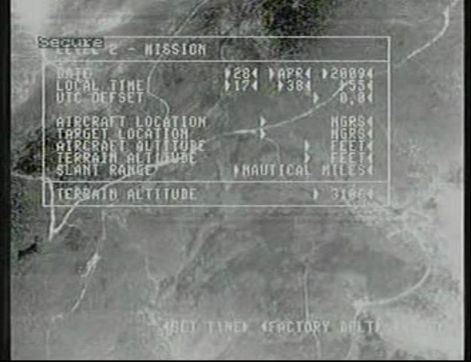 Artists have been actively documenting the impact of the use of drones in warfare for some years now.  Trevor Paglen’s Drone Vision, recently on show at Lighthouse in Brighton, provides us with a chilling “drones-eye-view” of a landscape, enabling us to see what drone-operators see. 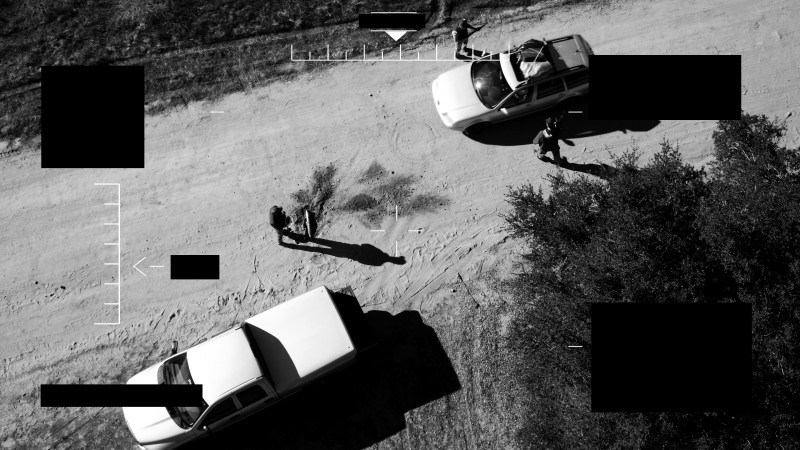 Five Thousand Feet is the Best by Omer Fast

The utterly compelling and disturbing film installation, Five Thousand Feet is the Best by Israeli artist Omer Fast, tells the story of a former Predator drone operator, recalling his experience of using drones to fire at civilians and militia in Afghanistan and Pakistan. At one stage of the film, he describes the use of what marines refer to as “the light of god”, the laser targeting marker, which is used to direct hellfire missiles to their intended target.

“We call it in, and we’re given all the clearances that are necessary, all the approvals and everything else, and then we do something called the Light of God – the Marines like to call it the Light of God. It’s a laser targeting marker. We just send out a beam of laser and when the troops put on their night vision goggles they’ll just see this light that looks like it’s coming from heaven. Right on the spot, coming out of nowhere, from the sky. It’s quite beautiful.” (quoted from Five Thousand Feet is the Best). 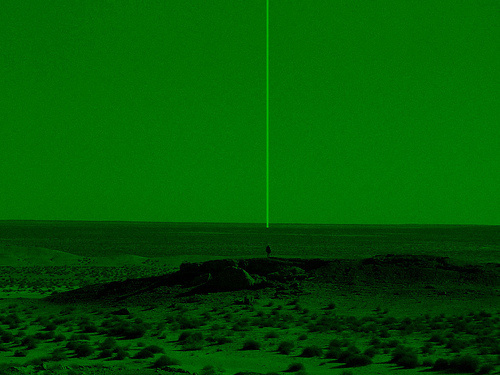 The Light of God by James Bridle

Writer, publisher, web developer and artist, James Bridle responded to this by creating his own work, The Light of God.

Sharing Paglen and Fast’s concern with the use of drones in warfare, Bridle has crated a series of projects which attempt to reveal their presence in the landscape. His Drone Shadow interventions are one-to-one representations of the MQ-1 Predator Unmanned Aerial Vehicle (UAV) drawn to scale within urban landscapes. The first was drawn in London this February (in collaboration with Einar Sneve Martinussen), and the second in Turkey this October as part of the Istanbul Design Biennial. 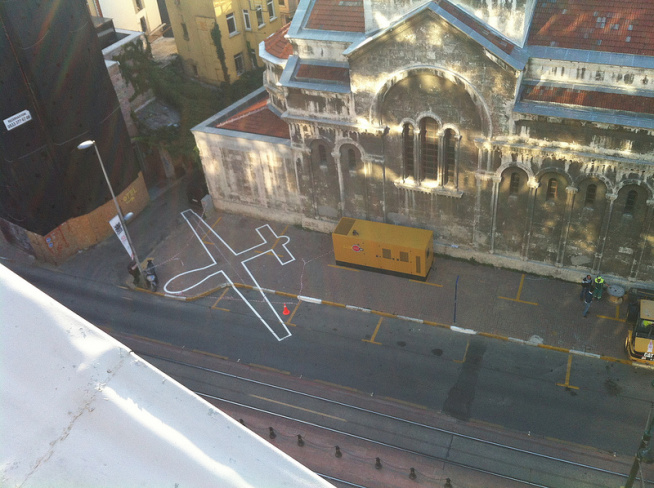 Like Paglen and Fast, Bridle’s work stems from a deep concern with increasingly invisible and seamless military technologies that are creating the context for “secret, unaccountable, endless wars”.

Bridle writes, “the drone also, for me, stands in part for the network itself: an invisible, inherently connected technology allowing sight and action at a distance. Us and the digital, acting together, a medium and an exchange. But the non-human components of the network are not moral actors, and the same technology that permits civilian technological wonder, the wide-eyed futurism of the New Aesthetic and the unevenly-distributed joy of living now, also produces obscurantist “security” culture, ubiquitous surveillance, and robotic killing machines. [....] We all live under the shadow of the drone, although most of us are lucky enough not to live under its direct fire. But the attitude they represent – of technology used for obscuration and violence; of the obfuscation of morality and culpability; of the illusion of omniscience and omnipotence; of the lesser value of other peoples lives; of, frankly, endless war – should concern us all.”

His latest work, released last week, is Dronestagram. Bridle has been collecting images of the locations of drone strikes, and sharing these photographs on the photo-sharing site Instagram. His intention is to make these locations more visible, bringing them closer to us, and in the process perhaps making the reality of the daily occurrence of deadly drone strikes more tangible.

He utilises public records from the Bureau of Investigative Journalism who document strikes as they happen in Pakistan, Yemen or Somalia. After confirming the location of a strikes, he then uses Google Maps to create a satellite image of the targeted location.  The image, accompanied by a description of the site, and the death-toll, if known, is uploaded to Instagram. 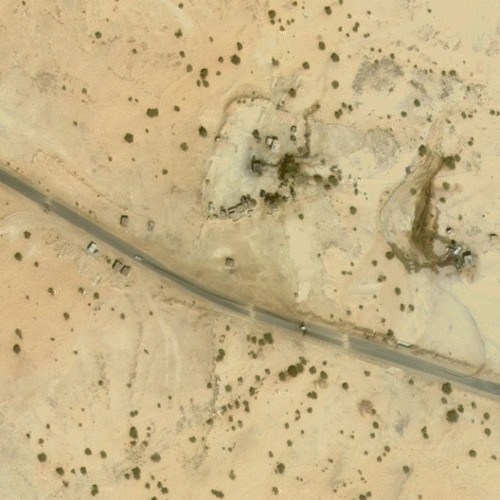 Image from Dronestagram by James Bridle

The images of deserted, barren landscapes and abandoned buildings have a sobering potency juxtaposed with with the banal pictures of pets and parties that populate Instagram. But it is what we don’t see that gives these images such an emotional power: the mortality.

Bridle writes, “drones are just the latest in a long line of military technologies augmenting the process of death-dealing, but they are among the most efficient, the most distancing, the most invisible. These qualities allow them to do what they do unseen [...]. Whether you think these killings are immoral or not, most of them are by any international standard illegal.”

The work of artists such as Trevor Paglen, Omer Fast, and James Bridle exists within a long tradition of artists bearing witness to events that our governments and military would prefer we didn’t see. But Bridle’s work is also part of an ongoing collective effort from both artists and engineers to reveal the technological infrastructures that enable events like drone-strikes to occur.

As technology becomes more ubiquitous, and our relationship with our devices becomes ever more seamless, our technical infrastructure is becoming ever more invisible. When our environment becomes opaque or invisible, it becomes difficult to interpret it, and act within it.  As artist and critical engineer, Julian Oliver recently noted, “our inability to describe and understand technological infrastructure reduces our critical reach, leaving us both disempowered and, quite often, vulnerable.”

Or as Bridle puts it, “those who cannot perceive the network cannot act effectively within it, and are powerless. The job, then, is to make such things visible.”

reminds me of Matthew Johnstone's 2009 work 'Modern Warfare' where he took real soundtrack of bombers and matched the actions to the then popular game… http://vimeo.com/28528488#at=4

In 2010 I made a fictional film about drones being used to control western urban centres. At the time I was very interested in the ambitions of removing decision making (and ultimately responsibility)from human beings