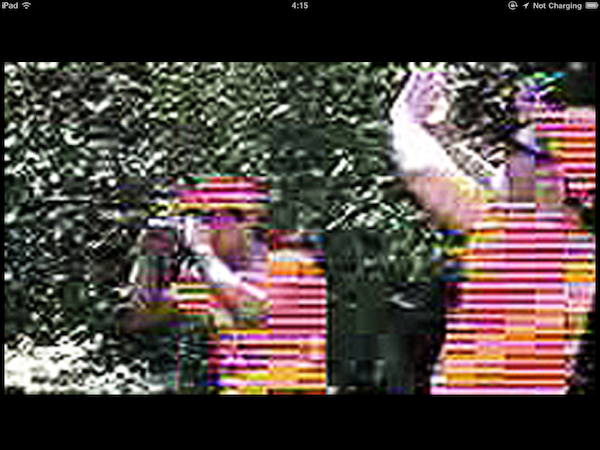 Locative media art responds to two of the most definitive social issues of our times: the reorganization of everyday life by mobile computing technologies and the seeming assurance of ecological disaster in the foreseeable future. These two developments are often described as conflicting with one another: our digital interfaces dismantle spatial obstacles, bringing once-remote locales into proximity with hyperlinks, projecting us into “non-places.” And yet, according to many environmental thinkers, any hope for sustainability requires that humanity reverse the psychic effects of this trend: we must divert our attention away from our screens and back to the physical world around us, creating local community and a sense of place. Locative media art works squarely within this tension inhabiting our post-nature, new media culture, using digital networks to augment engagement of geographic space, to facilitate what Christiane Paul calls “context awareness.”

On June 7 and 9, Tali Hinkis and Kyle Lapidus of LoVid will début their new mobile phone app, iParade#2: Unchanged When Exhumed, a 2011 Rhizome commission and the first major piece in their new locative-media art series. iParade#2 uses GPS data to access video, sound, and stories available only in specific spots within the Hamilton Heights neighborhood of Harlem. Tali and Kyle described the work to me as "experimental locative cinema" or "locative video,” as cinema and video that “offers a new option using GPS and mobile media technology.” Their press release suggests that the app be thought of as an adventure and a sort of game: participants will “explore” not only historic landmarks but also “urban mysteries”—though the mysteries remain unsolved. Ultimately, as is true to all locative media works, iParade#2 seeks to “renew viewers’ appreciation of their physical environment.” Since I will be abroad during the premiere, LoVid offered to give me a preview of the project.

iParade#2 is a merger of video and spoken word within a mobile media device, revealed at five pre-selected sites in Hamilton Heights. After I downloaded the app, iParade#2 found my GPS coordinates and provided a Google map with the designated stops. As you walk to each one, a musical soundtrack loops until the GPS registers that you have arrived on site. The phone then begins its poetic, descriptive stories with scrolling written text that is also read aloud. For example, at the “hungry tree,” a tree on the grounds of City College of New York (CCNY) that has engulfed a metal sign with a long-forgotten message, the text encourages you to imagine ritualistic activities mobilized around this mystical plant: “People with cameras are circling a tree. Their eyes don’t squint. Instead, they sway, arms swift, elbows bent, up and down.” Next, the phone plays video inspired by the tree, followed by a series of performative actions, and a collage of excerpts from 1950s films made by students at CCNY, the Hamilton Heights college where LoVid recently completed a residency at the Department of Digital and Interdisciplinary Art Practice. 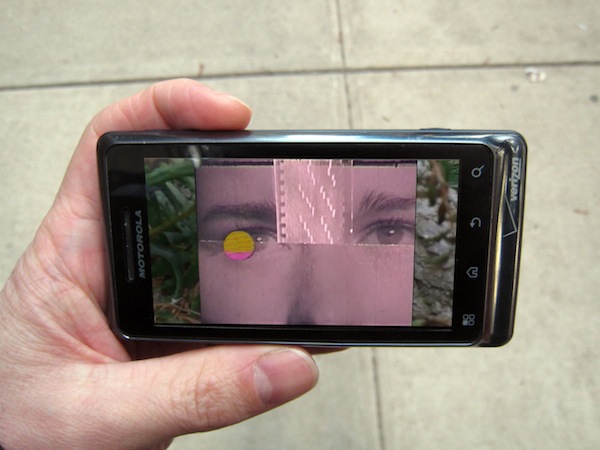 The project is a playful, intertextual way to experience the atmosphere and the historic anomalies of a neighborhood that I, despite having had lived in Harlem for many years, never visited before. The app follows the route of the Hamilton Grange, Alexander Hamilton’s home from 1802-04, which was relocated twice before it came to settle in its present location in St.Nicolas Park. The app’s backdrop is the CCNY campus, which bustled with students on the day I visited. Walking amongst them as my phone directed me to the next iParade site, I noticed the unique energy of this Manhattan neighborhood. The app’s looping soundtrack reminded me that I was a part but also apart—separated from the rest of street life on my iparade yet simultaneously connected as the app’s music merged with students’ chatter as they hurried down the sidewalk, late to class.

Immersing its audience in a convergence of contextual data—the physical neighborhood, the local history, CCNY student art, and LoVid’s response to their residency—while simultaneously networked to distant, invisible locales serving this location, iParade#2 creates continuity across historical, artistic, and technological scales: between past and present, between film and new media, between a U.S. founding father’s clicked-and-dragged home and digital networks. The effect is an aura of interconnectivity across time and space—an imaginative effort much appreciated in these times of environmental crises and pervasive computing.

Join LoVid for the iParade#2: Unchanged When Exhumed premiere. The artists will be hosting participatory walks through the neighborhood of Hamilton Heights on June 7, 7pm and June 9, 4pm and 7pm. Walks begin at 1619 Amsterdam Avenue at West 140th Street. To reserve your place for one of these free events, RSVP at http://www.elastic-city.org/walks/unchanged-when-exhumed. The app can be downloaded at http://itunes.apple.com/us/app/iparade/id523505718?mt=8. 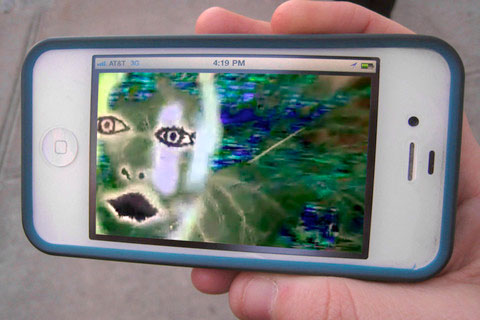