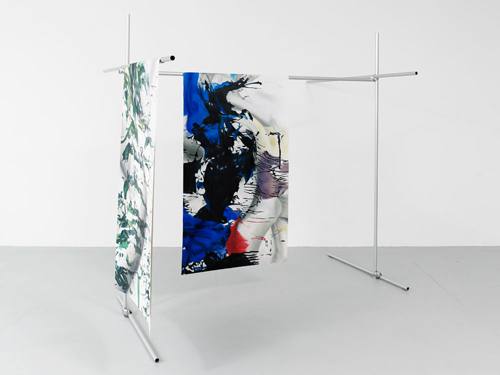 Your works bring together many strands of visual culture. Your paintings, for example, interpose art history, design, the natural world, and gaming. What does your image research look like? In a recent piece for Rhizome, Karen Archey wrote that your sensitivity is emblematic of the internet age, where all images are created equal. Do you think your work is affected by this characteristic of the internet? Does it mirror it?

Yes, I think my work mirrors this characteristic of the internet age, which also is reflected in and conditions my research process.

This conditioning applies not only to images but to information in general, I treat the two as the same. This flattening of values allows me to make art historical and sociological connections that scholars wouldn't necessarily consider making. However, I don't view my research process as a new thing relevant only to the internet age.

I'm also interested in comparing the idea of wandering through images and informations on the web to Walter Benjamin's idea of the flâneur and his experience of modernity. The term describes the experience of leisurely walking through urban space while observing various aesthetic and sociological patterns in the XIXth century Paris.

Recently I came across an article by Evgeny Morozov called "The Death of the Cyberflâneur," adressing this same parallel with Benjamin's flâneur and explaining how the cyberflâneur would disappear for similar reasons as those of the XIXth century flâneur—the internet becoming more and more enclosed in the world of social media, shopping activities, or separated apps. Benjamin also explains how the flânerie got caught in being conditioned by the economy and the market when the recently born commercial strategies of that time started using the flâneur and his casual attitude as a marketing tool. Benjamin notices how the flâneur began to occupy a politically ambiguous space, in which he is simultaneously being conditioned by this system and reacting to it.

This ambiguity is exactly what I am interested in, both as a phenomenon to observe and talk about and an attitude to embody in my work process. I think as the Flâneur in XIXth century Paris would experience and think modernity, cyberflânerie and its limitations are an interesting way to get a better understanding of our post industrial world. For instance, when I am using software I am not trying to make novel things with it. Instead, I try to emulate things people usually make and extrapolate from their attitudes. At this point, I can interject other observations I find during the virtual experience of wandering through aesthetic, historical and sociological phenomena.

Similarly, the sound pieces you create are patched mixtures and remixes of original and appropriated sound works. How are these similar to the ideas and techniques of appropriation and intervention into existing work that are evident in the paintings? In the context of sound, these works seem to also be in dialogue with trends in music along with art historical ideas. Can you talk about this more?

In the sound pieces I did for "Shanghai Gesture" and Helga Wretman's performance for "Etat de Choses," I isolated short samples taken from muzak database websites and blended them together.

On the muzak sites, songs are listed according to proposed textures such as: majestic/panoramic, bright/optimistic, exotic, anger/aggression, and so forth. The idea is that those sounds are designed to influence people psychology according to the one you pick. Even though the different moods generated by these samples are not meant to be mixed, it is easy to blend them together because the production of this music is so basic. I compiled the samples in Shanghai Gesture to have an exotic Asian sound texture—which is generally used commercially and accepted as a lifting form of music—and imposed it with music that was anxiety building. Similar to the way I use software programs to create visuals, I remain true to the methodologies of the genre. It is eventually presented as a sound piece. The irony is that I'm just making another muzak song.

Ed Ruscha Things Oriental (2011) is a series of oil on canvas paintings that was included in your recent show, "Shanghai Gesture," at Mark and Kyoko in Berlin. The original Ruscha 1985 painting is surprisingly similar to your own paintings, which provides a visual cue to the reading of the way you "misappropriate," as you refer to it, other people's work. What do you mean by "misappropriating"? Also, in this particular work, you add your own view of specific Chinese methodologies, histories, and sensibilities. How do you see the result of the interposition of different contexts?

I use the term "misappropriation" as it is used with scientific research. It's the idea of borrowing someone else's work or discovery as a path to find new ideas. For the "Shanghai Gesture" show, I was trying to take the attitude of a Chinese artist. Since I am occidental anyway, I knew I would totally fail.

I started to read a lot of fearful articles and watch lectures relating to Chinese international politics and looked into web posts quoting Chinese/Western bootlegs as much as I could. Through this research, I could of course get an idea of our own clichés and vague understanding of chinese contemporary culture. The opinion on China we get through the media misses so many parameters to really understand what is going on. For example, France is one of the European countries that struggles the most to integrate the Chinese market. And there is a lot of frustration going on there because of copyright issues. Then it was funny to learn that Chinese companies tend to be skeptical about making business partnership with French companies because there is a cliché there about the French being smart but too romantic to be reliable for serious business.

I thought I would try to learn as much about Chinese culture as possible. To an extent, I was borrowing aspects of China's cultural identity to gain access to different perspectives. Of course, I am aware that those new perspectives might be inaccurate or would become themselves new misappropriations, but it is more about embodying the attitude of loosing/gaining from translation.

It might look like difficult terrain to navigate. I feel better about my approach though, than that of the media simply pointing out oddities, like bootleg products from China.

I made a video called Naked Option that might be a good example of these misappropriations I use and where they can lead: I re-edited a very popular Chinese advertisement for an online-mall. This website misappropriates the term "naked option" as the name for their alternative system of payment—you can purchase goods with points but not with money. The original term, however, belongs in the world of finance and stock trading. A naked option is a risky trading position where the seller would own an option contract but not the underlying securities that protect this option contract on price movements. My editing of the video is a simple loop panning in a circle of three females who shout "naked option" in front of the camera. The final artwork is this part of advertisement frozen out from its original context and it ends up being lost in translation itself. But depending on your background, culture, and knowledge, you can read various things into it. 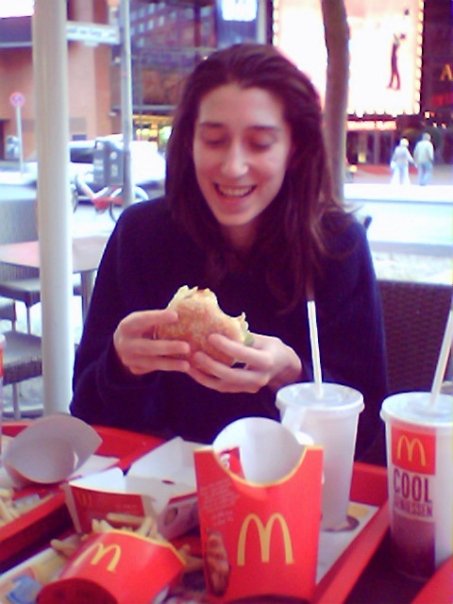 I started including technology in my work when I moved to Berlin three years ago, where I met all my current artist friends and became inspired by their work.

The first time I used a software for an artwork, I wanted to do some Rasta themed, Afrofuturist landscape paintings, and my friend showed me this 3D landscape generator from the 90s. I thought this aesthetic was perfect for the idea. As I was conquering the software and designing all those virtual fantasized landscapes, it evolved into a funny Rastafarian journey.

I studied painting at the Ecole Nationale Supérieure des Beaux-Arts in Paris. I was trained to paint like the old masters there.

I do mostly paintings and sometimes make objects. Since my work is all about connecting and translating information, it makes sense to translate them through different mediums.

I am starting to do more music-related activities: mixtapes, tracks etc. Recently I became a part of Beastonleash.biz, an artists/djs booking agency. If you want to listen to unknown precious tracks digged out from the depth of the internet, you should definitely contact us!

I've been a hostess for big commercial exhibitions. Greeting visitors and providing them with information. I had to learn everything that was going on in every of those events. I really like the aesthetic framework of exhibitions, and it was funny to be involved in the décor of it somehow. Recently I tried to reconstruct Struc-Tube, the first display system for traveling exhibitions.

Maybe Sigmar Polke—his works of the 1980s and later.

I collaborated with Aude Pariset on a duo show and we co-curated together as well. I have done music for the performances of Helga Wretman.

I research art history through my work process.

My bible is a chapter from Deleuze's Anti-Oedipus called "Savages, Barbarians, Civilized Men."

I dislike how fragile and sensitive to light digital prints are.

I think paintings in a way are so efficient. You just put the canvas on the wall, you won't even need to move your couch! Paintings are solid. If you use the right pigments and resin the paint will resist light and humidity so well. They are light, you can un-stretch and re-stretch them. Painting is both flexible and resistant as a medium and material.