Christian Marclay in the New Yorker
By joanne mcneil 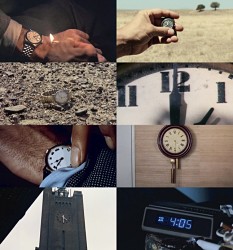 Great longread in the New Yorker this week about Christian Marclay's The Clock. Although I agree with Kenneth Goldsmith that the piece could benefit from greater discussion of the copyright issues he faced; the story behind how it was made is very compelling. It starts describing his move from New York, which meant leaving behind a larger apartment and boxes and boxes of bric-à-brac. In London his desktop became his studio:

Given his space constraints in London, Marclay decided that his first project would involve immaterial material—that is, digital media. Instead of wielding an X-Acto knife, he’d use Final Cut Pro. As he told me recently, sitting at his desk in Clerkenwell, “All I needed was this table and a computer” ....

“The Clock” is far too long to be presented on a DVD. The work is a computer program—coded by Mick Grierson, a professor at Goldsmiths College, in London—that, when booted, launches into whichever clip matches the time, down to the microsecond. The system, which archives the video and audio tracks separately, requires setup, and Marclay and a White Cube technician, Scott Martin, were present at virtually every city where the piece had been shown. (As carefully tended as the system is, mishaps can occur: at the Pompidou, “The Clock” mysteriously fell a few minutes en retard.)

If you're wondering why they aren't renting out bigger theaters for screenings, it's because the intimacy and the sound quality is so essential to the experience. The strength of The Clock lies in its uncanny intimacy, the ability to create a shared experience — a moment in time — between screen and audience. When you are stuggling to stay away at 4 am in the theater, the actors in the film clips are also yawning and sleepy-eyed. This something writer Daniel Zalewski explains quite well:

The video’s melancholy strain was, in part, an aesthetic choice, but it was also dictated by the material. We look at clocks, after all, in order to shackle ourselves to a schedule. In films and in life, eyes consulting a clock usually look disappointed, harried, or distressed. At 11:30 A.M., the point was underscored by a montage of jittery people shouting things like “I need ten minutes” and “There’s no time!” In Marclay’s hands, clocks became instruments that destroyed contentment, as when Julia Roberts, dreamily caressing Clive Owen in bed, realizes with dismay, “It’s twelve-fifteen!” ...

Some sequences in “The Clock” were inevitable—at noon, “High Noon.” But Marclay’s video rendered even that material strange. In Fred Zinnemann’s film, the fateful hour is preceded by a gallery of anxious faces intercut with a pendulum clock. “It’s condensed in the actual film,” Marclay explained. “I put all of that back into real time.” His video upended a central illusion of film. Theorists like Henri Bergson had dilated on the falseness of cinematic “duration”—the way that, say, the swirl of a long drunken evening can be captured in a set piece lasting three minutes. Marclay made the same point, but viscerally.

Though “The Clock” subverted many cinematic tropes, it participated in others. When a movie emphasizes that it’s five minutes to four, it’s meant to raise anticipation or anxiety. In Marclay’s video, too, there was an artificial rise in tension before almost every hour, and a slackening afterward. He decided to make comedy of it. The lead-up to noon accelerated toward mayhem, with flame-haired Lola running down the streets of Berlin while Debra Winger leaped out of bed in Algeria and Leonardo DiCaprio dashed to catch the Titanic. At 12:01 P.M., the video abruptly returned to boredom: Burgess Meredith, as a bank teller, silently putting up a “Next Window, Please” placard.

The Clock is currently playing in Ottowa, soon at LACMA, and will be back in New York eventually. Zalewski recommends the hours between 10pm and 7 am on the New Yorker blog:

Try to catch “The Clock” between 10 P.M. and 7 A.M. The passing of midnight is a highlight, as you might expect. But keep watching. The video always engages your mind, but it also tugs on your body, especially after midnight. The longer you stay up—after Klute, Mr. and Mrs. Smith, and dozens of other characters have gone to bed—the more giddy and delirious you feel, and you become one with the blearily agitated characters onscreen.