Embedded Structures: An Interview with Shilpa Gupta
By Yin Ho 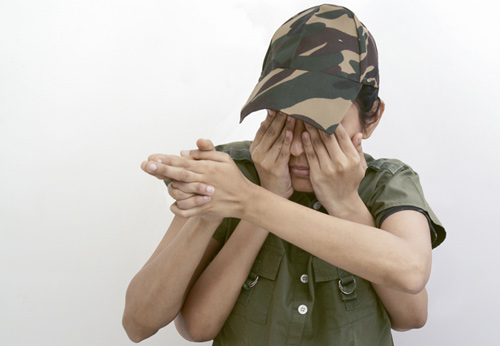 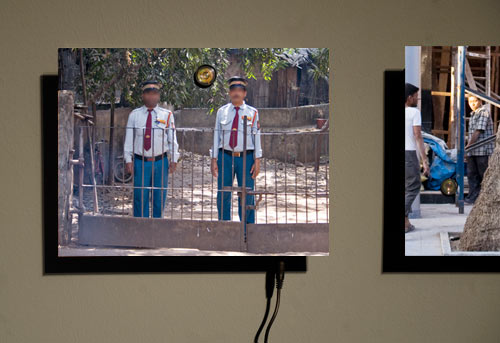 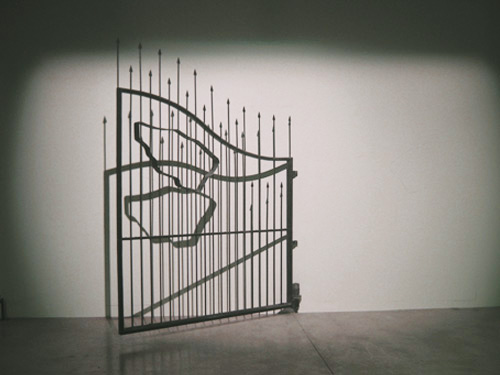 Untitled, MS Gate which swings side to side and breaks the walls, 2009

Shilpa Gupta's work sometimes takes place outside of or leaves the gallery, and ranges from photographs and objects to websites and interactive video. I spoke with the Mumbai-based artist over email:

Your pieces often weaponize subjects, drawing awareness to an underlying violence or militarization of mundane acts and objects (e.g., the tedium of house guards in Mumbai, a child with multiple arms making a gun with their fingers, a mechanical swinging gate). Could you expand on what you consider to be the political in the everyday?

What I am referring to are the embedded and often invisible structures that steer the way we think in daily life. Example: while we read newspapers and watch the 9 pm national news, it slips off our mind that the images we are seeing could be filtered in certain ways to generate certain opinions. Example: on the Untitled, MS Gate which swings from left to right and breaks the wall, there is an undefined form which, while much smaller in size, is far deeper than the rest of the gate. This could be an undefined geographical territory or it could be a hole in a brain of a housewife, both of which may have a desire to be free. 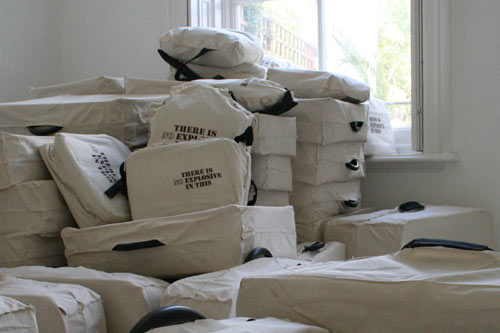 There is no explosive in this, interactive installation and photographs, 2007

There is a strong sense of place in your work alongside a sense that what you're conveying could be anywhere (I'm thinking of There is no explosive in this, in particular). Other pieces bring specific historical moments into focus, such as the speeches made by Nehru in Singing Microphones, a photograph of a landscape in search in Looking for Kurukshetra (the site of the battle in the Mahabharata), or in searching for soldiers in footage of the Kashmir landscape. How important is your location and background to exploring concepts in your work? 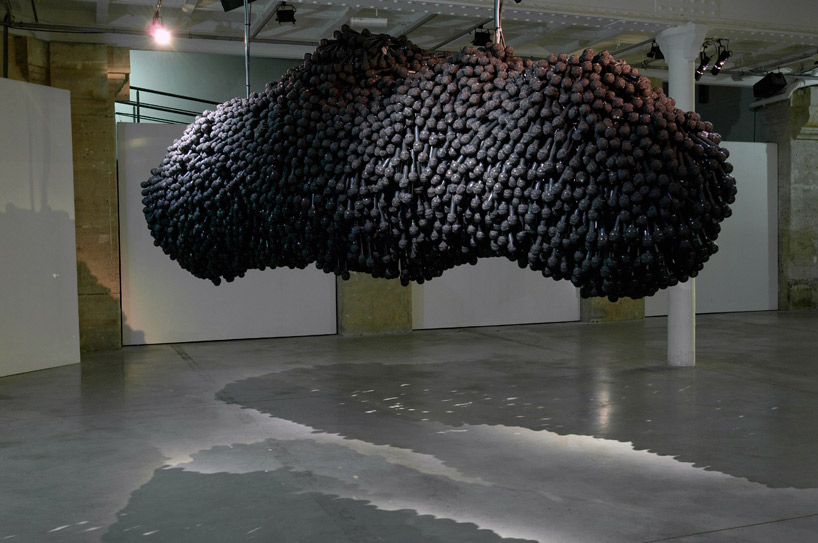 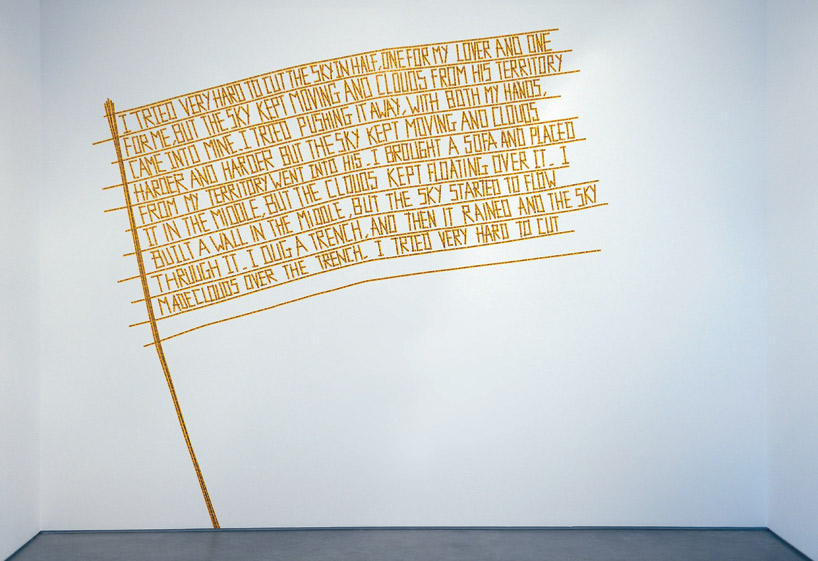 Pieces like Singing Cloud and Untitled (There is no border here) include text in the form of song or prose, respectively. How do you work with text? Are there particular qualities or sentiments of writing that you wish to highlight?

I work quite instinctively with text so there is nothing pre-planned. Though I do know the endform of the text — if it will be a wall drawing or will become an audio piece. It is not that I have a text with me, and then plan what the form will be. Both are integrated from the start.

blessed-bandwith.net, a Tate net art commission from 2003, and some of your other earlier sites of digital work have expired. Was this intentional? Does your work differ when you shift from physical to digital media? Does the preservation of digital art concern you?

What happened with Blessed bandwidth is that I had bought the web space for a certain number of years, five or seven (can't remember!). Then one day I got an email, asking me to extend it or not. I simply chose the second option. I felt it had lived a life and been online for a rather long time and had several visitors so it was ok to not extend it. There are then other physical works which also change, example: the Threat soaps become pale; I want to live with no Fear balloons deflate at some point; several outdoor photos tear. One is aware that several works can be temporary, which is how many things in life are also. What’s more interesting for me is the encounter, or the possible moment of exchange which is mostly always brief and always just a memory in the end. 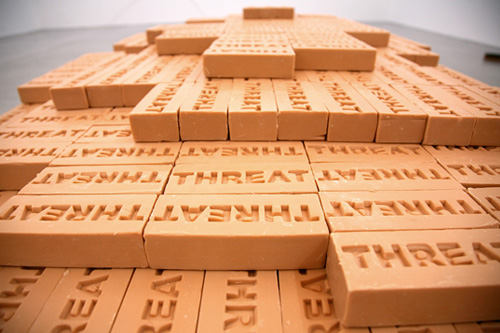 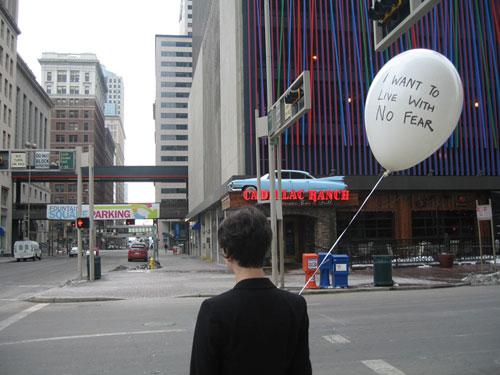 I want to live with no fear, printed balloons, 2010

I had enrolled myself into computer studies in high school. So in the beginning, it was studying the Basic language and programming. My art school taught traditional sculpture, so I attended several after-hours computer courses in little classes outside and learnt various graphic andanimation software. Later on, I studied web design. I have always been fascinated with logic driver programmes and the way they enter our lives which may not be all that logical.

While I use a lot of technology with sensor-based works and interactive video projections, I also use materials like soap, or even cellotape! I'm not particularly attracted to ‘high-tech’, and in fact, not quite comfortable when sometimes an elevated position is bestowed upon that new media. Various components become part of my work: a soap, a bag, brick, speakers, computers, audio, text, video, sensors, light, cellotape, etched metal plates, etc., which are all part of daily life. I'm interested in the distributive, interactive, and sensory aspects of technology, but I also offer viewers soap with "THREAT" embossed on it to take away from the gallery.