Jordan Crandall will perform his "philosophical theater" Unmanned at Eyebeam on Feb 25. The following is drawn from research previously posted to Nettime. 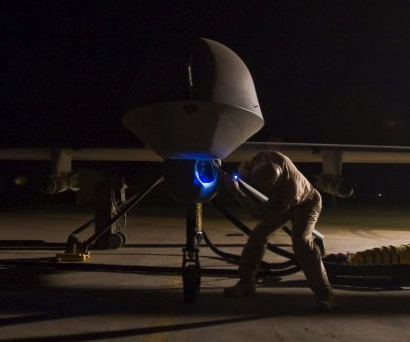 Nestled amid the sagebrush along the California side of the U.S./Mexico border is a small DIY drone airfield.  Makeshift and unkempt, devoid of pavement and infrastructure, it is unremarkable in the absence of the gathered assemblies of amateur pilots, planes, and spectators for which it is intended.  One might well overlook it, yet perhaps in some way it serves as a model of sorts, a harbinger of airports to come:  a preview of what drone airfields might look like, writ large, in their absence of traditional control platforms and optical infrastructures.  Much like this one, the unmanned airport would contain no centralized control tower presiding over the runway and no lighting tracks reflecting its contours.  There is no need for a commanding view from above.  The distributed and windowless drone, devoid of any interior, requires no human sightline for its flight.  In an operational sense, its trajectory is not visual.   Geometries of looking, whether from a cockpit or a control tower, have been replaced by networks of sensing.  Interior/exterior relations, at least in any conventional, spatially-continuous sense, diminish in their structuring relevance.

The demand for unmanned vehicles is not limited to state agencies.  Civilians, too, want their drones.  Weather researchers want to send them into storms to gather data.  Energy companies crave their use for geological surveying and pipeline monitoring.  Security companies want to send them up for traffic monitoring.  Farmers, for crop dusting.  Ranchers, for livestock tracking.  Commercial upstarts yearn to service them and train their operators.

Perhaps the most visible drone desire is that of the everyday consumer.   Homegrown drones sprout up everywhere, their production and operation facilitated by an expanding network of hobbyist groups and blogger communities.  Ignited by their prominent roles in sci-fi literature, television, and film, drones populate social and cultural imaginaries.  They appeal to generations of gamers, who relate to the control interfaces through which they are operated and the first-person-shooter style images that are streamed from them, often accessed on the very same computer screens upon which these games are played.

Drones are curious, kick-ass, and cute.  They embody a potent combination of menace and allure.  The wavering light of mystery, the harsh precision-target glare; the flickering transmission and the transcendent stare.  As there are entire websites devoted to the drone's fetishization as an object, there is a growing body of interest in its destruction and disappearance:  drone crash lore.   The erotic fascination comes from both the effective drone striking and the failed one being struck.   The pilot and the hacker.  The friend and enemy.   Exultant drones that gleam against a clear blue sky jostle with downed ones, however real or virtual, that explode in sprays of parts.

Stories are woven around downed drones and their sites however accurate they might be or outrageously fabricated they might seem, and enfolded into all manner of drone sightings, stagings, and speculations.   Captured drones are decked out in nationalistic finery, commanded to act in the service of ideals, helping to bolster public support and consolidate allegiance.  As drones are outgrowths of the histories of UFOs and robotics, as they have been integrally tied to warfare, war technology, and anxieties of invasion, however real or fictional, at least since the mid-twentieth century, the inevitable corporate and national spin that is woven around the accident and its aftermath is often, as with mid-century UFO crashes, seen as a coverup or conspiracy.  Drones are reported to belong to secret military programs in the testing stages.  They hover in the sky and then just vanish, like quivering projections of our unease.  They embody fears of our human limits, and desires of our transcendence.  Some believe that advanced stealth drones have been developed by reverse-engineering the flying saucer that crashed near Roswell.  (It's a small step from the unmanned system to the out-of-body experience:  the domestic abduction to the alien one.)

False specters -- lawless, renegade?  Genuine news items or outright charades?  Stories propagate with little or no verification, especially as they activate the imaginary, affirm ideological orientation, and offer easy munitions in wars of attention.  They amplify or diminish in scale and intensity as they become harnessed to personal anxieties, beliefs, and desires, aligned with group imaginaries and ethical codes, and enabled by communications platforms. They might create new conflicts or fuel existing ones, produce new images and dreams, rearrange or reinforce existing routines.

Drones slamming into Sunni political headquarters in Mosul, Iraq.  Nose-diving into the Wales airport runway.  Striking power lines and cutting off power in Alberta Canada.  Vanishing into Pakistan's tribal region in North Waziristan.  Plummeting into uninhabited terrain near Ghanzi, Afghanistan and the Indian/Pakistani border.  Collapsing into the Gaza Strip.  Plunging into the Mojave Desert.  Disappearing into Turkey’s desolate Mardin province.  Cannonballing into the coast of Spain.  Ditching into the Iraqi countryside.  Rolling with scrub brush across the rough desert terrain near Indian Springs, Nevada.  The Italian Air Force has discovered one of its downed drones floating along the surface of the Adriatic Sea, its body glistening in the sunlight like the bleached skin of a whale.

If a demo reel of Oscar-worthy drone crash moments were assembled -- perhaps in order to pitch the drone for a starring role in the ubiquitous action-adventure movie -- it would be composed of clips like these.  In true commercial fashion, it would seek to harness the drone's potent combination of desire and threat.  Like any good object of desire, it would give us what we want and what we fear.  As a conduit of identification and affect, it would allow us to extend ourselves, in all our sensory acuity, into a landscape devoid of everyday political rationales and ethical or moral judgments:  to plunge headlong into the melee.

The resulting drone crash action-adventure documentary would be geared for the everyday viewer primed for the economies of disaster, of pleasurable violence transmitted on private screens -- sites where drone games are played and drone missions consumed.  Its trailer might go something like this.  Ground control operators have suddenly lost control of an armed Reaper flying a combat mission over Afghanistan.  A manned U.S. Air Force fighter is dispatched to shoot down the renegade drone before it flies beyond the edge of Afghan airspace.  (In the world of robotic warfare, human pilots are apparently still good for something:  shooting down wayward drones.)  The tension builds:  disciplined man against chaotic unmanned.

The fighter plane arrives too late.  The renunciant Reaper, speeding headlong into its own future, crashes into the side of a mountain.  Abstracted in a shower of engine oil, smoke, lost data, and crushed composites, its dissipating fuselage drops.  Amplified in a rush of sensation and adrenaline, its absorbing body elevates.

Perhaps the doomed drone performs a more vital function than the exultant one.  It destabilizes the coherency of the vehicle and embroils it in a politics that was heretofore invisible or diminshed.  At the onset of the crash, the drone and its component material and discursive actors, occasioned by the reverberations of the event, are catapulted into a more public space, rendered newly exposed and available for affiliation.  A twisted geometry of spilt forms and unmasked roles, of networks sought and broken, the drone now offers itself to connection, continuity, and salvage.  The agential components of event and drone become newly active in their negotiations.  The catastrophe reveals an agential dispersal:  the network of the negotiation.

Yet at the same time, revealing the elements with which actors and events affiliate in order to maintain their centrality and force, the catastrophe orchestrates a consolidation.  It stabilizes relatively coherent or consistent forms that embody or heighten the specifics of the crash site, the actor, the part, rendering it singular, bounded, and unique.  The drone crash, both materially and discursively, is an event that both disrupts and congeals the dynamic.  It provides an exception, but also an amplification.  It dislodges conventional associations, allowing hidden infrastructures to be revealed and new ontological frameworks to take shape.  All kinds of novel players enter the scene.  The drone cannot be reassembled in quite the same way.