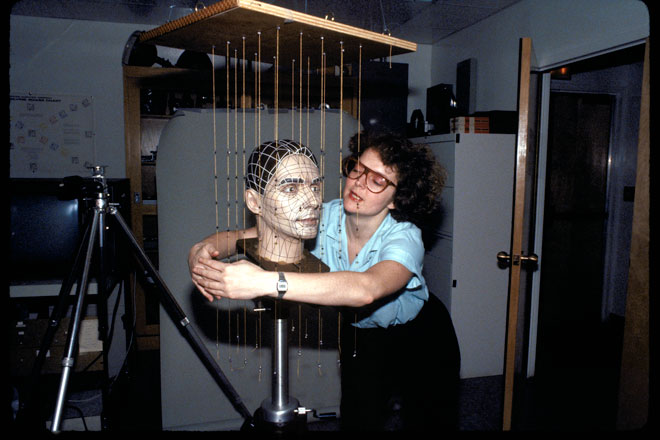 Geeta Dayal interviews Rebecca Allen, who created computer graphics for the video for “Musique Non Stop” and other 3d work:

Creating the milestone video, which made Allen a major force behind the German band’s visual aesthetic in the ’80s, was a painstaking process that took nearly two years for Allen and her team at the New York Institute of Technology’s Computer Graphics Laboratory to complete.

“Nowadays you can pretty easily digitize a 3-D object,” said Allen in an interview with Wired. “Back then, it was a very crafted process. I would have to put little pieces of tape over the models…. Then you put it in this reference cube, and then point by point you’d digitize.”

In the abstract video, animated heads flash across the screen. It took hundreds of hours just to get the colors exactly the way Allen wanted them. (See behind-the-scenes photographs of the creative process in the exclusive gallery above.)

“There’s so much involved — not just the color, but then you had to get the lighting … and it’s on some crummy TV, ultimately,” said Allen, now a design professor at UCLA. “But that’s the way I am. If you’re an animator, it’s already clear that you’re a fanatic — an obsessive. Anybody who wants to make frames for every second of movement is obviously pretty obsessive about things.”

The attention to detail paid off: The “Musique Non Stop” music video still looks prescient, even today. In Kraftwerk’s recent eight-day stand at New York’s Museum of Modern Art, the band made ample use of visuals gleaned from the video. Other pioneering music videos with rendered 3-D graphics sequences — such as Dire Straits’ “Money for Nothing,” which won Video of the Year at the 1986 MTV Video Music Awards — look dated in comparison...