In New Work #90 you capture the animated dotted selection lines common in Photoshop and present them as an animated image themselves. This feels like your bringing part of the interface used to make digital images into the final piece. Do you think the visuals of operating systems and software have made an aesthetic impact on digital works at large?

Absolutely, yes. I think this relates to a broader discussion of process-based or self-reflexive works that are indicative of a new modernist inquiry into technology as a medium. In many ways, this is a specific contextualization of many theories of the New Aesthetic but tied to role of process in understanding our relationships with these media, their implications, and functions.

Since 2009 you’ve framed your work as ongoing research concerning the “visual and conceptual process of image comprehension.” You’ve also done some experiments trying to produce animated GIFs as lenticular prints - taking the digital GIF into physical space. Have those experiments been successful and has that process changed your understanding of digital image processing?

They have been very successful, as well as some other processes intended to translate screen-based works to physical prints. I am currently working with Atelier Boba in Paris on a few other processes that address in some fashion the interaction with viewer and object. Our current project is an attempt to create UV triggered inkjet prints that shift over the course of small periods of time (3 weeks – 6 months) in response to their environments.

I am also in the production phase of a manual that details the experiments and process of the lenticular printing, the UV triggered inkjet, and the other various processes I am working on - that will be open-source and available soon.

Historical figures and antiquity are common subjects in your work. Is there a particular contrast you hope to draw between the tools you use to make your work and the subjects you render?

Not necessarily, however, I do hope to utilize the weight of the canon to circumvent the notion that media works or process-based works do not carry the same weight as art objects. Essentially, it is an attempt to parachute onto a polder to instantly exist within the canon of art history (ideally without the addition of nostalgia), and allow the media / technology to be considered as the art object rather than a hindrance to its understanding.

In the essay you contributed to pooool.info last September you put internet memes in the geographic context of polders, or small tracts of land enclosed by enbankments. Could you talk more about that analogy and how it might help someone understand the phenomenon of memes?

I use the term polder here very purposefully, and adapt the structure of the polder model to more broadly discuss the idea that we construct understandings of media collectively, and without consensus in defining media and its place in contemporary art, we would be unable to engage in any form of meaningful discourse. Memes, in a way, allow us to express that internet identity and function as some form of voting platform to shape the culture of collective. The viral spread of the meme helps define the boundaries of the polder that we share, and allows each participant to voice their opinion as the vote comes to the floor, adapting and resubmitting the meme as their participation in this democratic contextualization of our internet -- as a distinct and separate place from, but inherently related to the Internet. This relation relies most firmly on the polder model of isolation of land from the sea, and one aspect of the geographic feature most appropriately addresses the temporality of the structure – if you do not vigilantly and consistently maintain a polder, the sea will reclaim it. 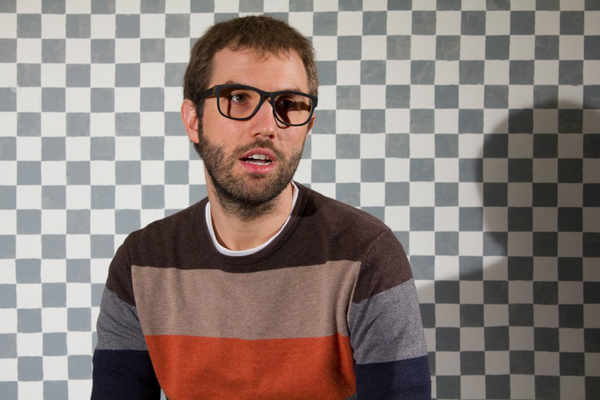 On and off for a decade, but I didn’t get serious about the engagement with technology as a medium until about 5 years ago. The more recent explorations started with looking at early meta-photographic work (mostly the Dutch) and wanting to expand that dialogue to a broader definition of photography (viewing photography as a subset of technology).
Describe your experience with the tools you use. How did you start using them? The vast majority of my experience with technology is through experimentation and the desire to test the capabilities of the tools I have at hand.

I still photograph, but generally as a starting point rather than a final product. My use of photography is an attempt to expand the notions of what a photograph is, and how that functions - essentially, to use technological mediation to highlight the role of photography as a medium. Note: here I am separating photography from technology as is common parlance, but I work under the definition that all augmentations of human understanding and capability are technology (writing, drawing, fire, etc.)

I write, curate, and keep a daily art blog http://www.ilikethisart.net, as well as organizing (or at least starting to) an online lecture series that allows for a broader dialogue with internet/new media work.

I am an Assistant Professor of Art at the University of Cincinnati, which has a huge positive impact on my practice as it allows me to focus on and stay engaged with my work while fostering the growth of young artists.

The internet. While understanding that this is a non-answer answer, I feel it is most reflective of how my practice of sourcing inspiration / influence operates. Clearly there are the seminal artists that I have an affinity for, as well as the aesthetics and concerns of early Dutch meta-photography, but I find their work less specifically influential than the constantly shifting tides of what I am looking at. In the process of keeping ilikethisart.net, I spend a great deal of time looking at work online, and that has had a tremendous effect on my work.

I have worked with several people on projects, and really enjoy the opportunity to do so. I collaborated with Adam Tindale on some color sorting projects in Canada and Paris. I will be conducting some research this summer with Atelier Boba (Ryan Boatright and Caroline Barcella) on the formulation of new, dynamic output methodologies, and I have also had a great deal of assistance on http://www.ilikethisart.net from a number of people: Wyatt Niehaus, Jacob Riddle, Nicholas O’Brien, Rick Silva, and Nate Larson.

Actively, no. But I do incidentally study art history quite frequently.

I do – my current two favorites are Vilem Flusser and Walter J. Ong.

As a product of the systems of internet/new media work, the production and dissemination of tropes and memes are a vital and important part of establishing a community of peers and collective understanding. That said, I often find that the frequently adopted structures of memes/tropes dull the potential effect of more critical works that have the potential to really engage with the possibilities of media.