Seven on Seven 2012
By Rhizome 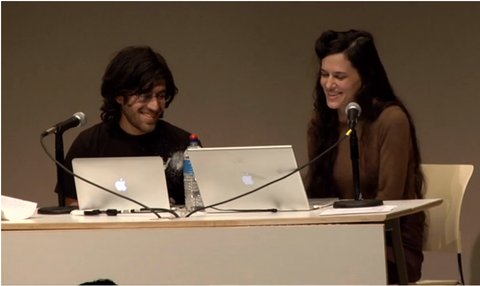 Presented by HTC, Seven on Seven 2012 took place on April 14th at the New Museum. It was organized by Lauren Cornell. Read the liveblog and The New York Times article on Aaron Swartz and Taryn Simon's project.

Douglas Rushkoff is a writer, documentarian, and lecturer whose work focuses on human autonomy in a digital age. He is the author of fifteen bestselling books on media, technology, and society, including Program or Be Programmed, Present Shock, and Throwing Rocks at the Google Bus. He has made such award-winning PBS Frontline documentaries as Generation Like, Merchants of Cool, and The Persuaders, and is the author of graphic novels including Testament and Aleister & Adolf.

Rushkoff is the recipient of the Marshall McLuhan Award for his book Coercion, The Jacques Ellul Award for his documentary The Merchants of Cool, and the Neil Postman Award for Career Achievement in Public Intellectual Activity. Named one of the world’s ten most influential intellectuals by MIT, he is responsible for originating such concepts as “viral media,” “social currency,” and “digital natives.” Today, Dr. Rushkoff serves as Professor of Media Theory and Digital Economics at CUNY/Queens, where he recently founded the Laboratory for Digital Humanism and hosts its TeamHuman podcast. He is also a research fellow at the Institute for the Future, and an advisor to Meetup, Shareable, and Codecademy.

Aaron Swartz (1986-2013) was the founder of Demand Progress, which launched the campaign against the Internet censorship bills (SOPA/PIPA) and now has over a million members. He was also a Contributing Editor to The Baffler and on the Council of Advisors to The Rules.  Swartz was a computer programming prodigy and activist who played an instrumental role in the campaign for a free and open Internet and used technology to fight social, corporate and political injustices. In 2000, at the age of 14, he co-authored RSS version 1.0, and shortly thereafter joined a working group at the World Wide Web Consortium to help develop common data formats used on the World Wide Web. Swartz was one of the early architects of Creative Commons and a developer of the Internet Archives’ Open Library, a free book database and digital library open to the public. He founded software company Infogami, and when it merged with online news site Reddit, he became a co-owner. There, Swartz released as free software the web framework he developed, web.py.

Taryn Simon is a multidisciplinary artist working in photography, text, sculpture, and performance. Guided by an interest in systems of categorization and classification, her practice involves extensive research into the power and structure of secrecy and the precarious nature of survival. Simon’s works have been the subject of exhibitions at the Louisiana Museum of Modern Art, Copenhagen (2016-17); The Albertinum, Dresden (2016); Galerie Rudolfinum, Prague (2016); Garage Museum of Contemporary Art, Moscow (2016); Jeu de Paume, Paris (2015); Ullens Center for Contemporary Art, Beijing (2013); Museum of Modern Art, New York (2012); Tate Modern, London (2011); Neue Nationalgalerie, Berlin (2011); and Whitney Museum of American Art, New York (2007).

Permanent collections include Metropolitan Museum of Art, New York; Tate Modern, London; the Guggenheim Museum, New York; Centre Georges Pompidou, Paris; and the Los Angeles County Museum of Art, Los Angeles. Her work was included in the 56th Venice Biennale (2015). Simon’s installation, An Occupation of Loss (2016), co-commissioned by the Park Avenue Armory and Artangel, premiered in New York in 2016. Simon is a graduate of Brown University and a Guggenheim Fellow. She lives and works in New York.

Jon Rafman is an artist, filmmaker, and essayist. His work centers around the emotional, social and existential impact of technology on contemporary life. His artwork has gained international attention and was exhibited in 2015 at Musée d'art contemporain de Montréal (Montreal). He is widely known for exhibiting found images from Google Street View in his online artwork 9-Eyes (ongoing).

Charles Forman is a movie maker, dreamer, product designer, and entrepreneur. He founded OMGPOP, a video game company, that developed Draw Something, and ultimately sold to Zynga. He co-founded Picturelife which is pretty much awesome. He has lived in Chicago, Tokyo, Seoul, and New York City. Gawker has called him the most interesting new millionaire playboy in tech, although this is pretty much untrue. He currently lives in NYC and is working on developing a movie.

Stephanie Syjuco creates large-scale spectacles of collected cultural objects, cumulative archives, and temporary vending installations, often with an active public component that invites viewers to directly participate as producers or distributors. Using critical wit and collaborative co-creation, her projects leverage open-source systems, shareware logic, and flows of capital, in order to investigate issues of economies and empire. This has included starting a global collaborative project with crochet crafters to counterfeit high-end consumer goods, presenting parasitic art counterfeiting events, and developing alternative vending economies, and other speculative propositions. Upcoming exhibitions include "New Photography: Being" at the Museum of Modern Art, New York (March 2018) and "Public Knowledge," at the San Francisco Museum of Modern Art (2018). A long-time educator, she has taught at Stanford University, The California College of the Arts, The San Francisco Art Institute, Carnegie Mellon University, and is currently an Assistant Professor in Sculpture at the University of California at Berkeley. She lives and works in Oakland, California.

Jeremy Ashkenas is a computer programmer known for the creation and co-creation of the CoffeeScript and LiveScript programming languages respectively, the Backbone.js JavaScript framework and the Underscore.js JavaScript library. Ashkenas has been a speaker at numerous conferences and events. He worked in the graphics department at The New York Times.

Khoi Vinh is currently Principal Designer at Adobe, Design Chair at Wildcard and co-founder of Kidpost. Previously, Khoi was co-founder and CEO of Mixel (acquired by Etsy, Inc.), Design Director of The New York Times Online, and co-founder of the design studio Behavior, LLC. He is the author of “Ordering Disorder: Grid Principles for Web Design,” and was named one of Fast Company’s “fifty most influential designers in America.” Khoi lives in Crown Heights, Brooklyn with his wife and three children.

Aram Bartholl's work creates an interplay between internet, culture, and reality. The versatile communication channels are taken for granted these days, but how do they influence us? According to the paradigm change of media research Bartholl not just asks what man is doing with the media, but what media does with man. The tension between public and private, online and offline, technology infatuation and everyday life creates the core of his producing.

Blaine Cook is a Canadian software engineer, now living and working in London, UK. He is the principal co-author of the OAuth and Webfinger specifications. He is the former lead developer of social networking site Twitter. He has also worked for Yahoo! on the Fire Eagle project and for BT Group as part of their Open Source Osmosoft team. He was founder of collaborative text editing startup Poetica.

Naeem Mohaiemen explores histories of the international left and the contradictions of nationalisms through essays, photography, film, and installation. Since 2006, he has worked on The Young Man Was, a history of the ultra-left in the 1970s, with each portion in a different medium. The latest installment of the project, United Red Army, is a film about the 1977 hijack of a Japan Airlines flight (shobak.org).

Mohaiemen’s essays include “Islamic roots of Hip-Hop” (Sound Unbound, MIT Press), “Asterix and the big fight” (Playing by the rules, Apex Art), “Live true life or die trying” (Visual Culture Reader, 3rd Ed., Routledge), and “These guys are artists and who gives a shit” (System Error, Silvana). The themes he has addressed in his work have been described as “not yet disillusioned fully with the capacity of human society” (Vijay Prashad, Take on Art). Mohaiemen is a Ph.D. student in Anthropology at Columbia University.

Anthony Volodkin is the founder of Hype Machine, which indexes hundreds of music sites to find the latest new trends in music. Hype Machine was called "the future of media" by Gawker and was on The Guardian's "100 Essential Websites of 2009".

Xavier Cha’s performance-based work revolves around modes of accessibility, exchange, and hierarchies of space and perception. Collaboration is often at play in her performances: Xavier has invited actors, dancers, musicians, conductors, martial artists, and clowns, among many other non-artist performers, to not only participate in her projects, but also to become protagonists in the work.  Through these events, ha formalizes subjectivity within contemporary culture, isolating elements of production, perception and communication into bare, abstract and often illogical experience.  In stripping away extraneous content, Xavier reveals phantasmic qualities of consumption, trends, and cultural engagement.

Michael Herf is the creator of f.lux, a software program used by over 10 million people that adjusts computer screens to help people wind down at night. Over the past six years, he has worked to model how the screens and light people see at different times of day affect sleep and health. With f.lux, Michael has shown a way to use software that works to support human rhythms and biology. Previously he co-founded Picasa (as CTO), and continued as its Engineering Manager after acquisition by Google. He spent his early years in the technology industry developing software for MetaCreations, Idealab! and Microsoft. He lives in Los Angeles with his family.

LaToya Ruby Frazier is an American artist and professor of photography at the School of the Art Institute of Chicago. Originally from Braddock, Pennsylvania, Frazier began photographing her family and hometown at sixteen, revising the social documentary traditional of Walker Evans and Dorothea Lange to imagine documentation from within and by the community, and collaboration between the photographer and her subjects. Inspired by Gordon Parks, who promoted the camera as a weapon for social justice, Frazier uses her tight focus to make apparent the impact of systemic problems, from racism to deindustrialization to environmental degradation, on individual bodies, relationships, and spaces. In her work, Frazier is concerned with bringing to light these problems which she describes as global issues.