Works like IT, HEAT, HIT, Owt and The Artist—among many others—approach storytelling through frenetic, non-linear progressions and cuts.  Narratives seem to emerge spontaneously from what seems to be your immediate environment without much premeditation.  Why is it important for you to develop language this way? What is lost or gained through such fragmented communication?

Anything that is not shown has to be imagined.

So here I am answering these questions, in the middle of the woods on this lovely Sunday afternoon on top of a beautiful big tree, water running beneath me…I shouldn’t drop the computer. Now it’s up to you to imagine how I got up here, the colour of the leaves and the smell in the air.

The condensing of films is a way of relating to our experiences, of the multiple textures we constantly have to deal with and how our brain constantly has to edit for us. The fact that a lot of the footage comes from my immediate surroundings is just me looking at what is around me – then I can start to create a story around, say the bread on the table, or whatever. It is a chance to look at things closely and then differently, to imagine things in another way.

But sometimes it’s completely constructed environments as well, like in, The Artist.

Regarding editing: An image can generate different meanings depending what you see after or before it. This is what triggers associations, connections and eventually narratives and this is the potential in the editing that I love. Spontaneity is also important for me. I need to make mistakes. If things are controlled and pre-determined then often I am not happy with what I am producing.

Problems bring new levels to the work. Lacking control is an important part of my practice. Losing interpretation of the work too.

For Frieze 2011 you made 28 black and white signs and scattered them around the fair.  The slogans on these signs propose nonexistent scenarios ranging from the banal to the absurd—ones that can be rendered impossible or absent from the viewers local control.  These works encourage a type of ‘escape’; a set of imaginative proposals used to confront the everyday, or a least the world of Frieze.  The signs follow in similar vain to your previous works: maze like encounters and convergences between fiction and reality.  How do you approach the dynamic between fiction and reality with these sign pieces? How do these worlds inform one another? What are its potentials?

Imagination plays a strong part in my work. I like that the work exists in the someone’s head, that someone created its own vision, re-imagined the space, placed or worked in its head. Words are the most powerful tool to conjure images without using an image itself. More powerful in fact because a new image is created each time. I don’t need to produce anything anymore. It can always exist differently in each interpretation. I like using subtitles in my films as the audience then uses their own voice. Reading the text, you are a bit more part of the process, more linked to the work.

Also it’s about reinventing the meanings of things and I don’t even have to create it as a visual response. It’s about what is not shown but lets you imagine a fork dancing. A way for me to work with the fictional is to always link it to things that are very obvious that are here now and start a story totally normal, slowly it getting weirder and weirder but then realizing you already in it. Also bringing relics to the film as a way to assure the reality of the fiction.

I create these fictions but always want to make conscious the position of the viewer, of the audience. So I pull you along and then stop and talk about the space you are reading this text within. Or how you need to concentrate. IDEALLY THESE WORDS WOULD TAKE YOU SOMEWHERE ELSE ALL LYING IN THE SUN ON A BEACH, the computers buried under the sand.

Ideally these words would make sense.

Our reality is imagined; only constructed through rules of social norms.

The actual materials that are used and featured throughout both your installations and videos are often found, hastily assembled and generally ‘sloppy’.  Additionally, your videos seem to be shot on consumer grade equipment as if ready to be uploaded to YouTube.  How do these materials inform your intentions and vice versa? Are they another attempt at imbuing everyday life with a ‘story’?

I like the everyday. I like the fact we mix fiction to reality or vice versa. How everyone and everything has its purpose. I quite like the quote of Marcel Broodthaers:

The fact that it’s low tech, that it’s footage I collect gives me a lot of freedom and therefore technology or the perfect shot doesn’t interest me so much. I had this sort of idea that I did not want to create attractive, pleasing things. I have this thing that I thought was too easy, going against the idea of improving the world.

My recent project was filmed on HD and with a crew so it’s not always like that.

You are the founder of the online moving image museum, tank.tv.  Could you explain your motivations for initiating such a project? Why showcase content strictly on the internet? What is inferred by the 'moving image'?

I am not the founder of tank.tv but I directed it at its beginning.

When Tank started in 2003, video art was a totally different thing and there were very few platforms or appetites to show it, so TANK was really useful in that sense. But I think its definitely preferable to view a projection or installation in person –you get immersed in the work a lot more than you can on a computer screen. I think the internet is an interesting platform to discover things to get a terse idea of someone’s work but I think it’s definitely not as a good as seeing a projection or installation. It has a different purpose, and sometimes when it’s made just for that purpose it’s doing something else, it’s interesting.

But its all just moving images, images moving from one to the next. Its not real. 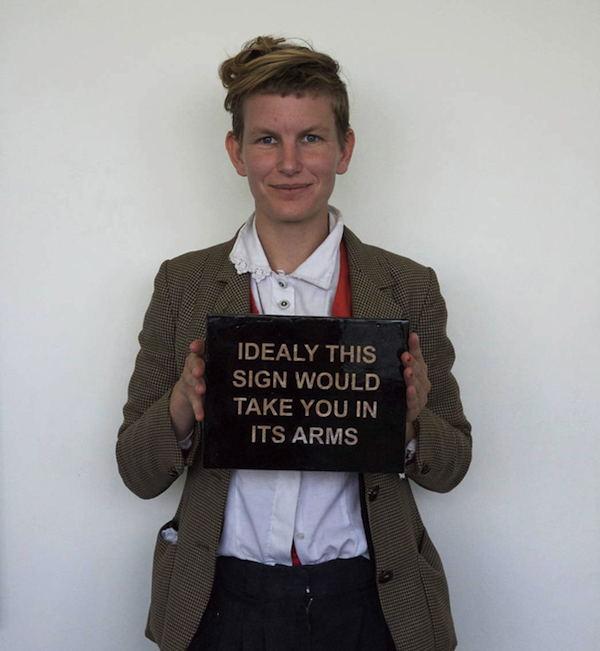 Since I am not 20, I’m not smooth with technology. But, moving images I like for its immediacies—not it’s technology.

I do things very basic, on Final Cut and with my own camera.

Film and Video. Fine Art at St. Marts London and then Goldsmiths London.

I just use sensors for light and sound. I find video funny as very straightforward projection, so much you can do with this already. I don’t want to lose myself in technical stuff.

I was running tank.tv and did many other things: worked in a cinema and made some jackets from blankets and curtain. Everything comes together and influences everything

Rory McBeth on the film, ‘The Wanderer’

I studied art history in Belgium.

Do you read art criticism, philosophy, or critical theory? If so, which authors inspire you

I am not so interested in interactive technologies. It becomes too much about the machines and loses the purpose of the work, I often feel. But of course it depends so much on how it’s used.