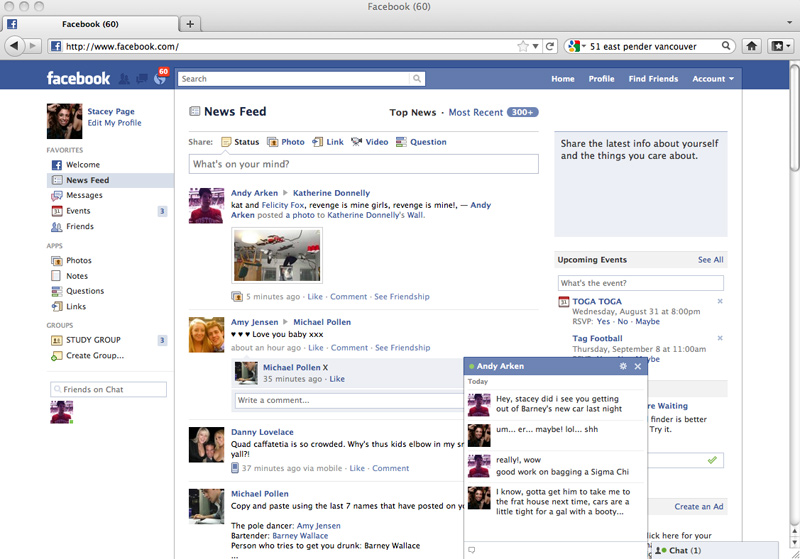 Could you tell me a little about your "Facebook sitcom" Dorm Daze? How long did the narrative play out on Facebook?

Dorm Daze was a performance conducted on a self-contained network on Facebook. Participants inhabited profiles scalped from real life American college students, which over three months were developed within a semi-scripted narrative - through interaction with each other and direction from me.

In general, social networking sites reward engagement with engagement, and those characters that invested most time within the community became the lead roles of the sitcom. The exciting thing for me was watching these local narratives develop, feeding into and accelerating the narrative as a whole. Further, playing out the sitcom over three months gave opportunity to bring in real world events; for example, one character became very involved in the Occupy movement, propagating within our fictitious environment at the same time as these events were kicking off all around the world. In fact series one ended on a cliffhanger when a group that evolved out of the occupy movement blew up Wells Fargo bank and took to the road.

Important also is that Dorm Daze was a piece in itself, but also a content generating system which has created material I’ve then been able to use in sculptural and installation works, brought together in the show The Hangover (Part II). Beyond these physical environments, the project has also spawned a book and a read only version of Dorm Daze 1, soon to be available for limited time only online. Recently, we’ve also begun talking to a TV network about the potential of turning it into a TV series. The point that this happens, the point that Dorm Daze becomes part of a cultural feedback loop in a very real, tangible way, is the point where things get very exciting.

Did the participants think of themselves as acting or gaming?

The skills used to generate and sustain a profile on Facebook have become incredibly nuanced and habitual, and in Dorm Daze I think participants’ characters existed in a very similar space to their real life profiles.

Characters informed their navigation of that with your previous experience of the real world; of its codes, conventions and understandings. So in a sense, and after a certain point, you’d be neither acting nor gaming; it’s more of a transferal of skills. Yet there’s this incredible dialogue occurring, always, between our experience of fiction and our experience of reality. So skills learnt during this hypothetical three month exodus would be reapplied in conventional reality, and so on, offering you a new perspective and an enhanced narrative within your original profile. Video games, cinema and even novels are all becoming as experiences more immersive, and I think there’s a sense of our culture courting this, collapsing the fictional/real binary and looking for a new space to explore. Facebook, cinema, the office - all these have tremendous value as locations, and as tools for grounding shared experience.

But to answer your question I’m not sure. I think perhaps different people framed it in different ways, and also this changed as the project developed.

And you've worked on another piece about American fraternity life with Animal House. Ironically, theirs is the level of debauchery most might expect from the art world. Is this a culture you've encountered directly or just over the internet? Is this a critical or ethnographic investigation?

Animal House was a series of college party performances which emulated the dorm/ frat environment. Over 200 people were briefed on their characters and actions prior to the event. The performances that they had all assigned were based on scenes from films, pranks and college scenarios, which played themselves out over the evening. It began directed but collapsed into chaos after people began to open themselves up to their characters and take on a certain mindset, I think that’s when it became most successful.

The Animal House/Dorm Daze are part of a large series of work that is looking at life stages, power structures and the narratives that surround them. The college moment is an interesting one because for those who attend, its the end of a unified story that started from birth. After college it becomes a lot more diverse; some people become farmers, others become reality TV stars. It gets messy after college.

I suppose this is a culture I’ve encountered directly, but which I’ve explored further and learnt more about in a removed sense through films and in a more direct way through the internet. Gang signs are a good example. It’s possible to have very direct encounters with these forms of communication - especially in the parts of London and Hollywood where I’ve lived - yet at first encounter you can only be a foreigner, an outsider to the information they convey. However, through a technology such as the internet, helped enormously by hip hop videos of course, a huge white demographic has picked up the terminology of gang signs to the point where an unconfident teenager might be pulling blood signs after beating a new level on Dungeons & Dragons - there’s this really weird cross-pollination of culture and experience. In a way this is what I’ve done with college life, explored which ways I can infiltrate a culture and what you can do with a language when you bring it into a new context.

Dorm Dazes had 35 characters. How do you plan to scale to 2,000 characters with Jefferson High?

Ideally Jefferson High would be a self directing network that exists solely on Facebook. Members would be taught to scalp real life High School student’s profiles and then with photos, images and likes build a new one. this would be the starting point for a new character. Linked by a headmaster they would be able to improvise narrative by interacting with each other as well as instigating direction through a forum on the Jefferson High website. To be honest its an ambitious project and maybe has its own failure contained within it, we’ll see.

A common criticism of Facebook is that users don't elbow its sides or push until it fits; in other words, Facebook shapes its users rather than is shaped by user activity. Following Dorm Daze, which seems a rejection of its Terms of Service and hegemonic structure; can you use Facebook for its expressed social networking purposes — liking, friending, messaging, etc and not subvert it?

I dont know, one of the after effects of Dorm Daze was this a disruption to Facebook, it must have looked off from Facebooks point of view, this self contained group in England existing as if they were in Berkeley California, characters liking things that went against their users preferences. So some senses it messes with their data but in another it brings committed users. 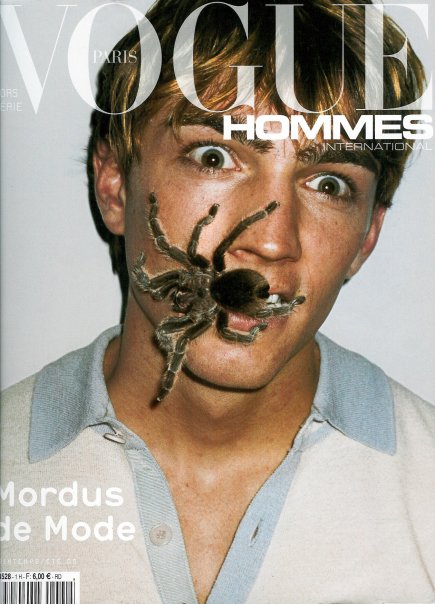 All forms of creativity probably involve technology at some stage. I’m happy to be grouped as part of the new technology / internet discourse, but my perspective is not technology specific, In fact my background was in performance and maybe that hasn’t changed.

Although the next phase is looking at new media culture, we’re graduating and going to work, so perhaps this year the work will get technology centric.

Describe your experience with the tools you use. How did you start using them?
I joined Facebook in 2005 and haven’t looked back.
Where did you go to school? What did you study?
I studied at the Ruskin and the Royal College of Art but spent years in between working as a data analyst, first contractually and then freelance. It’s amazing the information that is given over to you, I still have somewhere an entire report on the optimum consumer conditions in which to sell baby food, although I haven’t found a use for it yet.
What traditional media do you use, if any? Do you think your work with traditional media relates to your work with technology?
I find it very hard to draw a line between the two; the websites, social networks, sculptures, companies, music, books, clothing all feedback back into themselves.
Are you involved in other creative or social activities (i.e. music, writing, activism, community organizing)?
In my data days I used to be quite involved in a couple of economic strategy groups but now I’m busier with art I don’t have the time; all I’ve got left is the wardrobe. I also started Frat House records, which keeps me close to music.
What do you do for a living or what occupations have you held previously? Do you think this work relates to your art practice in a significant way?
I invested all the money i made as a data analyst but that’s all coming to an end now. The skills I learnt there definitely informed how i look at things.
Who are your key artistic influences?
Todd Philips, George Clooney, Nicolas Cage, Josh Schwartz, Stephanie Savage, Edward Bernays, David Allen.
Have you collaborated with anyone in the art community on a project? With whom, and on what?
I sometimes feel a little uncomfortable with the fact the work goes out under my name. Most of the work is a collaboration in some way, sometimes involving hundreds of people, sometimes its an intense dialogue between one or a couple of people. Also I think the way i make art is closer to running a small company or producing a film.
Do you actively study art history?
No. You can’t escape where you come from which for me is definitely an art / art school background. But I’m not into art references in art. I think the conversation in advertising is probably ahead of whats being talked about in most art magazines. And it’s hard to make anything new if you constantly have one eye on the past, screw the art history..
Do you read art criticism, philosophy, or critical theory? If so, which authors inspire you?
Currently I’m in a business/productivity manual phase. As much as I don’t believe in zeitgeist or any other essentialist notions of culture, I feel that these have a lot to say about contemporary ways of thinking. They are to popular culture what e-flux is to art. Also, Tom McCarthy as a contemporary author is fascinating, although I don’t read as much as I should. I do try to watch a movie a day.
Are there any issues around the production of, or the display/exhibition of new media art that you are concerned about?
No.